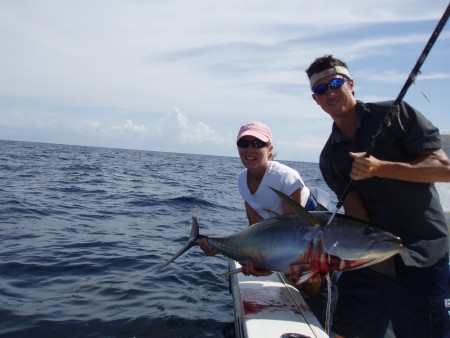 Debbie Bowman, Susan Atchley, Kelly Smith, Laura Marshall and I headed out for our annual "Girl's Offshore Trip" last Saturday. We decided to stay in Venice the night before so as to be well rested for our big day.

A rare cold front blessed us with some crisp weather along with a little more W-NW wind than we would have liked, but we quickly loaded up tons of food and drink on the 32-Twin Vee. The excitement at the marina was high as Capt. Hunter and his mate, Woody readied the boat and we eased out of the slip at 5:45 a.m.

With two 350 Yamaha Four Strokes pushing the vessel, the ride down the pass was quick. We crossed the delta and after a quick stop to load the livewell with plenty of frisky hardtails, we headed south.

Upon our arrival at the rig, the tuna were free jumping, which added to the groups excitement. Laura was up first, and got to feel the pain a tuna can dish up right away. With some much appreciated coaching from Woody, she landed the fish and collapsed on the bean bags. Next victim was Susan A. who had it a bit easier with a just legal fish. On to Debbie and Kelly who both got small tuna, and then me...more of the same...just a small yellowfin. All of a sudden, a big blue busted close to the rig so we sacraficed my yellowfin in hopes of tempting the marlin. No luck on the marlin, but something stole our tuna as we were reeling it back in, along with Hunter's marlin rigging.

Around 11 a.m. things started to get right and the bite got better. All of us landed yellowfin in the 50-60 pound class, along with the occasional barracuda, blackfin, and bonita to keep the arms stretched.

The seas started to build around 4 p.m. so we called it a day and got the boat ready to face the head seas on the ride North. I'm sure glad we were in a catamaran!

Back at the dock, Hunter and Woody cleaned the fish and there was plenty of tuna to fill all of our big ice chests.

The ladies were so excited, they called all their friends and it looks like there will be plenty of trips hitting the books shortly.

Thanks to Capt. Hunter and his capable mate Woody, for their patience and professionalism in coaching some of the less experienced ladies on the fine art of tuna wrangling.
It's a wonder they could even MOVE around the boat after all the food we fed them.

If you are ready to tangle with some fat yellowfin tuna, speedy wahoo and tough amberjack give me a call and we'll get you scheduled on one of several of the fastest and most comfortable vessels in the Gulf of Mexico operated by captains who fish full time and give it their all.

September and October are great months to fish and the Midnight Lump Season (JAN-MARCH 2010) will soon be upon us.
Call soon so you won't be left at the dock when the action heats up!

Geaux_Coastal
Way to geaux girls! Glad you had a successful trip Miss Susan and that you finally go tto get out and go fishing. I am sure Capt. Hunter was GREAT!!
Reply

Capt John L
Looks like you gals are posing for the upcoming Venice calendar for 2010! Great job with a great guide, Susan.
Reply