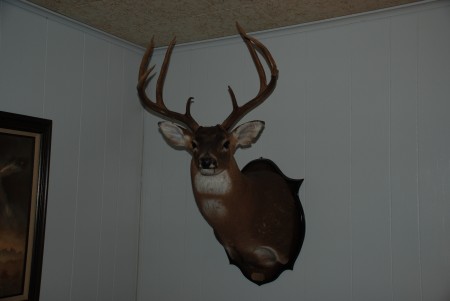 I was reading the post by speck master with the picture he has of a nice 8 point he took and you said if we had a picture of a 140 class 8 point you would like to see it. Here is the picture of the buck I took in Vernon Parish in 2004. 20 inches inside, 11.5 inch g2's, his main beam on the left side was damaged and acorned, but he is for sure a 140 class 8 point.
Reply

ZackCreekHunter
Thanks
2004 was before I discovered Louisiana Sportsman and way before I located this site. Now I spend a lot of time on this site.
Reply

FF_T_Warren
?
No doubt that is a beautiful deer and a great kill, congrats on that. But is that even a whitetail deer. whats up with the spots on the shoulders. is that just a weird photo angle or what. but to me that doesnt look like a whitetail
Reply

kjs123
spots on the shoulders
look like scars to me, my buck is full of them from fighting or barbed wire fences, im 99% sure thats what that is, really nice buck, i like tha scares... adds character to him plus a double white throat patch!!
Reply

FF_T_Warren
oh ok
yea I never thought about that. never seen a mount with them on it
Reply

Andy Crawford, Louisiana Sportsman
Scars
Hey, Warren, the only deer I have mounted (a nice 8-point that probably goes about 120) is slap full of scars. In fact, one of its ears is split from a fight.

If the deer won the fight, I'd hate to see the other buck.
Reply

ZackCreekHunter
Those are 00 BuckShot holes!
That buck took 5 loads of 00 Buckshot.
Reply

ZackCreekHunter
Long Long Story
That is the first real big deer I had ever seen in the woods. I shot him (the first time) on Nov. 21st about 30 minutes before dark. I was hunting in a climbing stand, he came out behind and to the left of me. I shoot left handed so I had to stand up before I could shoot. All I saw was that he was a big deer and saw that big g2. He was walking and I shot just as he was going to go behind a tree and be out of the bowl I was hunting. I knew it wasnt the best shot, but I got good blood. It had been raining for 3 days straight and was still drizzling, so we took up the blood trail. Well we jumped him up and I thought it was over, that I would never find him. So we went home and gave him the night, I didnt even want to go back because all the rain that night I knew there would be no blood trail. Did not even put a 3rd shell back in my gun (turned out to be a dumb#** idea). So the next morning I walked toward where I had last heard him, and believe it or not he was there, but he was not dead. He stood up about 40 yards in front of me with those huge horns. I shot him again right behind the shoulder, hit him hard. Took a second shot, but was shaking so bad I hit a tree about 2 foot from him. He limped off, I lost it, started shouting for my dad to brind me more shells, he is almost deaf and thought I had killed him and wanted the 4 wheeler, so he shows up about 10 minutes later. I am all bent out of shape. We get back on the blood trail, this time he is dropping pieces of lung material. He crosses a flooded creek. So I walk a log across the creek, do not take my gun, because I have to use both hands to get across. I find where he crossed the creek, and there is just a pile of blood. Figure he is dead, especially after all the bleeding the night before, take back up the blood trail. Find him laying there staring at me at about 25 yards, have no gun and watch those big horns limp away from me again (he looks even bigger when he is walking away from you, believe me). Heartbreaking!! I go back across the creek, get my gun, track him some more, lose blood, go back across the creek, make my dad walk the log, and go back to where I lost blood. My dad picks up the trail, we follow, I can hear this deer walking in front of us. I RUN up to where I can see him, shoot him, he falls, gets back up and I shoot him again, again he falls and is still trying to get up so I put my last shell in him. Run up to him grab those horns and scream like a little girl!! So that is the reason for all those spots.

I know I made so many mistakes that I should have never found him, but I stayed with him, all this took about 5 hours the second day. Learned a lot that day, came home with a trophy.

Sharing the moment that I layed my hands on that monster with my father = PRICELESS!!
Reply

Mike Guerin, Louisiana Sportsman Field Reporter
.
Wow that is crazy story. Why didn't he die? Poor placement? Did the bullets mess up? If so what were they?
Reply

ZackCreekHunter
first shot was back.
Not sure exactly where the first shot was. Was using Federal 3.5 inch 00 Buckshot. Shot was about 45 or 50 yards, he was walking and slightly quartering away, so with 18 pellets dont know exactly where the was hit. The original blood trail was good, not hard to follow and it was still drizzling. He bedded down and we jumped him up, as stated, he had bedded up about 200 yards from where I originally shot him. And when I found him the next morning he was only about 150 yards from where he had bedded the evening before, so he was hurt pretty bad. When he got up the next morning when I found him, he just stood there and I shot him again. I really do not know how he kept going after the second shot, there was for sure lung material dropping from him. When I found him on the other side of the creek, he was bedded and just layed there looking at me for about a minute, but I didnt have a gun, when he got up he could just barely move. All I can say is that he was one tough old bugger that did not want to give up. And by the time it was all over there was no way to tell what holes went with what shot, because he was pretty well shot up. I was so give out with all the effort and emotional ups and downs that I had to get my dad & brother to skin him for me.
Reply