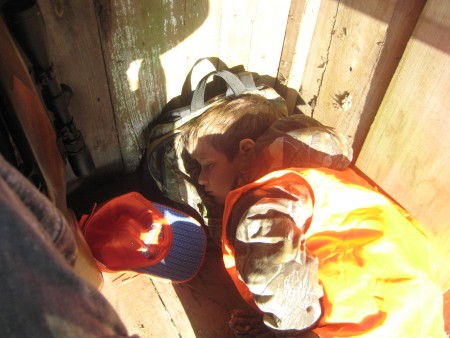 Here is Cade Conyers (my little nephew) with his first deer ever. (CONGRATS!!!) His dad Jason Conyers had to work this weekend.So I was able to take him. Saturday morning was the first hunt
he has made. As soon as we got situated on the stand
I looked down the food plot and seen a deer. Still almost dark,
we had to wait awhile before we could even tell what it was.
I was kinda letting him know that this doesnt happen all
the time! We just hit the time getting there perfect. after being able to see pretty good, we noticed another deer. Well it was a yearling with no spots but just to small to take the
moma from it.
After sitting there for 2 hours my little man could not take it anymore, dude hit the floor sound asleep. 2 more deer came out but I really and truely could not get him up ! Sacked out!! So that afternoon we went back to same stand and sure enough, 30 min into the hunt ,big doe about 75 yrds. I know I was shaking more than him.Got him set up and BAMMM!! Not knowing exactly were the hit was, we eased down there and found good blood.We went back to camp still not to sure about the shot. We looked over the footage and looked like an awesome shot!!
His mom (Nicole Conyers) , himself, and I headed out to track her. She didnt run 75 yards. And sure enough he hit her exactly were he was aiming. THE MOST AWESOME FEELING ANYONE CAN HAVE TO WITNESS THAT!!!!!!!!! Wish his dad could have been there also but someone gotta buy Cade his hunting supplies!!!!!!!!!!!!!!!!!!!!!!!
Reply

Bayou.
Great
Awesome job bringing the little fellow hunting.Congrats to both of you.
Reply

Bone-Collector
Congrats Cade
Awesome right there!!!! I heard the shot from my stand and told Colt that was a hit. I could tell by the sound. Congrats again little man and good job Splitlog!!
Reply

cajunkers
Congrats
Congratulations, I am sure dad is still proud.
Reply

erp1233
Congrats!
Awesome shot Cade, Keep up the good work. I hope you get to shoot one with your Dad soon. There is no words to explain the feeing of being there in he stand wih your son or daughter when they shoot there 1st deer. Mine shot 2 last year and 2 this year and it is still an awesome feeling to watch them. Happy hunting!
Reply

Splitlog
!!!!!
ALRIGHT SHAWN AND DERRECK, ITS YALL TURN TO SHOOT SOMETHIN!!!!! FIRST OF ALL SHAWN, YOU AINT GOIN HUNTING TILL THAT D@#$ MAP IS HANGING ON THE WALL!!! (I CANT DO EVERYTHING)
Reply