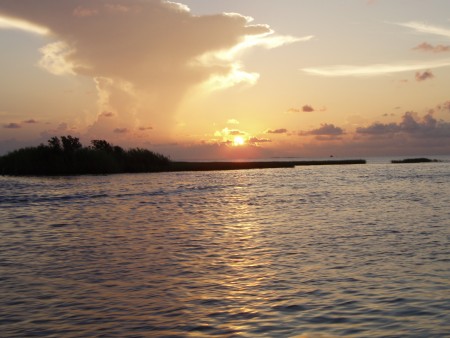 As a beautiful sunrise peered from behind an anvil-shaped cloud, four boats headed out from Cocodrie Charters last Friday loaded with outdoor writers from across Louisiana.

Our boat, a sleek and spotless 22-foot Bluewave, was captained by Henry Smith. My fishing partner for the day was none other than Linda Haydel of Haydel's Game Calls based in Bossier City, LA.

Although Linda has spent most of her time outdoors in a duck blind, by the time the day was over, she had racked up the largest specks in the ice chest.

We fished some of the oldest structure in Lake Barre' using live cocahoes on a carolina rig with 3/0 kahle hook. Our rods were furnished by CHALLENGER, and each writer took home his/her rod afterwards. We also had plastics, Paradise Popper X-Treme corks and Heavy Hooks supplied by Old Bayside. Berkley threw in some of their famed GULP! Peeler Crabs for good measure.

Working the bait slowly across the bottom without getting hung on the rock and coral formations took some getting used to, but once we figued out the pattern, it was on. We boated speckled trout, white trout and channel mullet in rapid succession. The sweltering heat made it uncomfortable at times, so Capt. Henry would "turn on the A/C" by running a few minutes to cool us down.

One of the first things I noticed about Capt. Henry was that he DID NOT fish, but instead made sure Linda and my hooks were baited and ready for action. Henry also took all the fish off and carefully measured each one of the specks to make sure it met the 12" minimum length. Another nice touch -- his boat was outfitted with a stereo, so we listened to the sounds of 100.3 "The Ragin' Cajun" while reeling in the specks.

Back at the Cocodrie Charters lodge around 2 p.m., all the captains (David Hood, Henry Smith, Pat Holliday and Tom Turner) cleaned and bagged the fish as the writers compared fish stories and snapped photos. On our next trip, we will surely plan ahead and stay at their comfortable lodge complete with home cooked meals.

As Chris mentioned in his earlier post, their boats, tackle and facitlies were immaculate. If you are searching for a place to hold your next corporate retreat or family outing, give them a call toll free at 1 877-524-3474. I promise you will not be disappointed.

Thanks to owner Jim Kessler and the staff of Cocodrie Charters for a wonderful Louisiana Outdoor Writers Association trip.
Reply

StevenReich
This is a great event for writers.
Reply