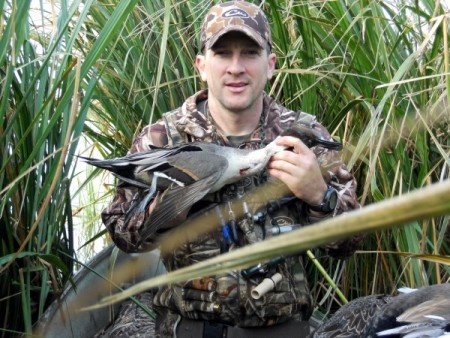 Happy Thanksgiving. The duck hunting continues to get better and better down here in South La. Yesterday was one of the first days that I have seen a lot of ducks,plus it was one of the windier days as well. The ducks weren't so much as coming into the decoys, but large droves of ducks in the v-shape moving across the sky...but way up there. . This is what we have been missing since opening day. It seems as though the ducks have arrived and are still coming. Yesterday was the first time we limited out before 7:00 a.m. We did get a late start but from the scouting trip the day before we figured we were in for a good morning. Most of the ducks that decoyed 100% were Teal, lots of blue-wings and green wings. The green wings would come thru in flocks of 10 to possibly a 100. Lots of pintail, very few with pin feathers yet. They would not decoy at first, after the limit was reached they would drop in without hesitation. The largest flock was about 30-40. The grey ducks and widgeon were plentiful as well but not as eager to drop into our decoys. Our limit was reached with 2 pintail, 1 widgeon, 1 gray duck, and 8 Blue and green winged teal. We held out as long as we could to try and add a green head or mottle duck to the bag that were buzzing around but they were just to smart for us. Tues. was a little bit different. The majority of the ducks wer gray ducks, and just like they have been doing most of the season. They will fly a straight line at the decoys, lock-in and land just outside of shooting range or circle, take a look and keep going. We ended the day with 5 grays although there was more shooting than ducks to show for our effort. The hunts continue to produce ducks. Of course some days more than others but that is what makes the good ones that much better. We still have open days to hunt, it should continue to get better. The amount of feed down here is very thick so we should hold onto the ducks that make it down, at least for a while.

Tony Taylor, Louisiana Sportsman
Thanks
Thanks for the report. Good to see things are picking up!
Reply