Another great weekend……hunting my favorite WMA. 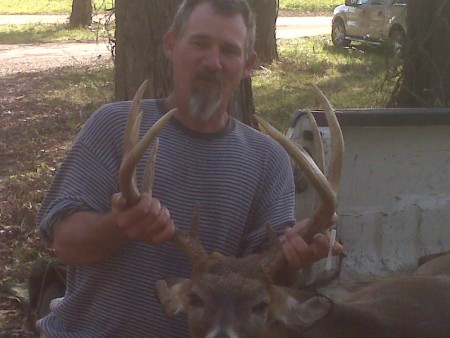 Me and the “CREW” headed up to three rivers to partake in a little, after thanksgiving, “Population Control”. The first morning yancy and I paddled around trying to get to a favorite stand but the water was too high. We returned to camp to see the guy camping next to us had killed a nice buck. After making a new plan we all headed back to the woods. That evening Yancy killed two hogs and everyone else struckout!
The next morning after seeing a doe but not able to get a shot; I decided to head towards Yancy because I had heard him shoot. A hog jumped up and I shot…….when I did hogs began to run everywhere. THEN…………it sounded like WWIII. Live Bait had left his stand because he heard yancy shoot too. They were standing together when a big boar ran by them. Nine shots later he fell dead…so did lots of trees. Doe meat and hog meat the same morning. Yummy! Me, Live Bait, and Yancy were the only ones to kill anything. The other 5 guys missed, slept in their stands, or forgot their oranges and could not hunt….I promise not to mention your name Mike!!! UNDERTAKER aka “tha Publicland Predator”.

Randy Norred
All I have to say is that some of the crew LIES, LIES and did I mention LIE!!! They know who im talkin about..
Reply

Undertaker
We only told you live bait killed a deer because you did not come hunting with us that morning. We would'nt have had as much fun if we didn't mess with you a little.
Reply

Randy Norred
I would have made the hunt if my wife was not sick as a DOG and needed me to watch the baby.. I guess you will get to experince this one day. Its not about "you" once the family starts. But its all good I just wont believe you anymore...
Reply