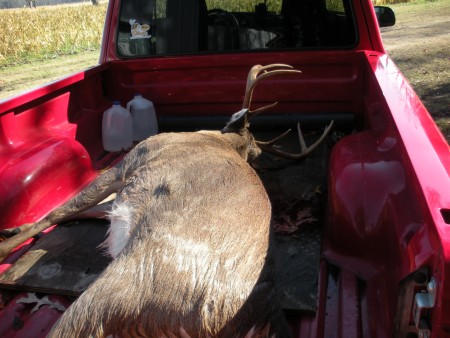 I went up Wednesday night and scouted all day half in Tendal, and half on the South end. I knew about this large bodied 8 point via scrapes and big rubs since Thanksgiving. However I was not in the lotto hunt so I prayed no one who was would venture back there. Well, I checked it Thursday and he had scrapes as big as a truck hood all over- fresh. Big rubs also.

I passed up many, many smaller fresh rubs and scrapes. You have to fight instinct and pass up the 4 point, small 6 stuff. If you're a numbers person you'll have a hard time ignoring the shovel handle sized rubs.

Anyway, I knew I was in a hot spot. I crept in with my red light early Saturday and climbed up. He came along at 6:30, pawed a scrape, and crept slowly through the thicket 15 yards away. He stopped and I had a clear window. Boom!
It was 26 degrees. I broke a spoke on both buggy wheels, though they were plastic.
I am getting him done in Semi-Sneak pose.
Reply

feeshfry
nice lookin buck
no disrespect, but i would like to see a pic of the front side.
Reply

bolo
That thing is huge! What did he weigh?
Reply

Lamplighter
Surprisingly, only 205 lbs. Our A Frame was not high enough for him to clear the ground when weighing him, so we picked up one end till his head was off the ground. I guess it should be accurate.
Reply

Andy Crawford, Louisiana Sportsman
Man, where was that deer when I was sitting for 11 1/2 hours on Saturday? LOL Congratulations, bud. Good to know someone had luck.
Reply