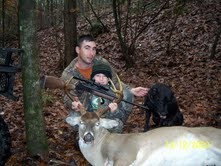 A Hunting Trip to Remember

It was before sunrise on the morning of Sunday, December 13, 2009, when six-year-old Cullen Edmonston looked at the cover of a hunting magazine and said, “Daddy I’m going to kill one like that this morning”. Little did they know, the statement was soon to be a true one.

Cullen was shortly after sitting on the stand with his father, Cody Edmonston. At 7:45 am on their lease in Brookhaven, MS the very proud father’s dreams were about to come true; to see his son shoot the deer of a lifetime. A buck stepped out into an oak bottom to feed on some acorns. While sitting on his dad’s lap he squeezed off the shot at 62 yards with his Rossi Crack Barrel 243. With its tail tucked, the buck took off into the thick brush. Still shocked that the young hunter was able to make a shot through the thick brush on his first hunting trip with his own gun, the duo started to make their way down their 15 foot ladder stand.

Shaking with excitement they began to look for blood. When they found a good blood trail Cody and Cullen went back to the camp to get the dogs. The Edmonston’s 2 Â˝ year old Black Lab, Boss, and a friend’s (Dagan Fife) 6 year old Yellow Lab, Dixie, were quickly on the trail. Within minutes, the two blood dogs had quickly found the 215-pound 9-point buck only 30 yards from where he had been shot. Cody and family friends, Dagan Fife and Eric Moody loaded the deer on the back of the 4-wheeler and headed back to the camp.

Andy Crawford, Louisiana Sportsman
It's on the home page!
This report has been moved to the top left-hand side of the home page, so go check it out.

kjs123
louisiana sportsman
la sportsman should put this boys face on the next cover of their magizine. good job little man!
Reply