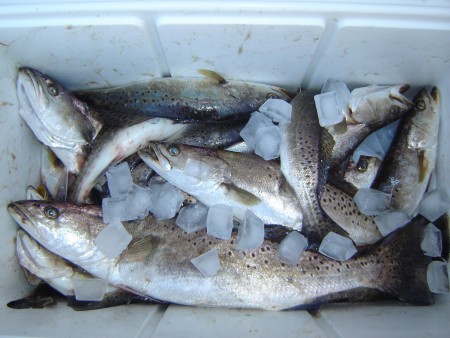 Being married and able to fish 2 days in a row, and those days being Saturday and Sunday,is what I consider to be a great weekend even if I would have come home with last week's skunk both days. OK maybe not as that skunk was a little tough to swallow. Due to last minute approval from the wife I made a solo trip Saturday morning. I launched before daybreak and eased out to a spot I have been having mixed luck in. I started out throwing a mirrolure (Bigbee has me hooked on these)and was able to snag 6 quick ones and miss about 4 more and had 1 throwback. That bite died out so I switched to a purple hybrid on a 3/8 jighead. Well from the third cast to number 25 was about a 2 hour span at the most. As some would say, the bite was plain stupid. I worked the next hour and a half looking for reds but had no luck.

After seeing Saturday's limit Bryce was ready to roll Sunday morning. Neither of us realized how cold it was going to be until we started easing our way out. Man way too cold to try to explain. We started out on the mirrolure again as Bryce was able to pick up one but we never really could find them and that pretty much summed up the morning. One here and one there until we scraped up 11 specks, 2 whites, and 1 flatfish and here we called it a day at 9am.
Reply

packerbacker
Nice
Nice mess of fish John, hope to get out this weekend been way to long!
You sure that wasn't Bryce's catch there? lol
Reply

LSU1AGAIN
Good Luck
It is so hit and miss right now so I would recommend going often (easier said than done right). It changes one day to the next.

I'm trying to get Bryce to shake that black cloud right now. Most of my best trips have been solo trips...he comes along and we struggle, go figure.

BIGBEE
nice haul dude
Those are some logs there man,my priorities have been way out of whack lately,I need to rip some lips
Reply

LSU1AGAIN
Book It B
Keep your schedule open for next week, I'll be calling you in the next couple of days. The pathfinder has been land-locked for too many days nows....it's starting to grow wheels and axles on it.

We have to try to get Peace out again.
Reply