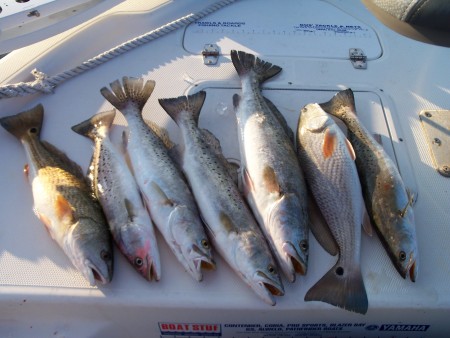 Lake P. hogs starting to show up, heard a rumor they were catching big specks in Eden Isles canals....

Decided to give it a try starting fishing about 1:15pm stopped around 5:00pm.

Good day on the water.

There are fish in the lake and canals and they are nice specks,,, so who said there aren't any specks being caught in the lake is full of bull here is pic.

Century Man
Thanks... they are there... just got to resourseful, use two 5 gallon buckets, one each side, paddle drill holes 10 1" in each bucket. That will help slow the boat down to 2mph or slightly under for a good troll won't lose as many that way
Reply

Gary Fishaholic
That's some nice trout I haven't been trolling in the lake since I was a kid with my Grandfather. I need to give it a try thanks for sharing.
Reply