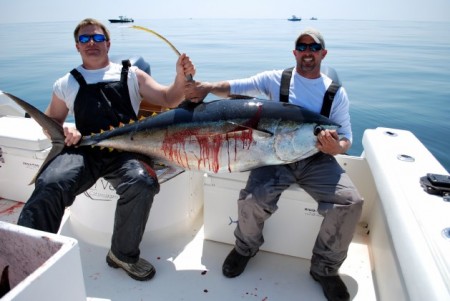 It finally happened. The tuna fishing broke lose and exploded this past week, which is something we have been waiting for since January. Could it be the water temps. are finally warm enough for the fish to feed like they normally do this time of the year, I don't know. One thing I do know for sure is do not try to pattern them this year. The bite was incredible Wed.-Fri. then on Sat. it abruptly stopped at about the same time the wind picked up to about 20 knots and has continued to increase from there. If your not going for it...your probably going to miss out. Guessing which day is going to be the best bite has not been easy to say the least. But, after the fact, this past week was the best so far if you are counting consistent days in a row. Capt. Josh, Capt. Will, and myself fished most days from Wed.-Sat. with all of them being productive except for Sat., but still not a zero. We were averaging 4 Yellow fin Tuna per day, but that was becaue we stopped fishing for them once everyone decided they had enough. There is no telling how many we could have caught. Along with that you can add about an 8 or 9 blackfin tuna avg. which went in the box although most were released. Our big fish on Thurs. was about 130lbs. and our big fish on Friday was between 160-170lbs. on the old guessometer due to the new Marina scale still being in the box upstairs. The pictures will show the size and I will let them do the talking from here. We've got open days. The weather looks great starting about mid-week. Hopefully the tuna bite will stay red hot as we move into hopefully a warm springtime weather pattern.