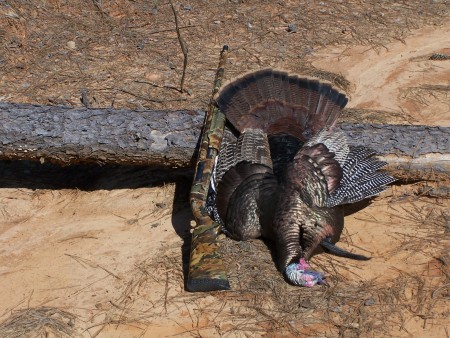 Well, got my 2nd turkey of the season.Had too work for him.
Started out in one area where i seen some turkey sign.Got their about 6am by 7:30 have not heard a sound.So i made a move to small clover field about a mile away.(same clover field i killed my 1st bird.)I got their about 7:45 and some calling,nothing.Everything nice ,still and quite just right then at about 8:00 I heard a gobble a long ways off.So i did some calling he gobbled again but a little closer.I started calling every 10-20 min. and sometimes he would gobble and sometimes he would not.Well 30-40 min. went by and not a sound.Well about 9:00 i was just about ready to give up i said let's give it about 30 min more.(TOO MYSELF)I took out my crow call and gave it a toot.Two turkeys gobbled about 200 yds away.So i yelp and he gobbled for some reason(women) he got all fired up,everytime i called he would gobble.This went on for about 30 min.He got to with in 100 yds but would not come in.Then he started moving away for me,so i cutt to him and he started gobbling again.So i got real aggressive with my calling the more i call the more he would gobble and dbl gobble.Now he's coming closer.Then i gave him the silent treatment let him come look for me.He gobbled again now's he 60 yds and coming up the road to the field.Then everything got quite for about 10 min. so i soft yelp he gobbled and was drumming
right on edge of the field could not see him (20 yds).When he step out into the field he went into full strut then i catch movement guess what another one walks out into the field.Took aim on the first one he was bigger at about 35 yds. BOOM I MISS and he flew away good thing i was a fast pumper (i shoot a pump) i swong on the second bird and shot him before he knew what happend.

Patience and position are the best calls you have.