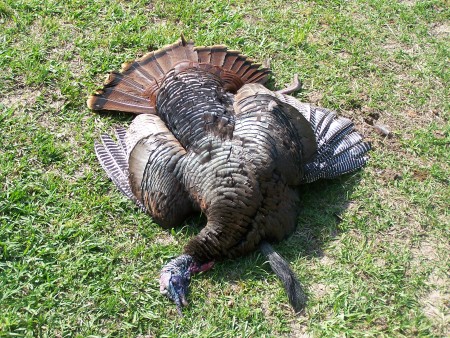 Well went back to Alabama too try to get my 3rd turkey.But ended up with a real good weekend.With killing 2 long beards.
The first was killed at 9:30 after missing one at 7:15.
Well at about 6:15 the turkeys started gobbling.I knew that
their was at least 2 birds gobbling.So I stared calling and like book work he came down the road in and out of strut for about 50yds and when he got at 30 yds I shot,waiting for him to fall,but instead he ran off. Kick myself in the butt,got my stuff together and moved to another spot about a mile away.Did some calling and not a sound.Buy now it's about 8:30 or so.Well at about 9:00
they had some crows messing with a hawk and the hawk squell
and a turkey gobbled about 100 - 200 yds away so I call to him and he gobbled again,yelp to him 3 more times and he gobble every time.So I move to him.Got set up and called again and gobble again so I got aggressive and he kept gobbling and came right in at 30yds BOOM.
11" BEARD 1 1/4" SPURS 18LBS.

MICAH M
Great Weekend
Wow, can't get much better then that!
Reply