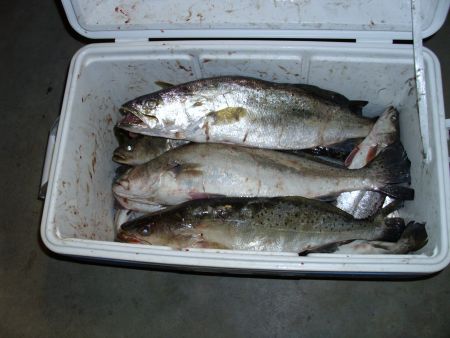 Ever have one of those days when you aint even thinking about fishin ,ME NEITHER.. At work today and talkin to LSU1AGAIN about a new theory on how to catch trout all the time and he mentions he got invited to fish after work. The itch started. Called oneofthepack said my boat or yours after work, Yours he says, lake kinda rough for the bay flat jr., I’m lookin at the flags outside the shop hangin straight down, but Stanley knows, so I get off work fly home hook up the bay craft and head for Dockside bait and tackle. Got the launch paid, the boat in the water ,and off we went. Wanted to talk to Chas for some pointers ,but he was busier than a 3 legged cat with Diarrhea. Passed thru the draw on my favorite 5 mile long reef and headed south, Stanley was correct, lot rougher than I expected ,so just found a spot and started chunkin about 6pm. I had a Dudley something with a straight chartreuse tail on 1/2oz white round head and oneofthepack had the trusty purple beetle on 1/4 oz round white head with the gold hook..I broke the ice with a nice 18“ trout and Stanley followed up with a bigger one(23”) That’s how it went for a Ľ mile of pilins or so. Made a return to where we started to make another drift(didn’t want to crowd a boat already ahead of us). The second drift was not very productive so we called it a day . Water was fairly clean and incoming, didn’t notice the temp. Heard of some good reports from the morning fishers. Finished the afternoon about dark.

17 trout 18-23”
3 throw back trout
2 small flounder (throw back)
1 hard head
1 something , Finally grabbed the spool to save some line(broke off)
Too many bottoms to count.

What a way to end a work day.

packerbacker
TIDEWATER19
Great mess of fish buddy, hope i have as much luck tonight as you and Stanley did. have had the itch for 2 weeks but work has not let me out. hope my box looks close to yours!

troutsman (Jarett M.)
Nice!!
Nice box there Buddy!!!! Think I may have to scratch that itch soon. Especially after last Saturdays conditions!!
Reply

Gary Fishaholic
Nice trout
Way to go Buddy I might be able to get out there this weekend. Or at least I hope so Ill be looking for yawl may be able to give me some pointers. I am a little rusty didn't get to go last weekend.
Reply

LSU1AGAIN
The Call....
Got a call from Chas yesterday at about 5:45 pm saying 'The Purple Beetle Posse just launched the Baycraft' so I knew the trout population was soon to be endangered. I had to make me up a double-rig to try to increase my chances before the beetles started flying. Looks like I was correct....Nice Catch!!!
Reply