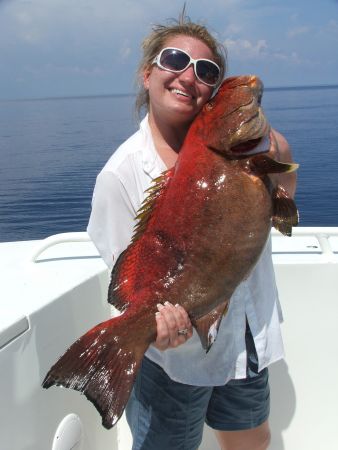 Here is the report for this past week. First up were Richard Wall and gang catching Amberjacks, mangrove snapper, and almaco jacks. We started off with the mangrove snapper and put 20+ in the box before running out to the deep for amberjacks and almacos. It was a great day with great people.

Next were Brannon Devillier and gang. They wanted tuna so we went long looking for them but only found one small yellow fin and one decent black fin. We then came inside a little and found a commercial boat on the spot that I wanted to fish. We fished it any way and Stacy caught a Fire Back grouper soon to be named by the experts trying to ID it. Also coming to the ice was a couple of chic dolphin, amberjacks and some almaco jacks. Richard Studd was in from Jamaica and totally enjoyed his fishing trip. Again I was blessed with great people.

Then came Greg and Andy Congdon. They caught their limit (20) mangroves and 2 amberjacks in record time. They both enjoyed catching the largest they had ever caught. Add in one cobia and they had the time of their lives. I can’t wait for them to come back.

What can I say about Mike Low and his gang but “Man can they fish”. The first stop proved to be a good one with 41 of the 53 mangroves coming in fast and furious. We stopped at that number to go get some AJ’s and these came so fast we still had time to get the rest of the limit for them on the way home. Add in 3 for my supper and we were good for the day.

Dr Jim Heurtin came in on Saturday to fill the freezer and it didn’t take them long to get into the action with the mangroves. We stopped at 28 to go deep for the AJ’s and other fish that wanted an ice nap. Cap the day with 2 wahoo – one caught by Bobby on mono and one by me on a jig with mono - what a surprise. Also on tap were 2 marbled grouper, a yellow fin grouper, almaco jacks and a scamp. That’s a stack of great eating fish.

The last 2 days were spent with Eric Hoffmayer and Jennifer McKinney from the University of Southern Mississippi doing whale shark research and Jeff Corwin who has done work on the Animal Planet, Food Net work and NBC News. Jeff also had Kevin (producer) and Jim (cameraman) with him. There was also Nick from Australia or Borneo or somewhere that has that type of accent and we still don’t know why he was there. We double tagged one shark and missed on another. This can be seen on NBC nightly news this coming Friday. While this was going on I did happen to put Jim on a nice Yellow fin tuna and a 50 pound AJ. While looking for the whale sharks the spotter planes saw a pod of orca whales (killer whales), beaked whales, sperm whales and pilot whales.

All in all it was a great week and I had lot of great people on the boat. For your day on the water call Capt Tommy Pellegrin, 985-851-3304. It’s not too early to book for next year.

Tony Taylor, Louisiana Sportsman
Nice
Cool fire back grouper. Never saw one of those before. Very interesting fish. Glad to hear you are still tearing 'me up. Guess you have gotten to be a TV star! Thanks for working with the La. Sportsman TV crew. Great show!
Reply

Bink869
COOL
Nice grouper, never seen one of those before.
thanks for sharing the info.

yellowmouthkiller
fire grouper
Hey capt. It's Matt. What ever happened with the fire grouper? Did they figure out what is was exactly?
Reply

Capt. Tommy Pellegrin
'REEL LIFE' Fishing
It's a yellow fin grouper in the fire back stage of life.
Reply