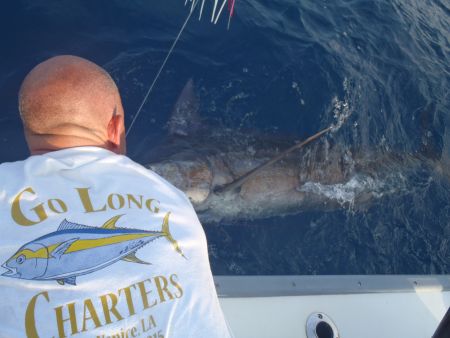 Late report from Sunday/Monday. Had the pleasure of having Todd, Pete, Peter, Mark, Dave & the rest of the gang aboard the Gray Goose for the second time. These guys can fish! They are jigging fools! The target was yellowfin. Well for some reason, the yellows that I was on last week had disappeared but we still managed to have a great trip. We ended the trip with 19 Big Blackfin, 1 small Mahi, a pile of jacks, a 60lb Warsaw and many other odds and ins. Did I mention that we did hook up on 2 Blue Marlin, landing one. The first one blew up right close to the rig and while Bradley and I were frantically getting a bait ready for him, Dave decided to test out his brand new Wombat popper. Perfect cast and fish on! Unbelievably, Dave was able to fight that fish on that light tackle for nearly 30 minutes before it gave us one final air show and decided to part ways. The next morning while pulling baits the drag on the Tiagra began to scream. Fish on! Bradley grabbed the rod, made sure of a solid hook set and handed the rod off to Dave. In less than an hour, we were able to bring the fish up along the boat for some great pictures and a good release that Bradley filmed while underwater. Thanks again guys for an enjoyable trip!

Well, not sure if it was the right decision or not but it looks like we will have another Red Snapper season beginning October 1. The season will be open on Friday, Saturday & Sundays only. What could be better than hammering the big yellow fin and Black fin behind the shrimp boats and then finishing off the day with a limit of delicious red snapper!

Call today to book your trips.