Anyone Catching around Lafitte or Myrtle Grove?

Re: Fish ID in response to a report titled:  Fish ID

Anyone Catching around Lafitte or Myrtle Grove?

Has anyone been fishing Lafitte for specks lately? headed either there or Myrtle Grove on Tuesday and was curious.

Has anyone been to the Bayou Black area recently? I am thinking about heading there tomorrow.

We had 2 people back out of a planned trip on October 2. We will be fishing for Tuna behind the shrimp boats with CajunOdysea. Cost is $350 a person. We are thinking about getting a cabin at the marine for the 1st which would add about $50.

Went fishing yesterday and today out of belle pass. Of course, had no problems with red snapper. We caught a few mangroves but had trouble finding them. We found on area that had about 6 rigs in some cleaner water that was holding fish but as soon as we started pulling snapper out the sharks showed up at every rig. We thought about heading further west but have never fished that way.

How is the water that way? We are headed back next Friday. 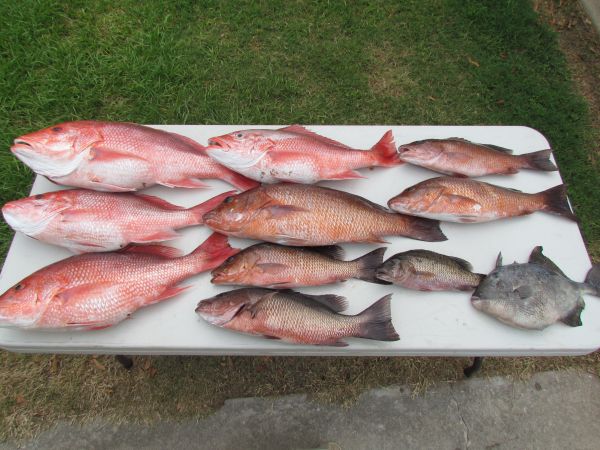 Yesterday was the day to go. We ran to the ST-86 block and started fishing. First 4 drops, we had 4 red snapper, smalled at 8 lbs, first fish was 12 lbs. Next to mangraves. We caught a few then a cobia hit the line. Got it to the boat only to loose it at the net. Caught 6 mangroves till a supply boat came in and churned up the water.

Moves to the next rig. We start chumming and another boat comes and ties up to the same pole that we are tied to. After I told them something, they moved to the other side, but still 20' from us.

Needless to say the mangroves stopped bitting at this rig because these idiots did not know how to fish.

By this time, the tide has switched and was pushing dirty water in. We did not see a mangrove the rest of the day. Finished off with one triggerfish. We could not keep the small snapper away from our baits.

Anyone headed out tomorrow? My wife and I are planning to take advantage of the good weather. We are planning to head in the direction of ST-86. Anyone reports from the area?

Is anyone looking for an extra person to split cost this weekend? I have gear but my boat is out of service n

Is anyone looking for a person to fill a trip this month. I am experianced with offshore and have some gear. I am off most weekend days and some week days.

December 29, 2010 at 6:58pm
Anyone looking for an extra person for offshore this weekend

Is anyone looking for an extra person to split cost this weekend? My boat is in the shop and I doubt it will be ready. I am experienced and have my own gear. I can also provide bait. It does not matter the target I am just wanting to get offshore.

Does anyonE have the phone number to the boat storage sheds in Golden Meadows. It is the one on the 4-lane highway.

I am trying to get some advice on a good reel for fishing for mangroves. I don't go but a few times a year so I am looking for something with a decent price.

Hey guys, I am looking for a replacement cowling for a 1998 yamaha 225. Anyone have any ideas. I tried a few local shops and the boat yard but no luck.

Hey guys, I am thinking about going frogging this weekend. I do not know of any good areas. I live in Gonzales, but willing to drive a little ways. Any advice would be great..

Hey guys. I have an uncle who just got back from Iraq, his second tour there. He has been home for about a week and wants to go fishing next weekend. I was planning to go to the Grand Isle Area. Does anyone have any good ideas on where to go. I have a boat that is able to fish the near shore rigs and the bays and marsh. I am very familiar with the area, just not this time of year. I have some ideas, but we just want him to have a good time.

Thanks for any help

Is anyone catching any crawfish yet. Thinking about going tomorrow but wass wondering.

Has anyone ever got crawfish traps from louisiana net and twine. I am wondering if they are any good? I am thinking about going this week but would like to get some ideas before I head that way.

Does anyone know of a place near gonzales that sells rabbit meat. I am looking for some.

Hey guys, I am looking for some help on a subject. I have seen some crawfisherman in the past with some kind of window screen on their outboards. I know it is to keep grass out of the water pickups. Does anyone know what they use and how they do it? I have been running through a lot of grass lately and get tired of having to cleen out my pick up screens.

Hey guys, I am looking for some used handheld gps units. I am going to be using the units to teach scouts how to use a gps. Brand does not matter, as long as they work.

If you have any please let me know.

I thought this was interesting

It looks like a highfin Goby. I have identified many of them

look up highfin goby and violet goby. A lizard fish is darker in color and has a triangular head

Grand Bayou no longer goes to the gulf. The best route is to head south via the Empire Waterway. It is well marked, just stay between the poles.

We're y'all the blue boat drifting out there on Saturday? If so my crew was wondering how y'all ended up doing.

be careful. he was just cited for not having a charter license or insurance. article on home page.

There is also a parasite that affects young male blue crabs. This parasite will round off the apron and give them a sponge feature.

This law applies to reef fish only

gag, and they are closed

Click Layers them Gulfward Boundary. What I did was use the mouse to trace the line while writing the coordinates down that were displayed. Then added them to my chartplotter as a track.

I took the wife and 5 year old daughter to Brussels and Bayou Rigolettes today. Came home with 4 trout and the daughter had a blast

Have you looked at the Desoto National Forest. They have a canoeing creek and a 35 mile hiking trail. There are many dirt roads you can drive down also and fins somewhere secluded. They also have a hand full of 'improved' campsites. By these I mean just a central bathroom and water faucet. I take my scout group to the area sometimes.

December 09, 2014 at 11:25am
A comment titled: Reports in response to a report titled: Please explain this one to me

Some of the reports have maps also. It looks like that may be a continuation from a few years ago.

April 24, 2014 at 8:53pm
A comment titled: Projects in response to a report titled: Please explain this one to me

Check out this website. Just select Jefferson parish and see the restoration projects that are going on. http://lacoast.gov/new/Projects/List.aspx

April 24, 2014 at 8:26pm
A comment titled: wndshield in response to a report titled: Plexiglass boat windshield for console

I would like to know about the place in gonzales also.

October 10, 2012 at 8:01am
A comment titled: trout in response to a report titled: Information please

Trout are headed this way also. Only the fisherman who were fishing for trout at the time of the ban were given permits. These permits cannot be sold or transfered. They are tightly restricted times and dates they can be used. When these fishermen retire or die, there will be no more commercial fishing.

There is an abandoned oil platform in Bayou Dupont that has been leaking since Sunday. It was temp pluged today

September 15, 2011 at 8:29pm
A comment titled: Bayou Metal Works in response to a report titled: Welding

I took part in the tagging and releasing of the fish for the Geaux Fish tournement. It was only trout that were released. There were 10 released in the baritaria basin. All of these tags are green and about 3 inches long. LDWF does catpture and release tagged fish also.

chbaker has not filled this section yet.