BBD in response to a report titled:  slickhead #2 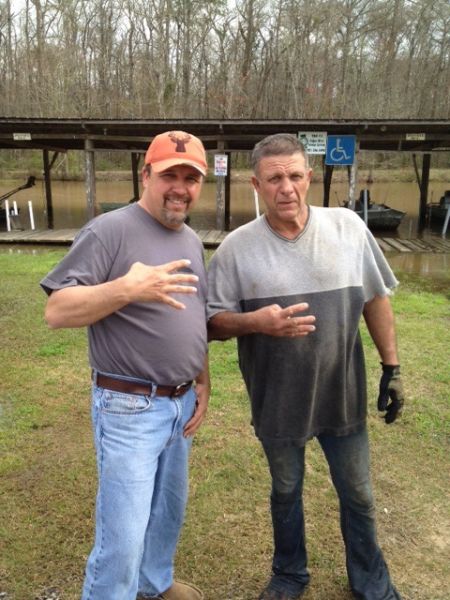 Just got finished talking to Shelby The Swamp Man Stanga.... He will be at our Southern Boyz Outdoors booth at the Louisiana Sportsmen Show in Gonzales La.. March 10,, He will have his gun with him ((( No Bullets))) ... Stop by

AX MEN SHELBY SWAMP MAN STANGA will be in the SOUTHERN BOYZ OUTDOORS booth with Kinion Bankston an crew, at The Louisiana Sportsmen Show in Gonzales La as of now he will be there with us Saturday 10 & Sunday 11... TY we hope to see ya there...

Take a kid fishing tournament. held this weekend / Saturday 28 at north pass landing. 1/3 of all proseeds go to A childs wish foundation for louisiana children. Door prizes, hamburgers, hotdogs and drinks. every kid will receive a trophy. We (Southern Boyz Outdoors) an channel 17 will be there an some of the cast from swamp people also. hope to see ya there... more info call Terry Knight 985 320-5644

I did a broadhead test myself. The rage defflected bad. The swhacker didn't deflect at all. The rage jumped in to the spot light with all the hype an the super stars of hunting. made them #1 if you ever heard to be the best you have to bet the best... Go to you tube search broadhead test or rage broadheads u will see my test Rage vs Swhacker.. it all in real time..

It would have been hard for me to let my wife shoot that buck,,, lol GREAT BUCK...

Nice pic's someone made a real good shot on the doe. good job.. We all need to take more does.

October 13, 2010 at 8:00am
A comment titled: Broadheads in response to a report titled: Arrows and Broadheads

The rage has allot of hype behind them. but they open in flight and deflect bad. I shot them for two yrs killed 4 deer with them. if you shoot the rage you better have a good broadside shot. check out my product test on you tube. go to you tube search broadhead test or swhacker. I made the switch to Swhacker no deflection Plus they are made right here in Louisiana. The rage comes from Chicago r somewhere up that way..

October 13, 2010 at 7:38am
A comment titled: Southern Boyz Outdoors in response to a report titled: Question about Calling

one thing ,,, if you aint grunting you aint hunting. if it wasn't for my grunt last yr in Missouri i wouldn't taken that nice 8. He was about 100 yrds from me i grunted 1 time right at him he stop looked my way. i grunted he came running with his hair standing up on his back.Swhack'em Stack'em.. when they're rut''n you need to be grunt''n ..

September 19, 2010 at 8:55pm
A comment titled: SOUTHERN BOYZ OUTDOORS in response to a report titled: Is it October 1st yet?

Try the Swhacker broadheads they're made right here in Louisiana plus they r made for high speed bows...

September 19, 2010 at 5:19pm
A comment titled: SOUTHERN BOYZ OUTDOORS in response to a report titled: Lock on

BY FAR THE BEST LOC-ON YOU CAN BUY...

September 19, 2010 at 5:16pm
A comment titled: SOUTHERN BOYZ OUTDOORS in response to a report titled: whatcha think he will score

That is 2 nice BUCKS good luck.

September 19, 2010 at 5:11pm
A comment titled: SWHACKER in response to a report titled: Arrows and Broadheads

SWHACKER r made for the high speed bows. Plus they're made right here in Louisiana.

Checkout the SWHACKER they're made right here in Louisiana. 2 1/8' cut. you can shot it on a angel/ (Rage you can't) Plus rage r made in Wisconsin / yakee broadhead. lol
SWHACK'EM with the SWHACKER

Southern Boyz Outdoors has not filled this section yet.