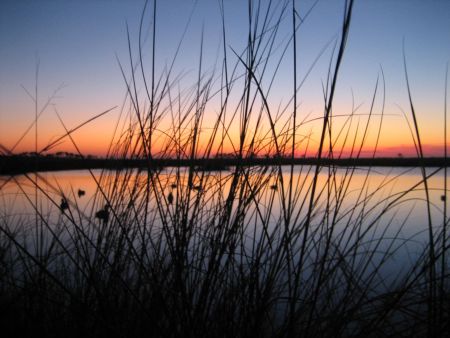 User Name
bayoubob
Member Since
May 13, 2006 at 8:58am
Age
57
Location
Slidell, LA
Hunts For
Ducks, geese if they are around
Fishes For
Speckled trout, redfish
Organizations
Ducks Unlimited, Delta Waterfowl 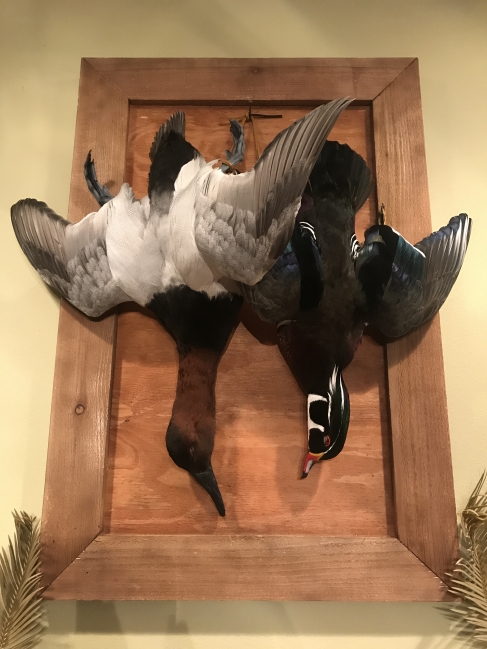 Beautiful mount picked up yesterday! Taxidermy by Kevin Hynes. Unreal colors, picture does not do it justice. 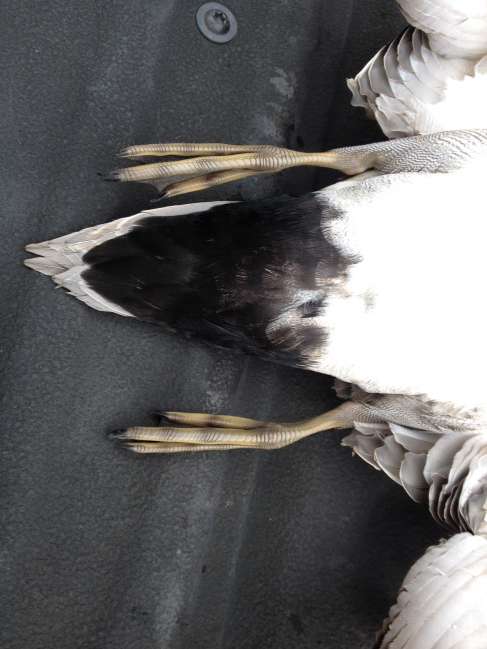 Had best hunt of year this morning. 5 drake greys and 1 young drake duck that has characteristics of both wigeon and gadwall. Looks to be pretty young and not all colored out (too bad). Has blue bill with black stripe down middle and bill a little longer than regular wigeon bill. Feet are dull gold color more like a gadwall, not bluish grey of a wigeon. Head has faint green patch, but no white crown at all, actually crown is brown. Wings have a little more black than a regular wigeon, and has small area of green in speculum. Pictures attached. Opinions? 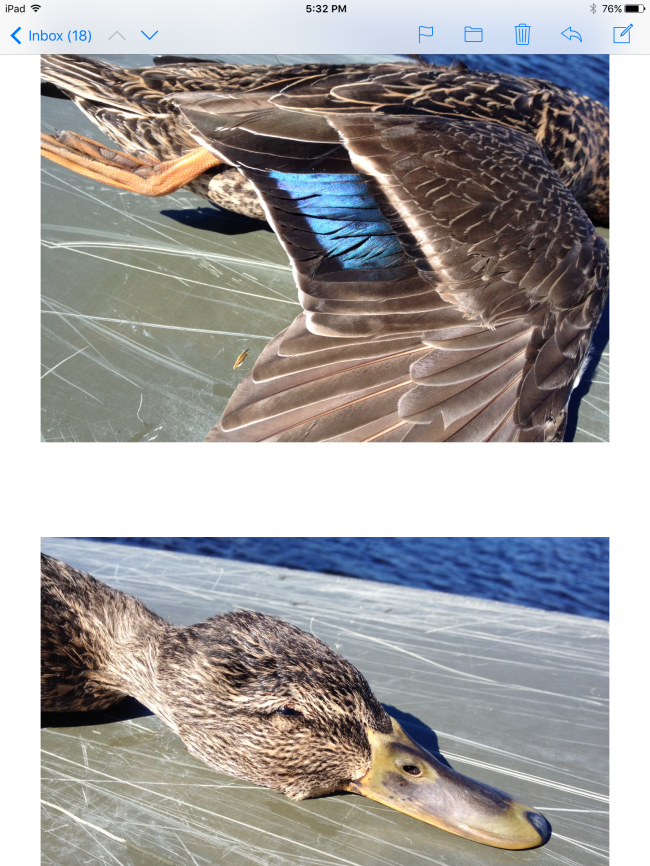 Opinions...this hen was taken today. Came in with a big greenhead (both stayed)! Strongly resembles a hen mallard except for:

Bill has more of an olive color, not the orange of a true hen mallard

Thinking a mallard/mottled hybrid or a Mexican Duck? Opinions? 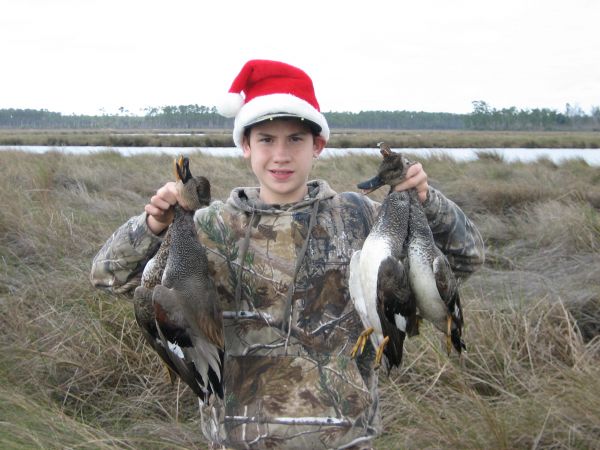 Hey, who's making the toys for all the good girls and boys??? Not this guy, he's out huntin!!! 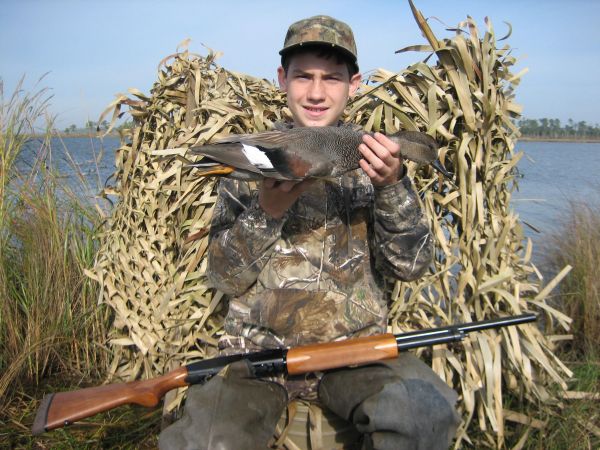 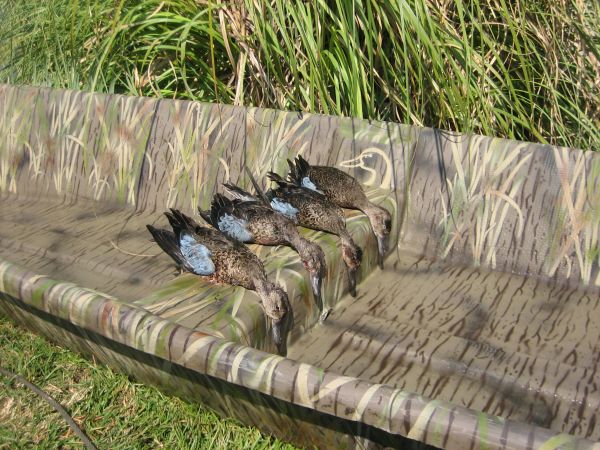 What luck...4 teal knocked down with 1 shot...probably will never happen again!

Also repainted the 'ole pirogue as a project to help satisfy the itch before duck season!

Looking for any suggestions on reputable, reasonably priced duck hunting guide services within 2-3 hours of Slidell. Would like to make a hunt before the end of the season and bag something other than just greys and teal. If specific names, locations and prices could be shared it would be much appreciated. Thanks! 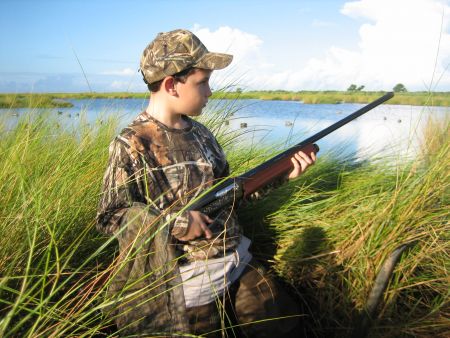 Took my step-son for his first duck hunt this morning...no teal...but he had fun nonetheless. I told him that a bad day hunting is better than a good day at school (or work)...he agreed! 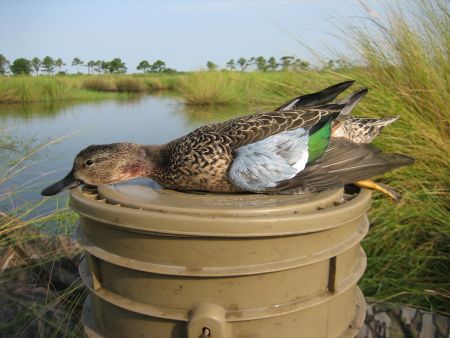 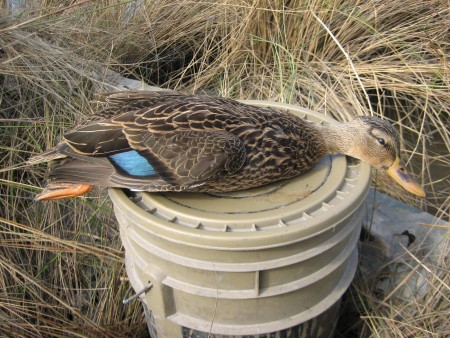 Nothing but mottled ducks flying today. Too bad they reduced the limit to 1. Could have easily got 7-8 this morning, as they were decoying like they do during teal season. Where's all the other ducks??? Horrible season so far. 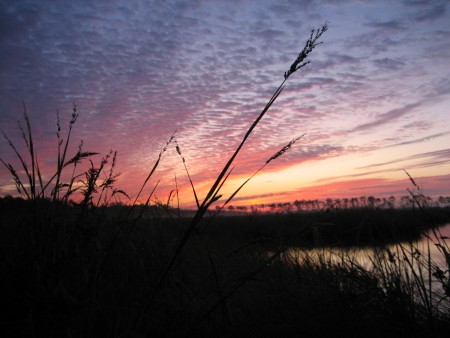 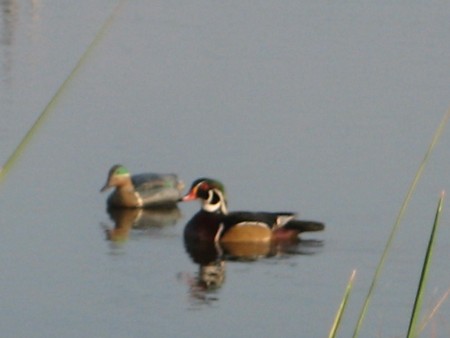 Saturday...The only duck that came in today could only be shot by the camera. He swam around my decoys for over 20 minutes! Maybe in November??? No teal in sight today...just mottled ducks and this woodie. 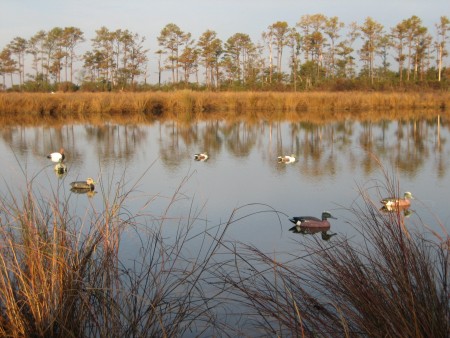 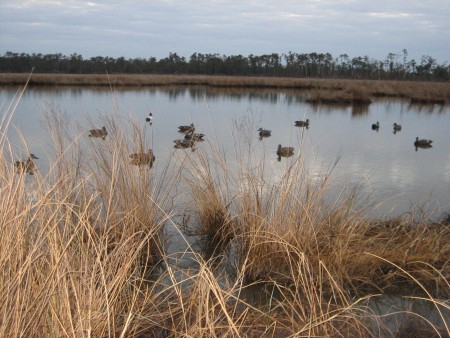 Bagged 5 in a 5 minute period early on Sunday. After that, nothing. Pretty much the only thing I saw was a few mottled ducks. Could have shot a few more of them, but I was already at the limit of 3. Ended up with 3 mottled ducks and 2 ringnecks. 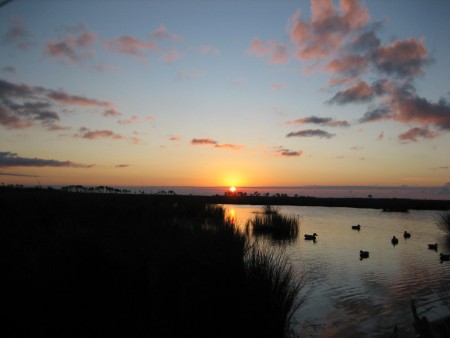 No ducks today, but nice scenery. Maybe next time!

The duck in question is an old hen mallard that has stopped producing female hormones, which causes them to display some male plumage. The key is the bill...hens that go through this will ALWAYS keep the orange/black bill. If it was a drake, the bill would be the typical yellow/green color.

Hello there, GB3 and Mandevillian! The Chef Pass area is where I hunted for my first 30 years from 1975 to 2005. My Dad and his friends also hunted there for many years before I started hunting. The actual ponds we hunted have been filled in during a recent marsh reclamation project, but the memories will always be there. My Dad's proudest moment out there was when he and I shot 5 drake mallards on one hunt, way back when there were not a lot of greenheads around. His face lit up when he showed off our 5 trophies to his friends when the hunt was over. We had good years out there, a few bad years, but most of all we had a good time out there! Memories galore!

Taxidermy by Kevin Hynes in Pearl River, LA. He is a former world champion, check out his website. He actually has a picture of a pintail and widgeon dead mount in his customer gallery that you may be interested in.

Proud Pop, here is the drake taken in Texas back in December that Mandevillian was referring to. Got the hen on day 1 and the drake on day 2. Do not have picture of the hen, but will try to post one of the pair when I get them back from the taxidermist.

Just my own personal observation thus far this year. Have harvested 12 ducks so far, 7 different species, but the glaring number is just 2 grey ducks. That's just shy of 17%, folks. When hunting was better, greys made up about 70% of the ducks taken. I know there are pockets of greys in places, but in general my personal opinion is that many of the greys likely have shifted westward from the Mississippi Flyway to the Central Flyway. Until the greys return in substantial numbers it's going to be slim pickings and plenty of MT skies!

I can remember as a kid during the winter crossing the Twin Spans and there were tens of thousands of divers between the Twin Spans and the Highway 11 bridge. Massive rafts. In fact, a long time ago they used to have a 10 day special Scaup season at the end of the regular duck season on numerous open lakes in Louisiana. Ain't dere no mo!

Nice mount, Proud Pop. Unfortunately mine has less coloration than yours and is likely even younger, otherwise he would have gone to the taxidermist too! In nearly 40 years of hunting this was my first hybrid...hopefully if there is another it will be more 'wall-worthy'. Also still looking for my first banded duck...hopefully I'll get one before too long!

Here's 3 more pics of Mandevillian's Black Duck. Definitely not a Mottled Duck, and very large size, just as large as a Mallard drake.

I forwarded the photos to a top-notch taxidermist and his opinion is that this duck is a juvenile drake Wigeon/Gadwall hybrid.

Ricky, yours appears to be a Mottled Duck drake.

Fairly certain that you can get 'duplicate' licenses on the LDWF website, www.wlf.louisiana.gov for $2 each.

Also, maybe call Academy to see if they do 'duplicates'.

As far as the Federal duck stamp, you're probably on the hook for another $25.

September 29, 2015 at 8:25pm
A comment titled: Missing Leg in response to a report titled: Circle swimmer?

I've seen this 2-3 times on mottled ducks over the years...old healed over scars from losing a leg, probably to underwater predators.

Google 'purple headed gadwall', pics of others like yours. Beautiful bird...a true wallhanger!

Freeze 'em and use for bait...how many people can say they had shrimp that were eaten by 2 two separate fish!!! Da ultimate in recycling!!!

Looks like a juvenile blue goose, but the goose experts can verify for certain.

Thanks for the opportunity to enter the drawing!

March 13, 2014 at 2:30pm
A comment titled: Perfect Day...Very Few Ducks in response to a report titled: Please tell me about post-season Youth hunts

Took my step-son to my regular East zone public area. Beautiful day, perfect conditions, perfect wind, only one thing missing...the ducks. Saw 3 big ducks all day and a few bands of teal. This has definitely been 'The Year Without A Real Migration'! If this last blast of Arctic air, snow and frigid temperatures did not push some ducks in, I'm stumped.