cool in response to a report titled:  Family Tradition 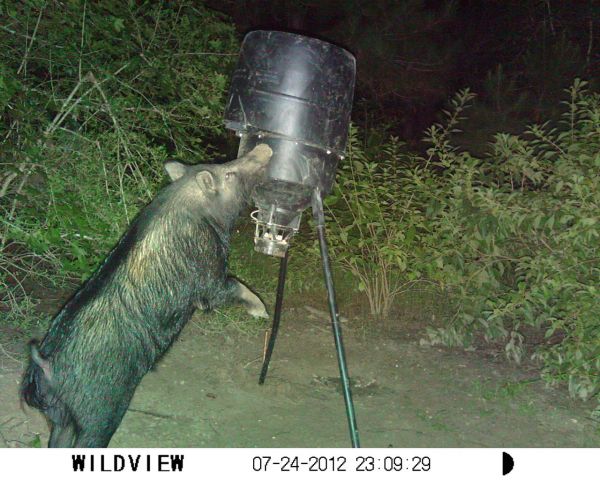 These things are horrible and have scared the deer away! May have a chance to get them this weekend! 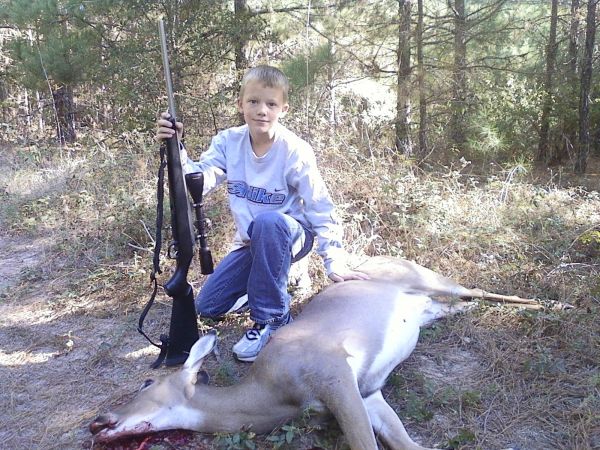 My son Landon layed the smack down on this doe for the area 2 youth hunt Saturday morning. We planned on hunting till 10am, weather was 82 degrees with southeast winds blowing 10-15mph. This doe walked out at 9:50am, quartered slightly toward us, he aimed high shoulder and she dropped in her tracks!! Wow, his face!!! What an experience!! Bullet entered high shoulder, demolished the lungs and must of glanced a bone because the spine was severed! He was shooting a 7mm-08 with Hornady SST bullets. After cleaning, we headed to Many to see Troy Landry from Swamp People, then drove back to the camp for some bass action. We had to use the canoe and get out and push a couple of times because of the low water conditions. He caught 2 and I got one. WHAT AN AWESOME WEEKEND!! 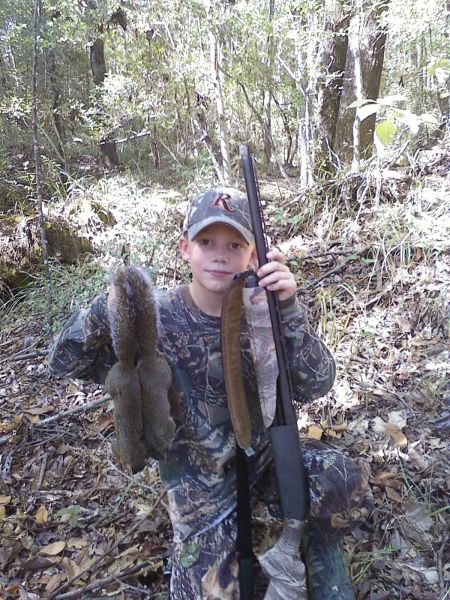 My 8yr old manged to get 2 sat and 1 sunday morning. Saturday was calm and cool, sunday, humid and windy, with mosquitos. Anyway, great to be out there!! 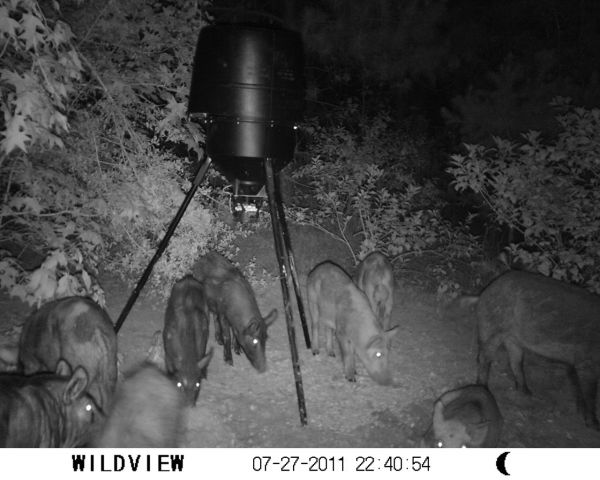 In my 3rd year on a lease in Sabine Parish, first two years great, no hogs!! This year, got only one deer on cam and after this weekend, saw what has happened!!! Hogs Everywhere!!! 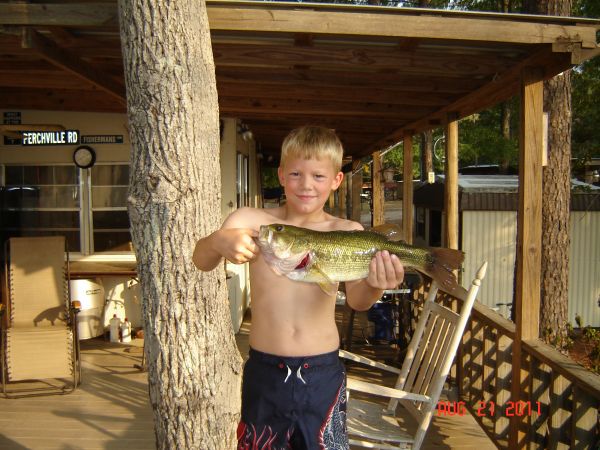 My 8yr old decided to walk da banks of the very low Toledo Bend lake Sunday morning while I did chores. He managed a 2 1/2 lb bass on a top water bait, he was stoked!! Ran back to the camp to show us, dropped it a couple times, full of dirt, and said his thumb was all ate up from carrying it!! He tried saturday evening with no luck, but was persistent and got back at it sunday morn!! 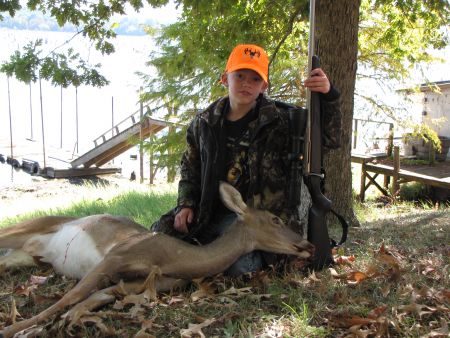 What a weekend this past weekend was! I'll start off with the youth hunt which was discouraging. We sat a total of 11 hours sat and 5 hours sunday without seeing any movement. A little bummed but ok, that's hunting. This past weekend we set up and a big doe comes out at 8:40 and between the putting ear muffs on and pointing the rifle out the stand window, the doe stands broad side at 50yds and is staring us down!!! He shoots and the deer buckled, but it looked a little different from a good hit. Landon is shaking uncontrollably after the shot! Asked if he made a good shot and he says yea!! Says he was nervous, cause he actually never saw a deer that close and didnt know they were that big! Go look at where he shot and I see that it was a stomach shot, but bits of blood mixed in with the food. I decide not to look immediately, so we waited for 3 hours before looking, it was low 30's that morning so it was cool enough. We started scanning the woods and about 40yds there she was layed up. I saw her first but he had no idea I had, so I told him to go look in that direction and I was gonna look here, when he walked up on it, 'DAD, I FOUND IT!!! That was amazing to see him so excited!! The bullet actually entered the stomach but exited behind the front shoulder, so the deer was quarting a little. The season started off pretty good being he killed his first squirrel for the youth hunt at West Bay Wma with my dad's old crack barrel .410. The pressure has been lifted for me, what an experience to share with my 7yr old on his first deer and squirrel!! 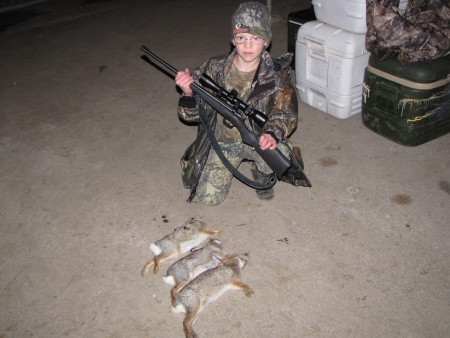 Got invited to a south texas hunt and jumped on it. My 7yr old got to shoot these rabbits at night with the spot-light and his Cricket .22LR. Coon-ass's with a spot-light and legal!!! Does it get any better.......!!!! Thanks Kevin!!!

Anyone bought this lately for their kids? It seems like a cool concept with the interchangeable barrels.(20-ga.22 LR. 7mm '08 barrels) I'm actually looking for a starter shotgun for my 7 yr old, but may consider this package. I'm not sure about the Rossi brand, and for $250 it seems like a good deal. 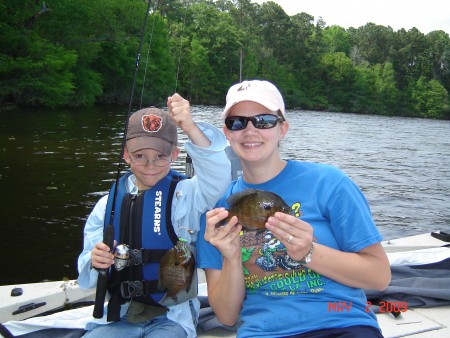 Had another great weekend!! Caught about 150, kept 112 bream, 1 sac-a-lait, and 5 catfish. Weather was horrible sunday, didn't get to fish. Take your kids fishing, my two and nephew had a BLAST!!!! Oh yeah, mom and dad had fun too!!!! 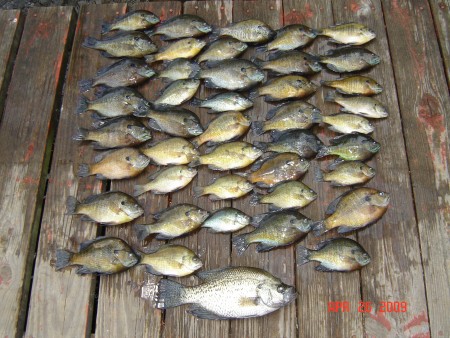 Made a trip with just me and my six year old to the camp. Arived at about 5pm sat and caught 21 keepers before dark. Fished sun morn and caught another 21. In all, about 60 total, 42 keepers, 1 sac-a-lait. Had 5 bream that weighed 1/2lb, each. The sac-a-lait weighed 1 lb. Mostly on crickets, some worms and 2 on beetle-spins. Fun!!! WIND was horrible! Gonna try again next weekend. GOOD LUCK!! 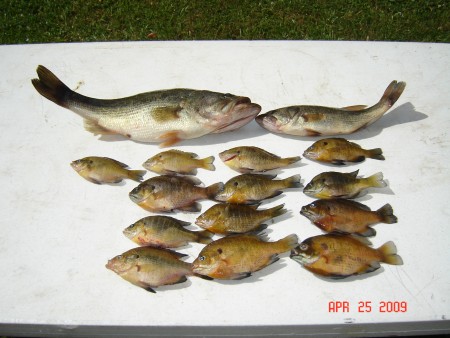 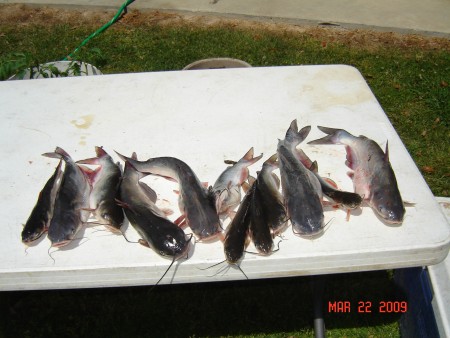 Caught about 15 cats today on worms, south of Gueydan in the canals. Fun to be out there, until the wind picked up! 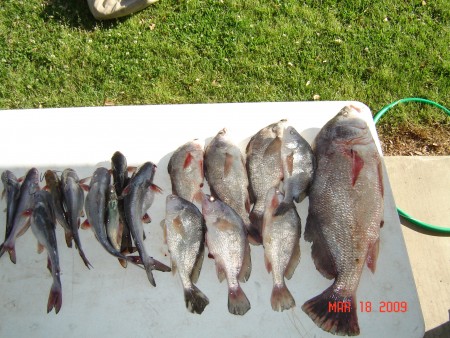 Made a trip Wed. to Little Praire. Caught about 10 of each, the big goo weighed 10 1/2 lb. That was the biggest fish I've ever caught on a Zebco 33, it was a fight!!! Caught mostly on worms, nice day to be out, fishin, sunny weather and cold brew!! 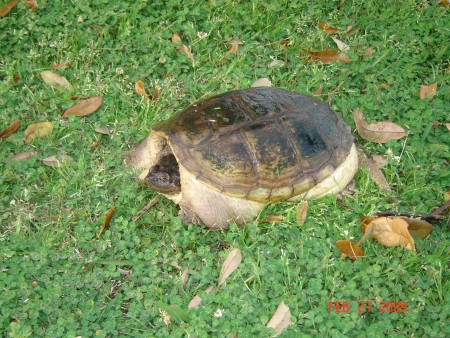 I'm looking for a grab rail for my CC 1860 xpress boat. The guy in Crowley told me $195 for it. I think that's a little steep. I can't find any links on the web to purchase one. I'm in the Lafayette area if ya'll know of any place.

Anyone have suggestions or tips on catching catfish in Indian Creek near Woodworth, La? Is that a popular fish there? Will be going camping this week. THANKS! 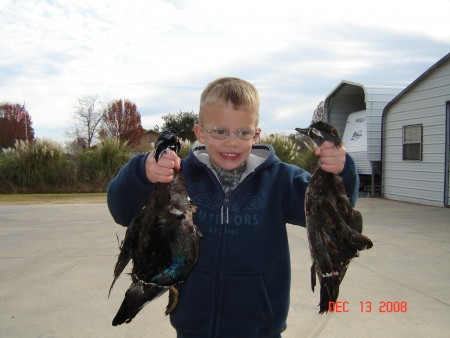 Had time off lately. Got a couple of wood ducks in Sherburne WMA with my son. Caught a couple of cats with the nephews and son on Toledo Bend. Screwed up weather, but fun to be out there!!

Recently acquired a 14ft alum boat with a Johnson 25(1981-82)model. The motor will not idle. The initial start up, I use the choke and runs fine full throttle and will get up to 26 mph. When I slow down, twisting back to idle, it dies. I have to twist full trottle in order to start it again. It was doing this before the guy put it up for over a year. Any suggestions? I can change oil, sparkplugs, general mechanical stuff, seems to be an adustment on the carberator... THANKS!

Had the day off, so decided to check out Sherburne WMA for the next either sex hunt. Hadn't been there since last year. Man, there's some trees down, plenty of cover for the deer to hide. Jumped a rabbit walking in. About 8:30 had a turkey come off of roost, saw it's beard, a young one. About 1/2 hour later came across another turkey, almost stepped on it, looked to be wounded, it would fly about 10-15 feet then start walking. Saw numerous amounts of wood ducks!! Found one pile of deer droppings, and few tracks. I normally jump one or two deer while scouting, but today, nothing. Still pretty cool to see the other animals and be out in the woods. 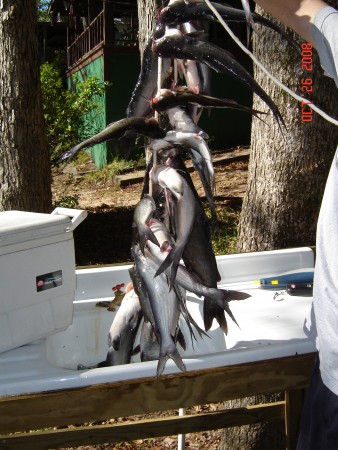 Made a trip with the wife and kids, caught 24 catfish and two goo. Biggest cat about 2 1/2lb, total of 17lbs. Used chicken hearts and worms. Beautiful weekend to be outside, hunting or fishing!!!

October 28, 2008 at 6:56pm
A comment titled: cool in response to a report titled: Family Tradition

December 13, 2013 at 7:46pm
A comment titled: awesome! in response to a report titled: Perfect Timing

December 06, 2013 at 4:24pm
A comment titled: AWESOME! in response to a report titled: Patience is a Virtue

I have been in a lease up there for 4 years now, first 3 years, deer were there, now all I've got is hogs.

My son is 9 and weighs about 70lb, I checked out all those guns too, I went with the Remington 870 youth model 20guage pump with 21in barrel. He handles it well, we recently went dove hunting, he shot 3 boxes, no complaints!! Think i paid like $350 and its camo too. It also has the LOP system (lenght of pull), you can ad spacers in the stock as he grows a little. Click on some of my reports, there's a picture of it

January 06, 2012 at 12:23pm
A comment titled: Awesome in response to a report titled: My First Bow Kill Sherburne WMA

Nice deer for that reserve. Was he chasing?

Nice deer!! Was he chasing? got a lease up in sabine parish, maybe up there next weekend

Got right at 50,000 miles out of my last set of buckshots, I'm on another set now, just rotate them every 5 to 6 thousand miles to get good life out of them.

MARSHALLD has not filled this section yet.