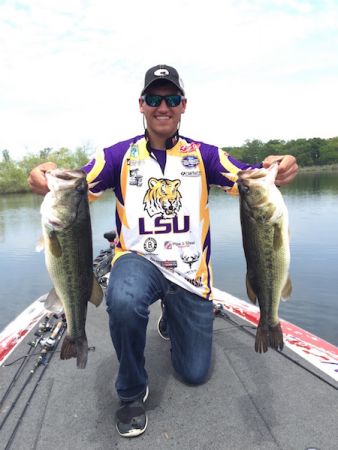 Hey guys, I've heard some talk of Cataouatche making a little comeback and I'm going to go Thursday and give it a shot. I'm just wondering if there's anything I need to be aware of, like shallow water or anything that's silted in that may not be on Navionics. Also, I don't want any 'secret spots' or anything, but if someone could help me eliminate some water that would be great. I'm really just wondering if the north, south, east, or west side of the lake is good. Thanks!

Anybody been catching any good fish up that way? If so, what on and have they spawned out yet? Also, on the Belle River Public Landing side of the Spillway, anybody caught anything around Pigeon or Grand Lake? Thanks guys, any help would be appreciated, trying to get a good day of fishing together.

Thanks! I've learned a lot over the last year fishing for LSU and I'm going to try to be more active here, maybe I can help shorten the learning curve for someone with some of my experience!

Spinning setups can be a really useful tool, but a little bit of prep work goes a long way! For finesse fishing, I spool up a 2500-3000 size Shimano Stradic with 15lb braid (high vis yellow to see my line moving) and attach a fluorocarbon leader that is anywhere from 2-6' long. Any longer and the leader knot will sit on you spool and can mess up your casting. Braid is great because it eliminates line twist, and if you aren't fishing clear water, you can just use straight braid. Spinning outfits excel at casting lightweight rigs like wacky rigs or allowing you to skip light jigs under docks without backlashing. My all-around spinning outfit is a 7' medium action G Loomis with a fast tip, it will cover just about any technique in a pinch. If I'm fishing deep, clear water, like dropshotting for smallmouth or largemouth on the TN River Chain, they I go to a 6'10' Mag Light setup, with 12lb braid to an 8lb fluorocarbon leader. This light rod allows me to really work a fish by adjusting my drag and keeps me from bending out my tiny #2 Owner Mosquito hook. The other great thing about a light rod is it stays bent the whole time you are fighting a fish, so you almost never lose one! But if you're just fishing in South LA, I would say a 2500-3500 sized reel with 15-20lb braid (and a leader if in clear water) on a medium or medium heavy rod would be a great setup. You can do quite a lot with it, and it REALLY shines when throwing weightless Senkos, Flukes, or Trick Worms, and skipping jigs under branches or docks is a BREEZE! If you set one up right, you can have a ton of success with a good spinning setup!

I'm currently the president of the LSU Fishing Club and travel all over the U.S. fishing three tours at the collegiate level, and I also fish the Bassmaster Opens as a co-angler!