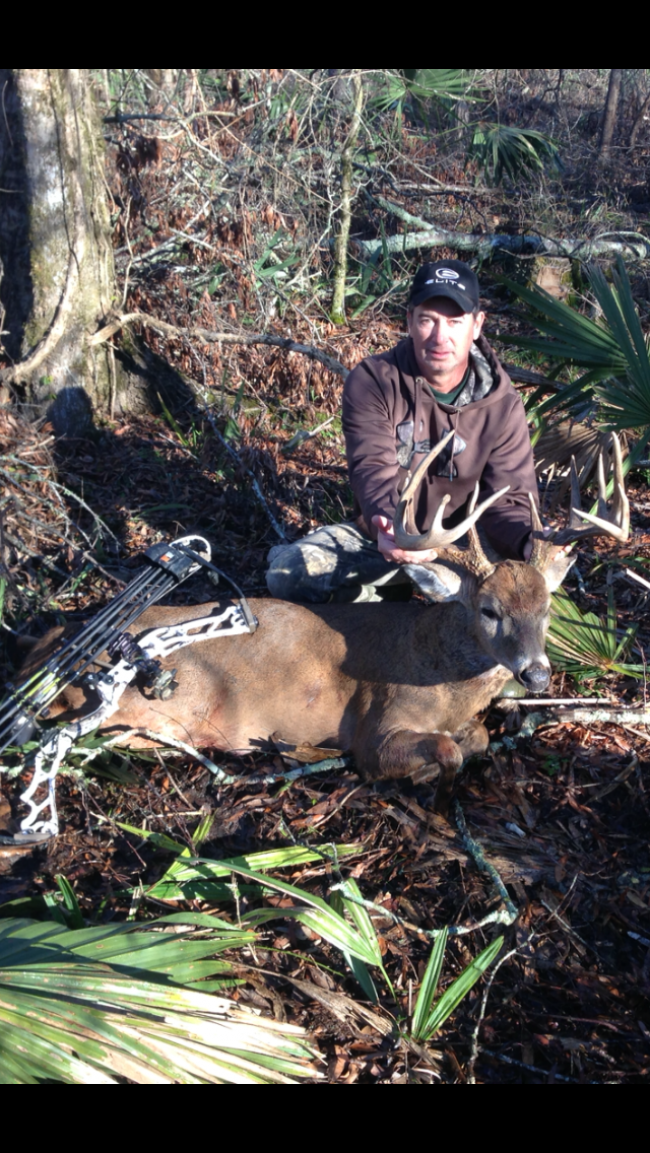 On evening of January 12 I was hunting with a friend on his property. At about 4:30 I caught sight of a deer working his way I front of me from my right to left. As he's walking I'm only catching glimpses of his as he works his way through the woods, in and around tree tops. I can see it's a buck but can't see enough to tell how good of deer he is. As he works his way out in an opening about 100 yds from me and I get a really good look at him I can tell he's definitely a shooter.
As he's casually feeding I get my grunt out and hit it twice to get his attention and it worked. He looked my way but only to put his head down and return to feeding. Shortly after he looks my way, grunts a couple times and starts walking my way. Oh my now I'm about to have a meltdown. As he's walking in taking his time, he stops a couple time to scent check the wind.
As he closes the distance I slowly draw my bow. When he gets to 25 yards, nearly down wind of me, he acts as though he's about to stop and I get ready to shoot but he doesn't. He takes a step as I shoot. Seeing my arrow hit him farther back than I like but maybe still getting liver.
He bolts and runs about 80 yds and stops and goes outa sight behind a tree, I'm thinking he's down. About 15 minutes later I hear him moving so I turn to see him standing, moving ever so slow into another treetop.
I sit there about 30 minutes longer and he doesn't move so I climb down before dark and exit the area so I don't disturb anything. That was a LONG night.
Next morning we gather up and go in for recovery. Fortunately we find him laying where I left him.
Following the golden rule of 'when in doubt- back out' paid off big time for me.

I live in cenral la.