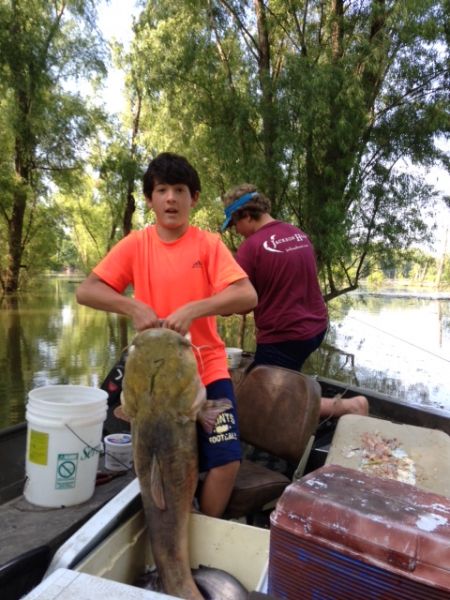 Pulled into the Ms sat morning to find this 105 qt yeti floating down. Then ran our lines and got this big flathead off plus 44 more cats! Great morning 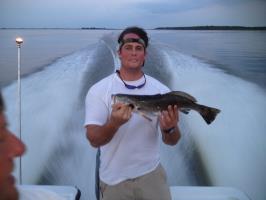 As usual the hospitality at Sweetwater was off the charts! Capt. Jack will do everything in his power to make sure you have a great trip. We had a charter with him this morning but weather made us decide to reschedule. Friday eve we fished out of a friends boat out in Breton sound and put 28 15-20' trout in the boat before we ran out of shrimp. Saturday morning we hit a different rig and put 29 good ones in the boat again before the shrimp ran out. Water is dirty due to Ms river in black bay but the trout are still there. We caught a few on lemon matrix but they really wanted shrimp.We also caught a few reds, some huge black drum and sheephead.

Does anyone know if either of the marinas are open since Issac? Thanks

I talked with the owner yesterday and he said he was still a few weeks from opening. A very kind gentleman and had time to talk to me even though his place was destroyed and his boys were rebuilding it as we spoke! 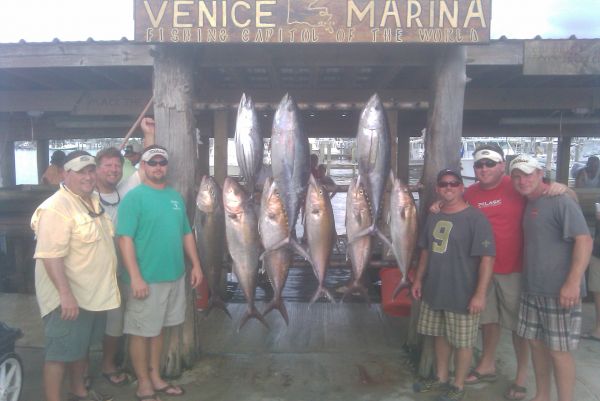 We headed out 90 miles from the marina friday morning about 6 am. The tuna were blowing up all around us. We picked up some small tuna then someone radioed that the tuna were thick out there and the crowd showed up. We moved to another rig to avoid the crowd and caught one right off the bat, then a nice skipjack on topwater. Caught another nice yellowfin soon after and the crowd from the other rig showed up and ran the schools deep with all the traffic. Capt. Hunter stopped at a rig on the way in and we put 6 jacks in the boat in no time. We had a great time and the captain and deckhand were very easy going and nice guys that worked very hard for us. We saw Hunter in the restaurant the next night and he said they left very early that day to beat the crowd and boated 7 before the crowd showed up! I highly recommend Capt. Hunter Cabellero with Paradise outfitters, you won't find a harder fishing guide than him.

Do any of you know of any lodging on the water in venice. We used to stay in a trailer on pontoons pre katrina but not sure if it is still there. Gonna have 6 men august 11-12. If anyone has a camp, etc to let out in the area please pm me and I will give you a call. Thanks

We had our fishing license checked July 1st out by hopedale. First time I have seen an officer on the water all year. I was wondering if it was coincidence or they were trying to catch people who's license had just expired on June 30. Just wondering how many people got checked within 3 days of old license going out. Don't get me wrong, I like seeing them out there and checking but not just when they think they can get someone who forgot the license had just gone out. Thank goodness we had bought ours less than 8 hours earlier.

We caught a 20' spanish mack yesterday in christmas camp yesterday while wearing the specks and whites out under the birds. Is that common to catch one thar far in? 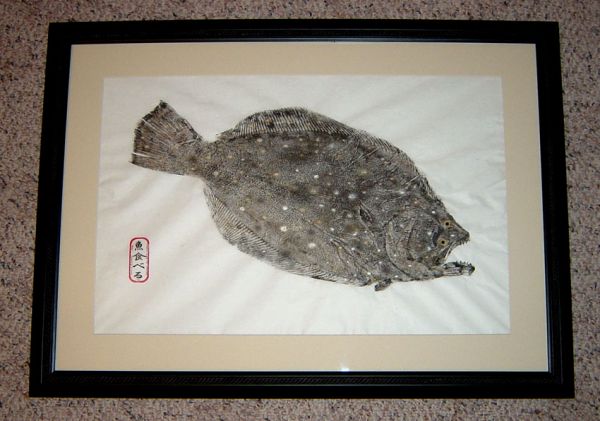 What do you guys think about these kind of fish displays. You paint the fish then press the paper on it. 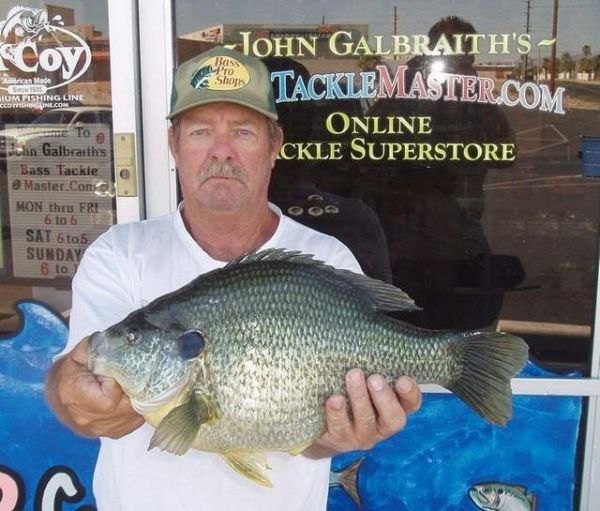 This Arizona bass fisher caught it while making sure his reel would cast. It was on a 7' worm. 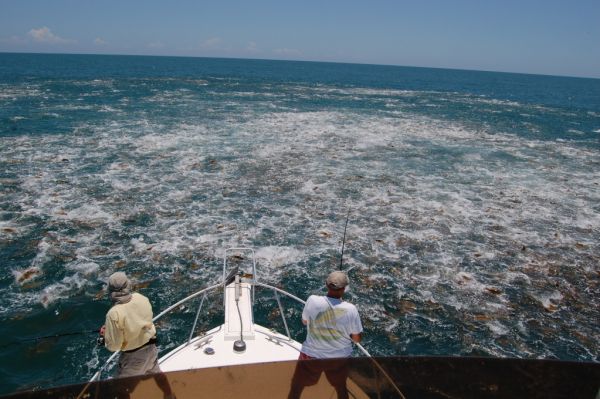 Where can I find salinity levels around the biloxi marsh? 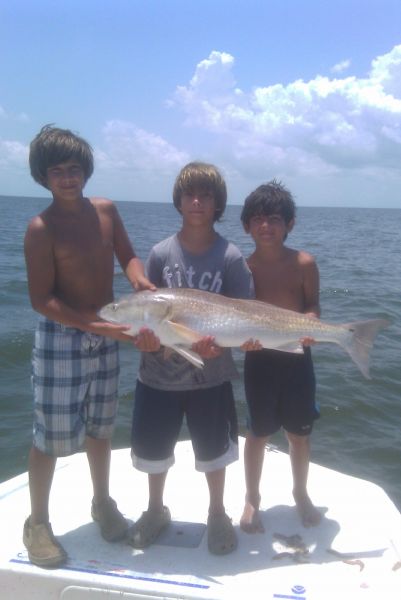 The howling west wind made for tuff fishing yesterday around morgan harbor but we managed 47 specks and one 40' red. All fish were caugt 3' under popcork on 3' natural or white gulp shrimp. Have not dumped specks out to clean yet, will post pics of them later.

Check out this blue bug that showed up at a boil last night. I know it has nothing to do with inshore fishing but thought it was just to cool not to share.[IMG]http://i265.photobucket.com/albums/ii213/kiflong7276/bluecraw.jpg[/IMG]

We had a great trip out of sweetwater this weekend. The specks and reds were biting good if you could find them. We had 3 boats there and the one that fished stone island smoked them. Fish were caught on plastics under PC or just big lead head bounced off bottom, most of the fish were caught 2'under PC with live shrimp. They were even biting dead shrimp when we would run out. The hotspots were stone island, 4 horse, gardene,bakers bay and a small cut on the oak river. The total was around 225 trout, 25 reds, 6 flounder.Also several sheephead and black drum that were released. We fished Sat am and pm then Sun am for a few hours, not bad for going in blind I guess.

I have a johnson 200 ocean runner that will not charge the batteries while running. You can disconnect the batteries and the engine will run fine like the alternator is keeping it firing. Any help would be appreciated. 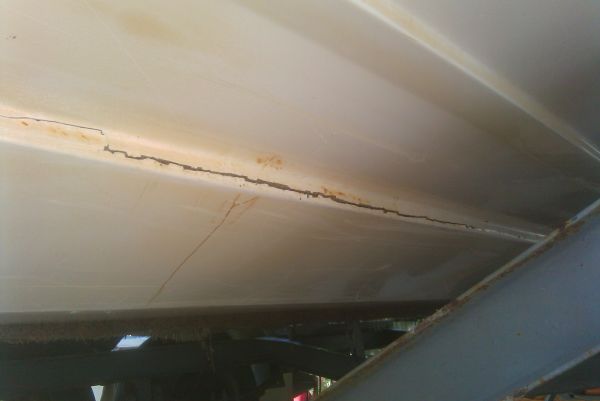 My bilge has been running more and more lately so I jacked up the boat and found this!

Has anyone got any pics of a turkey killed in south La.? I heard they look like osceolas and would love to see one.

Looks like a good deer. Why is your gun pointed toward you?

Every deer that is not weighed in La and Ms are at least 200 lbs! I dont think most rednecks have ever even seen a 200 lb deer unless hunting delta ground.Same goes for turkeys, they are all 20lbs until a scale is brought out.

December 14, 2014 at 7:26pm
A comment titled: Way to go Salty! in response to a report titled: Breton Sound Trout Slam with 4 vegetarians

I think Jesus is proud of you for helping out the hungry. He seemed to be pretty fond of fisherman willing to help mankind.

I taught I taw a puddy tat!

We didn't catch any but had a good time!

Great report. I love the colors on that bottom red, he is beautiful!

October 07, 2013 at 8:14am
A comment titled: sweetwater in response to a report titled: Sweetwater Marina, Capt. Jack

Between me and my friends, we have stayed with Jack at least a dozen nights. Have booked 2 trips with him which he suggested we reschedule because of terrible weather so we did and glad to do it, don't guide the guide. He has put us on fish on every single occasion. The rooms have been very clean and neat every time. No one there has ever been a jerk to me while getting bait or launching unlike another place does. SW is a first class operation in my opinion and will continue to get my money when I go fishing.

What would keep him from reeling in your expensive bait? What if he is a nut job with a gun? Is a fish worth your life?

Great catch! What is in the cans at the crawfish boil. looks like they have holes poked in them.

June 05, 2013 at 9:17am
A comment titled: pogie in response to a report titled: Breton Sound Bullred Fishkill.

I am just a red clay redneck, what is a pogie boat and how does it kill fish?

Delacroix is a great redfish and bass fishery. There are several cabins to rent down there also. Lots of good guides. If it is calm its not far to the outside island either. Just a thought

May 17, 2013 at 7:00pm
A comment titled: wow in response to a report titled: Father-Daughter team none stop action out of Shell Beach.

What about wanting live bait?

Dockside, you better give theses fellas some GPS coordinates or they gonna come looking for ya!

February 21, 2013 at 7:52am
A comment titled: words in response to a report titled: Stolen Golf Cart

That is an awesome catch! That is the most tuna I have seen caught in a night on here. Congrats on a great trip.

You didnt happen to get the anchor just east ot the twin pipelines and oak river at delacroix did ya?