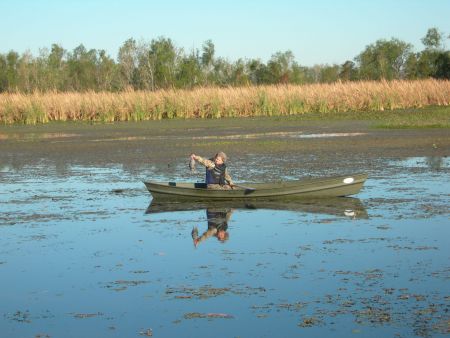 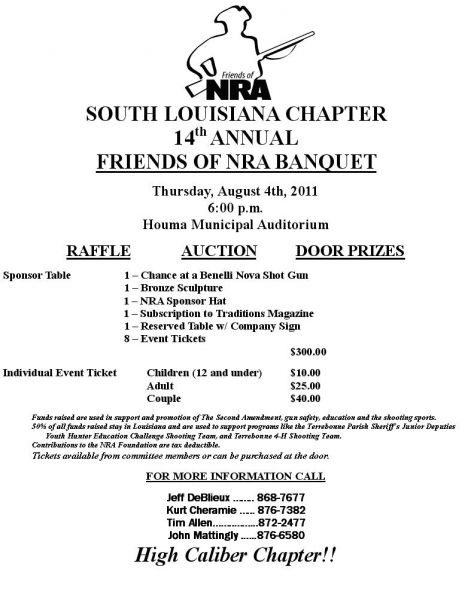 Friends of NRA Banquet: The banquet date is Thursday, August 4th at the Houma Municipal Auditorium on Verret Street, doors open at 6:00 p.m.. This event supports Terrebonne Parish YHEC shooting team and the local 4-H shooting club with all the supplies to practice with. 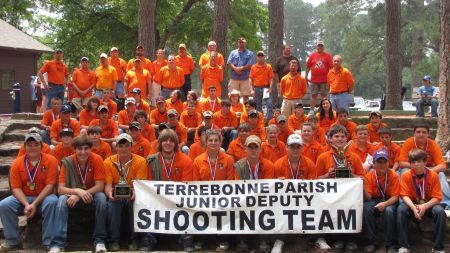 Congratulation boys and girls of the 2010 Terrebonne Parish Youth Hunter Education Challenge (YHEC) team on their repeat State Championship win in the Junior and Senior Divisions held at Camp Grant Walker this past weekend. 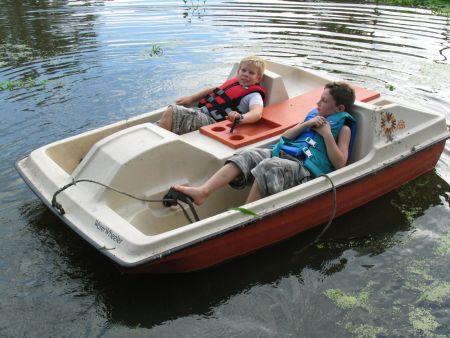 Some Low Life decided that our family did not need our paddle boat anymore and helped themselves to it from my yard. Happened sometime between Tuesday night to this afternoon, my son is pretty bummed about it, can not fish our normal saltwater spots and now can not paddle boat the bayou. If anyone sees an orange bottom/tan top paddle boat in Bayou Terrebonne around the Prospect St. vicinity or here about one for sale, drop me a line letting me know where about, so I can check it out. 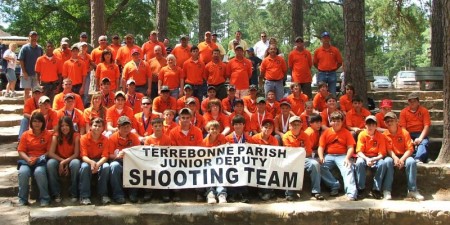 2009 Jr. and Sr. YHEC State Champs, Congratulations to the Terrebonne Parish NRA Youth Hunter Education Challenge Team for a great performance at the state competition. Next stop is National competition in New Mexico... 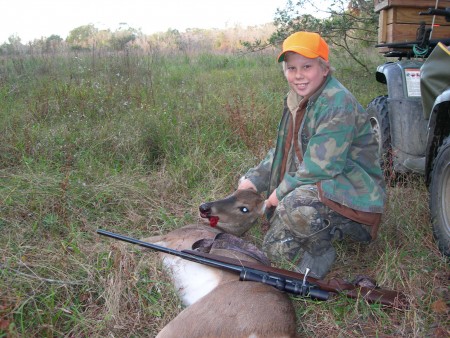 At 4 pm Sunday Nov. 30, my 12 yr. old son got to fill his first deer tag this season. He dropped this doe in her tracks at about 30 yds. using a 30-06 with a 125 gr. managed recoil load. After passing on a small spike on the way to where we were heading to make a ground blind, this 100 lb. doe was passing through the area about 20 min. later. We had another doe come running by as we were tagging this one. It was his first hunt of this season and first deer I physically have seen on my hunts without him, all my other deer encounters so far were in the dark. On another subject, I can easily see where someone hunting for years could just start dragging a deer and forget to put the Harvest Tag on, I started to drag this deer out and remembered about tagging the her after a couple of steps, but could have easily forgot altogether...EJB 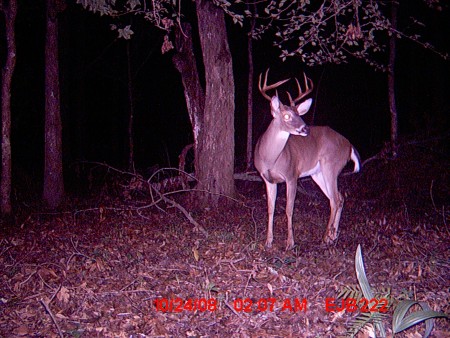 Does the flash scare the deer? Take II one minute later. 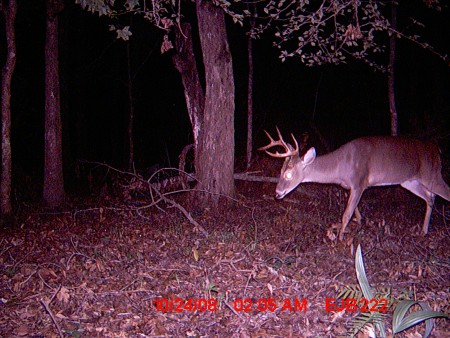 Does the flash scare the deer? These sequence of pics were taken with a Moultrie D40 set to 3 pic blast. Have another set I will post only 1 minutes later. There is no corn, rice bran or soy beans put out, just a spot I found that deer like to cross and a scrape shows up every year. 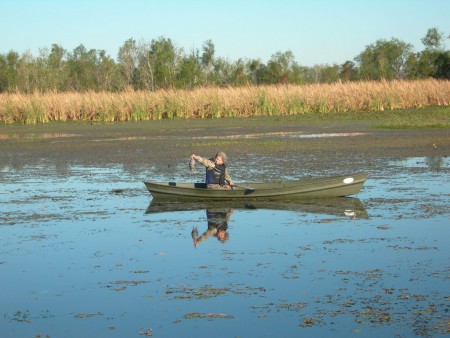 My son and me got choosen for one of the Nov. 8 Lottery Hunt blinds on Mandalay Wildlife Refuge, it was his first duck hunt in the marsh, shooting his own gun and he was some excited. Told him to enjoy the total experience of the whole hunt (predawn boat ride, sunrise, marsh coming alive) and not just the shooting. Think he understood what I was saying after it all happened and not just something in a video game. Was not a lot of ducks, coot and gallinule, but enough to keep the action some what steady and make for a good first hunt. Had teal sitting in the decoys before shooting time and had to wait before shooting. Let my son take most of the shots, which is what the management area is promoting and he ended up with a pretty good mixed bag of waterfowl that he is proud of. He could not wait to get home, clean and pot roast his harvest with some cajun fried rice. He is ready for deer season now. Attached a few pics of the hunt.

Watching the water rise in Cocodrie.

Here is a link to the weather cams at LUMCON in Cocodrie: 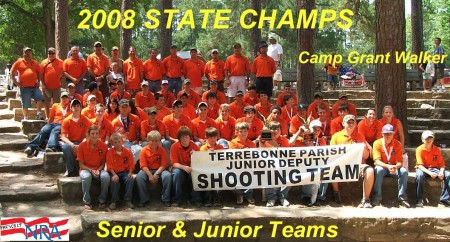 Congratulaion to the Terrebonne Parish NRA Youth Hunter Education Challenge Team on winning the State Competion held this past weekend at 4H Camp Grant Walker in Pollock, Louisiana. The team consisted of 51 youth, male and female, ages 10 to 18 years old and competed with other teams from around the state in Jr. and Sr. Divisions with the Terrebonne Parish team winning both divisions. Each team member competes in archery, muzzleloader, shotgun, .22 rifle, responsibility exam, safety trail, orienteering skills and wildlife identification. 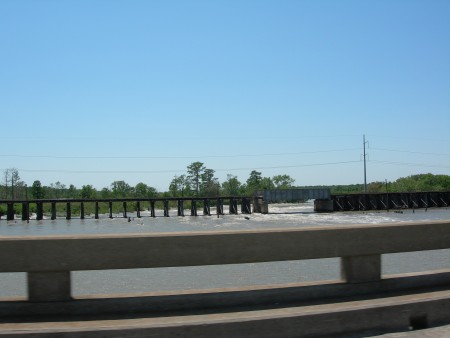 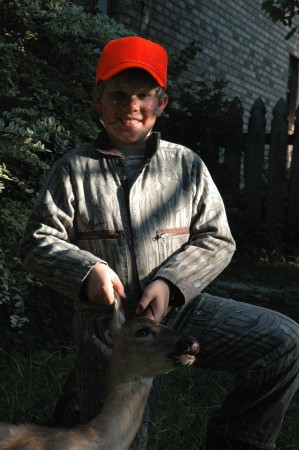 My 11 yr. old son got his first shot at a deer on Youth Deer Weekend today, Oct. 27, 2007 at 7:30 am and dropped him in his tracks. Just a button buck, which we did not know till the ground check, but that only added to his excitement of taking his first deer. He was also excited that he spotted the deer in the palmetos before me and was able to setup for a shot without spooking the deer. Made the kill with a 30-06 loaded with Rem. 125 gr. Managed Recoil and made a perfect 60 yd. shoulder shot. The shot was a little on the high side, missed the backstrap, clipped the top of the shoulder blade and only messed up a few ribs, but took out the lungs. He said he is ready to go get a big one now.

Story on NOLA.com about Kyle's surgery, we can all be proud of pulling together to help make his life better.

The high-tech coil of electrodes implanted deep in his right ear enables 6-year-old Kyle Couvillion to watch television, recite his ABCs and befriend other children in his neighborhood. Without it, his world would be silent, and he would communicate through sign language instead of through his chirpy, idiosyncratic voice.

But because he only hears out of one ear, he cannot tell what direction sounds come from, so his parents do not let him cross the street by himself. The least bit of background noise makes it difficult for him to sustain a conversation. After three years of intensive speech therapy, his mother still occasionally has to translate for him.

At a summer camp for the hearing-impaired, Kyle's parents met children who had cochlear implants in both ears instead of just one. They could speak and hear as well as children who had been born with perfect hearing.

In the future, please don't post articles from other sites in their entirety. A link and a few paragraphs will suffice. We have to respect the copyright and content of other websites.

Bourg, LA
Pop's All Hand Made And Hand Sewed 2 Ring Galvanize Rings 22inch Top Ring And 18 inch Bottom Ring. 12 Foot Guide Rope With Large Highly Visible Cork.
These Nets Are Not The Cheap Cut Out And Put Together Nets!
Their Are Cheaper Ones Out Their But Ours Are Quality Made You Pay For What You Get!
$160.00 A,Dozen $80.00 Half Dozen.Ernie DarDar Houma Online Yard Sale

We helped you with this before:

Works with the cheap fabric sheets also and great for the front of campers/travel trailers. The bugs must be held on with static cling, because they sure come off easy with those sheets. Waxing after sheet cleaning helps for the next time to get the bugs off a little easier.

Live just North of Prospect St. and do not make it that far South in my yak, but some teenage neighbors take their small boat that way and do good.

Do not try to net the fish too soon, have to be patient and play the fish out.

Bayou Terrebonne not back to how good it was before Rita, but there is plenty bass.

Just past Cannon's landing heading back towards Houma, there is a road side park that people fish from the bank, you can launch there and fish Bayou Black along Hwy. 182. No motor boats are allowed in that section and it is closed off on each end. Bayou Terrebonne does have some bass and can probably launch just south of the Prospect St. bridge off of Main St. and work the bayou both ways and not much boat traffic.

Birds, look for gulls diving, but don't run right up to them, shut down and drift or troll motor to the area.

Get what you pay for, do have cheaper, but will it damage vehicle or hold up at 70 mph?

Has a video on this site to see how they attach:

Go out and have fun, plenty water to use, just be courteous to others.

Might want to call Bobby Lynn's, don't know if they still rent kayaks.

No rentals in Montegut, may have to rent from Massey's, Pack'n'Paddle or Backpacker and haul it with you.

Sometimes, but how deep is the question only you can answer by trial and error.

Find a good deer trail and follow it, most of the time you want sink, do remember, deer are not scared to get wet and sometimes you have to crawl out over that stuff to retrieve a deer(getting wet). For the Tripod legs, cut some 18in. to 24in. plywood disc for the legs to land on, but need some kind of spike on bottom of legs to hold them in place.

308 Managed Recoil- Would get him a 308 or 30-06, buy the managed recoil ammunition and he has a gun for life. My son was small and started out with 30-06 managed recoil and now shoots regular rounds. I know that Ruger sells a 308 with a set of stocks for youth/adult and also has a compact model with shorter features.