I like in response to a report titled:  builders

Looking for a place to take my son squirrel hunting this year. somewhere close to baton rouge. I was thinking about checking out Cat Island. Ive never been there before, any suggestions, what about any wma's?
thanks

Capt. Paul,
My wife just bought me the Garmin Gpsmap60csx for Father's day. What would be the best map to purchase for marsh and coastal fishing? I know I will have to buy from Garmin, but not sure on the right one.
thanks
Ryan Frederic 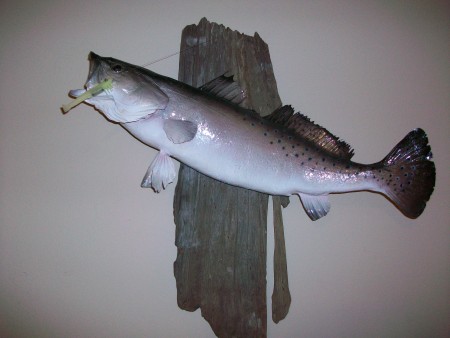 Here is a pic of the speck I caught last year. Mounted by Darryl Smith in Prairieville. 7lbs, 28"

arrived in lake mechant later than I wanted to. Pulled up to some birds working and dropped the trolling motor, trolled over and landed my first two specks and my trolling motor stopped working, thought it was a plug problem but you could hear the motor switching on and off. looks like ill be bringing it in for repair. anyway I motored to another spot and started drifting, made several drifts and had my limit at 10:35 am. most were 13-15in all caught on a purple/chart. Shiney Hiney under a Cork. left mechant in search of some Reds, but the wind was wipping and with no trolling motor,i gave up and went in. not a bad day

heading there this weekend. staying over saturday night? any reports of the area?
thanks

What tide station do you use for the Dularge area? how much time do add?

How do you find out information on whether or not state land is available for lease or not. looking for a place to build a camp? 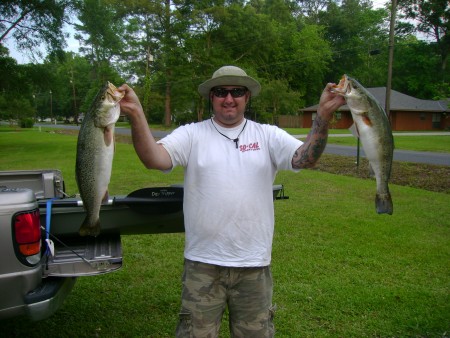 caught these while fishing from my kayak. they fell for some dead shrimp under a cork, caught yesterday april 23.
one weighed 7lbs the other was 4lbs
it was a good day.

I was wondering if anyone knew of any hot spots for surf fishing or anywhere i can do some fishing without a boat.
I sold my boat last year and i am working on getting another one. i got the fever but i need somewhere to go.
any ideas would be greatly appreciated
thanks

I like long walks on the beach and candlelight dinners

I was out there yesterday afternoon. They are still there

those are some neat photos. so much feeling in them

Here is the best place to stay in Dularge

I have an Okuma Inspira 30, i love this reel. one of the smoothest reels I have owned. If you spool with braid make sure you put on a mono filament backing tied with a blood knot to your braid. it will stop the braid from spinning on the spool.

Ive used them and had pretty good success around the Dularge area with the Purple Jig head and the chartreause shrimp tail plastics. the plastics hold up suprisingly well. ive caught a limit of specks with out changing out the plastic. The only thing i didnt like was the corks that they come with. Most of the cork was submerged under water and the visibility wasnt that great. I just used them with a different cork. hope this helps.good luck!

theres some of those rogue Dularge ice bergs again!

Hey Travis, that was me in the POS aluminum boat. we finished up our two man limit after you guys left, they really turned on once the water warmed up a bit. played catch and release for a while, ended up tagging a few also.

glad to see someone catching some fish!. nice mess you got there. also enjoyed your marsh works video. saw it on facebook. i love me some marshworks products!

ive looked at them but never tried them. Ive always wondered if they would actually catch fish. let us know how it works out!

i would think that those rails would be stainless. aluminum would be way to soft a material to use for railings

Hey Tmiller, I also saw a speck yesterday swimming like he didnt know where he was going. I hit him in the nose with a swim bait and he didnt flinch. I could of netted him but I let him swim away. Icdots, I launched at 12:00 noon, water temp was 54 to 55 degrees. made several stops and Not a single speck, but mananged to catch two small reds, they werent even keepers. it was better than being at work.

Tmiller, do you have a blue wave?
If so was that you in Mud lake wednesday?
I was in that pile of crap aluminum bass boat.
Did you do any good?
Ill be out there as well tomorrow afternoon
Hopefully with the warmer water temp, the fish will turn on
Ryan

Stopped in Songy's on my way to dularge today. they now have the shiney hiney in stock.

January 13, 2010 at 7:54pm
A comment titled: shiney hiney in response to a report titled: Shiney Hiney

I know you can buy it at The Falgout canal marina down LA315 in Dularge.

these are not the H20 brand Jig heads. these jig heads are made by Marsh Works inshore Tackle. Chris makes some heavy duty tackle that works! check out his website and place an order! you wont be dissapointed. He makes spinner baits, buzzbaits, popping corks and plastics also. check him out!
http://marsh-works.com/

OUTCAST has not filled this section yet.