Mullet in response to a report titled:  Gar Bait

I am looking to get a good vacuum sealer. What is the best bang for the buck? With the price of a roll of bags were is the best place to get some.

I recently purchased a used youth 243 H&R with a redhead 3x9x40 scope with Hornday 100gr bullets. The best group I can get with this setup is 2.5inch group at 100yrds. Is this the best I should except? I am thinking try different bullets or another scope.
Thanks

Has anyone ever tried the silencer that you put on a ATV muffler? How does it work and is worth the money.

I was wondering if anyone has been seeing any mullets around the spillway or blind river area. I am looking for some for gar bait. Is there anywhere I can buy some. Thanks

I am looking into getting my first Zero turn lawn mower and was wondering which is the best for the buck. Thanks in advance.

Does anyone know if there any camps for rent that are directly on the lake with a pier, Besides big lake guide service? Thanks in advance

Has anyone tried the 1 3/4 hp meat grinder from Cabelas? Will this grinder stuff sausage while grinding or do you have to grind the meat then change the plate to stuff. Thanks

I am looking for a good Deer Sauce Piquant recipe, if you got a good lets hear it.

Does anyone know where I can find some Rem. managed recoil bullets for a 308.

I was wondering if anyone has any info on the Marlin 444. I am thinking about buying one.

Anyone tried the remington sure shot trail camera?

Has anyone been seeing any schools of mullets around? I use them for garfish bait.

Does anyone know when the garfishing rodeo is out of Blind river?

I was wondering if the Tchefuncte river is open or is closed due to the oil spill? Has anyone been crabbing near the mouth of the river lately?

I am heading over to Big Lake this weekend and was wondering if anyone has any reports or pointers.

HAs any tried the BUCK BOILER for skull mounts?

I was wondering if anyone has heard if the Wildlife and Fisheries has closed the Deer season around the Blind River area due to high water? 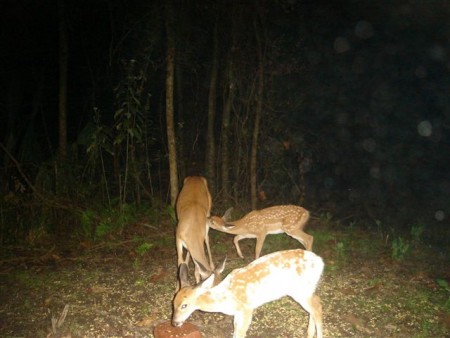 I was thinking of making a trip to the powerpoles around La Place and Manchac this weekend, any pointers as to where the fish are at in this area would be very helpful

The bass in the blind river area are not bitting because the water is high and muddy due to all the rain. I usually catch the mullet with a cast net while they are swimming on top in a school.

July 26, 2011 at 4:47pm
A comment titled: spec in response to a report titled: LAKE MARAPAUS REDFISH

Did you have any luck catching any specs

July 22, 2010 at 1:51pm
A comment titled: crabbing in response to a report titled: Tchefuncte River crabbing

I am going to be using chicken necks and a string not any traps. Thanks for the info

Do you know to get in touch with them, I called the number on the website and is says it is disconnected?

March 04, 2010 at 11:01am
A comment titled: Fish in response to a report titled: Specs in Lake Pontchartrain

someone could have atleast told me a lie!

August 25, 2009 at 9:30pm
A comment titled: steering in response to a report titled: Baystar Hydraulic Steering

Thanks for the info guys

I bought 3 new ones from Wholesale Battery in BR, 2 deep cycle and one cranking for 69.99 a piece. These batteries are the maint. free ones.

I just had a 20ft V bottom boat built by Gaudet, it has reverse chimes, a pad,and gillbracket. I am waiting on the boat to get rigged right now so cant tell you how it rides, but it looks good.

I have a custom CC 20ft V bottom built by Guadet, Thanks for the info guys.

I am not looking to win any races, just get around with a good load in the boat( 4-wheeler and some gear), with top speed around 45mph without a load. The 140 Suzuki sounds like it may underpower the boat. Would 150hp Optimax do better. I found a used Opti. Thanks again for the info

June 10, 2009 at 2:20pm
A comment titled: Millennium stand in response to a report titled: Lock on stands

Thanks for all the input! I went with the Millennium stand and love it.

where is the best place to get the Millennium? Sabine pool in Gonzales has them for $180.00

We went down there and the only thing we managed to get to bite was a Jack Carvell 3 to 4 feet long. The fight lasted 3hrs and 25 min. before he broke off. At least we had this action

coonass28 has not filled this section yet.