Pics of our Vermilion Bay friends

Nice Deer in response to a report titled:  6 years in the making

Pics of our Vermilion Bay friends 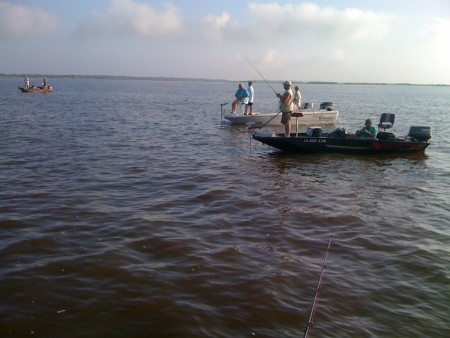 Here is an example of the bird chasers in Vermilion Bay. I was drifting when the birds decided to start working off my Port side. Notice my fishing pole in the first pic. These guys were close.

Jeremy, these are probably the same guys that crowded you also. If you look at the second pic you can see your boat about 300 yards out.

My mother's dog was hit by a car and passed away this evening. To make the matter worse she watched the whole thing happen right in front of her. I have read some great prayers and poems posted here in the past and I would like to pass a couple of those on to her. I have tried using the search function but have had no luck. If anyone can help me locate these prayers it would be greatly appreciated.

My '07 F-150's tow lights are not working. The first time I realized I had a problem was when I went to backup my boat trailer and the lockout solenoid did not engage. I thought it would be an easy fix at first but now it has me scratching my head. When I checked the fuses with a test light I discovered there are 5 fuses not getting power at all (both sides of the fuse are dead). I have tried swapping the relays around to see if maybe it is a bad relay but keep getting the same result. I Looked under the hood and the only other fuse box is for the 4 wheel-drive.

Does anybody have a suggestion?

Thanks for the help

Just a reminder that Monday is Labor Day and Banks will be closed. So make sure to cash your checks either today or tomorrow, if you will need the funds for the hurricane.

Man I hope this is not a one-two punch to the U.S. Coast. Things are really starting to pick up in the tropics.

This weekend I fished an area that had mullet everywhere. By the thoussands. I fished for several hours with artificial and fresh shrimp and caught nothing but cats. What causes all of this mullet to congrigate like that? And where were the other fish?

I jut purchased a chest freezer for my garage and my wife is concerned about plugging it into the GFCI outlet that is currently located in the garage. She heard the switch will trip frequently because of its location. Have any of you encountered any problems with this?

Hey guys I need your help. My 12 year old nephew wants to go hunting with me tomorrow morning and I am not sure if he needs a permit or not. Tried calling The Army Corp. of Engineers in Port Barre, but they are closed today. Does anyone know if he needs one?

He is not bragging about shooting a deer that was hand fed. He is happy that by properly managing the heard they are now seeing the reward for being patient.

October 15, 2011 at 1:39pm
A comment titled: Opposit direction in response to a report titled: Hold my beer and Watch this

I don't think the photo was doctored just a little misrepresented. I am not calling the OP out either because he said he received the pics in an e-mail. I think the boat came from the opposite side like CPD said and the ruts were made by a four-Wheeler.

I'm thinking those ruts weren't made by the boat. The boat has three engines but only two ruts and the center motor would have been the lowest. That is also a long way to travel with a heavy boat and lots of friction.

Still an idoit that should never be able to purchase a boat ever again.

'Meaning if they go there earlier they would basically have been floating around doing nothing. '
That is exactly what they should have been doing. As you stated they weren't sure how much oil was leaking so why in the world did they only have the capacity in place to only collect 15K barrels a day when everyone thought that was the low end of the projected flow. They should have been had enough ships in the area to handle 80K a day at a minimum.

Well BP said that they would have extra capacity to collect more oil by the middle of July then after being pushed by the administration they now claim they will be able to collect the 50K barrels by the end of the month. Why did it take the president and coast guard to get them to expedite this process? It shows they aren't doing everything they can.

June 14, 2010 at 8:11pm
A comment titled: Sorry for coming across wrong in response to a report titled: Saw blade stuck: Why cut the pipe from the bottom?

I apologize if my comments came across wrong. I was trying to tell you that my no means had the leak slowed. I even attempted to attach a picture of the actual stuck saw but couldn't figure out how to resize it.

The saw is like a band-saw. It uses a small wire like blade to cut so there is no restriction blocking half the pipe.

I am having the same problem on a 2005 Mercury 150 EFI. It is constant beep BEEEEEEEEEEEEEEEEEEEEEEEEEEEEEEEEEEEEEEEEEEEEEEEP. It seems to only happen when trying to take off again after idling for a while (e.g. no wake zones) and if I turn the motor off and restart the alarm ussually goes away. I have changed the water pump and thermostats and my next move is to change the poppet valve.

Sounds like he is referring to Caldwell Reef. Never heard of a Murphy reef to the east. Is it the same as Pavies(Sp?)?

May 26, 2010 at 8:03pm
A comment titled: Yep! in response to a report titled: Recreational closures explained more fully

I was clicking the link to the right.

May 26, 2010 at 10:40am
A comment titled: Loop in response to a report titled: Recreational closures explained more fully

I fished the cuts of shark bayou a couple of weeks ago and could have smoked tons of gar and several sheephead. The problem would be the water clarity could change at any time out there.

Clint, I tried to respond to your PM last night and for some reason I don't think it went through. I will try again tonight for you. I marked a couple of landmarks on Google Earth to help you out.

Please don't think I am trying to get an accurate number of barrels a day from looking at what the pump pushes. I am just showing Mike and the others that a heck of alot of fluid can travel through a 6.5 inch pipe.

I think the difference in the PSI more than makes up for the density.

Is my math flawed? Remember that is with a 2.5 inch intake not 6.5 and I know that well is pushing alot more PSI.

The new updates take so long to upload on an I-Phone it is almost not feasable to do so any more. That is with 3G connection where other sites load fine.

When I am on the main report screen the header is blank. You can't see the original poster or location.

April 23, 2010 at 4:14pm
A comment titled: Shock Collar in response to a report titled: retriever training

I had the same problem training my lab when she was a puppy. I started by walking 2 miles a day with her on the leash and every so often telling her to sit. I would walk a little further and tell her to heel, and pull her to my side, as I continued to walk. Once she got good at that exercise, I started dropping the leash and letting her drag it while on our walks. I would tell her to sit and walk away from her increasing my distance as time went on. If she got up before I called her I would return her back to the original spot and walk off again. Then came the time to take the leash off. She took off like a bat out of hell. It was so frustrating because you have no way to correct them and by the time the finally do listen you can't punish them because they finally did what you wanted. The only way to do it was with a shock collar. With the collar you can reach out and correct them when they are acting up. I always tell my friends it is like her hearing aid because you can whisper commands to here when she has it on. LOL. One thing to keep in mind is the shock collar is used to reinforce commands not train them. Good luck and enjoy your dog.

April 21, 2010 at 9:42am
A comment titled: Drew in response to a report titled: Down With CCA! Help Bowfishing

Let me first state I have never bow fished before. But think your argument about method of catch is pretty lame. I know you are playing Devil's Advocate so I will take the other side.

If CCA arguement is that it should be made illegal because it increases your chance of catching your limit. Every sportsman needs to worry. Now I am not sure if that is their argument but if it is..... What would they go after next? Night fishing? Fishing during certain lunar phases? How about the use of live bait?

My personal opion is as long as it is not harming other species and they only bag their limit. Have fun.

March 25, 2010 at 7:32pm
A comment titled: Indian Bayou in response to a report titled: henderson lake

I also hunt Indian Bayou and have been hunting the same area for the last seven years. Sunday my dad and I went out to our ussual spot and found someone had pulled their big ole floating blind and tied it up right in our spot. Now even though they are not supposed to leave a blind setup on Indian Bayou once you leave. I am okay with them having it there as long as they respect us if we get there first. But I am waiting for them to show up and raise hell because they think their blind saves the spot for them. But we have been three times in the last two weeks and no one has shown up. I actually took a picture of the blind the first time we saw it to put it on this site. I wanted the owner know he is not the only one hunting that spot.

Did you get a good look at the guys? Where were you hunting? I saw your comment on another post and you mentioned shooting a good number of mallards. We have never had a day when the big ducks were plentiful. We may see one pair every hunt. Do they tend to fly much later in the day?

Lone Shark has not filled this section yet.