Dogs in response to a report titled:  Looking for deer dogs?

Does anybody have any experience with the rem700 muzzle loader.
I have one and the dang thing would not fire the cap for 5 tries this morning. I broke the bolt down yesterday and cleaned and oiled properly. The thing still hung up this morning. ANY IDEA what I can do,,, B4 I wrap it around a tree!!!!!!!!!!!!!!
I can't really justify buying an Encore yet!?!?!?!

I am looking for a hunting "CLUB" For NEXT year. And I say Club, to find a group of guys that stay in touch with each other and hunt under sound guide lines. Hope to find somthing in the 1 to 2 hr range of Opelousas. If anybody might have an idea or know of upcoming openings, PLEASE Email me .....

Thanks and good luck this season.
TF

ACADEMY HAS A SPECIAL ON HUNTING SCUBA GEAR!!!!

also on sale are spearguns. for those diving Deer!!!!!

I WAS WORRIED THAT I DIDN'T HUNT TODAY BUT WELL WORTH THE COUCH TIME.......

Jeff,
Back in 2001 the Sportsman magazine ran a story about the Chauvin Tract of Russell Sage WMA. In 2001 the Legislature passed a bill allowing the LDWF to trade the land with William Brockman ( SB1055 or ACT 1037 ). Well as of the middle of Sept 06 the deal was finally complete. In exchange for 300 and something acres of prime bottomland oaks the state got 700 acres of fields. Also in 2002-03 in your year end Big Buck round-up you featured a guy by the name of Paul Fontenot and the story was about 2 big-bucks bow killed on public land. Those 2 bucks were killed on that tract of land. I guess what I was wondering was if the Sportsman would write a follow-up story showing how we as sportsman are continually getting the raw end of the deal. I would be more than happy to provide pictures of what we had, compared to what we received in return. Of course the LDWF believes it was a good deal because of the value of the 300 acres compared to 700 acres, but it would take 25 to 30 years before anyone could truly hunt the new property.

It seems to me that our state has a mind to keep us sportsman from knowing the truth about their intention on the deer herd in our fine state.
2 things have just come to my attention concerning the deer herd and archery only in the state,
1) the dept has intentionally kept the deer herd at HALF capacity in Shureburne. WHY?????? Too much work is what the Managmnet guys. These are the words of a state wildlife biologist!!!!

2) Our state has very little archery only Public hunting areas that ccanbe hunted thru the RUT. THEY HAVE JUST GIVEN ONE OF THE BEST 300+ ACRES of ARCHERY ONLY that I have ever laid eyes on WHY????????

Why has my report about the Archery only wma been pulled Sportsman?
The truth needs to be known about our LDWF!!!!!!!! 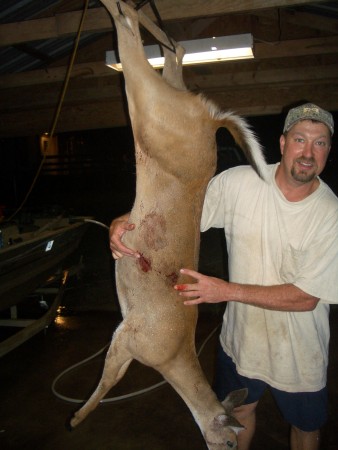 Man was it HOT or what??? JEZZZZZZ I thought I was going to PASS THE FLIP out. I was sucessful in slaming two NANNY's.
Sunday I had five does and fawns under the stand within 25 yrds. Now this was on Public WMA. Not bad for Public area. Shot a doe that night and lost her in private property. Couldn't get the Property owners to allow me to find her. What a bummer that was. Nothing like the arrogant A Z Z holes of North Louisiana.
Anyway Monday night we went back to the same area and we were fortunate enough to get on the does again. I got a real clean shot and watched this one drop at 45 yrds out. 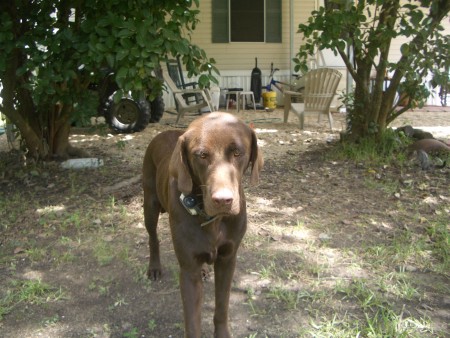 Chocolate male lab for a good home. born sept 05 never trained only a pet. AKC reg, all papers and shots up to date.

Just returned from Alexandria. Left Sunset at 6:20 am returned 10:30 am. I saw 13 deer along I-49 between Washington and Turkey Creek exits. Mostly Does but a couple young bucks here and there. I travel that route a lot, ussually see them at night. That cool snap has em moving man. Hope they stay active through the weekend.. CAN YOU SMELL THAT?????? yep without a doubt it's DEATH in the AIR...... AAAIIIEEEEEE!!!!!!!!!!!! SWACKER 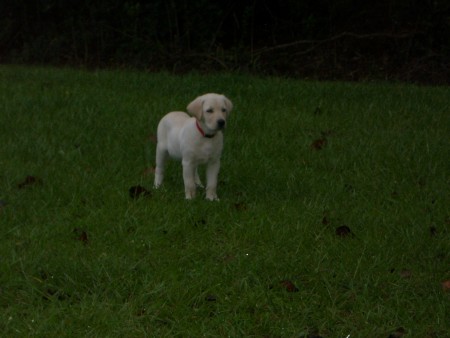 MAN she ain't to far from ready is she. Got her working two dumbies.( thats right Doubles at 9 wks)with the GUN BLAST, SIT, STAY and COME working regularly. Real good nose and willingness. Blind retrieves are close but she is still a little short legged yet for the tall grass.

If any of you guys ever want to start with a good breed of HUNTERS and WORKER blood line, just let me know. I have raised three labs in the last 7 yrs and this BLOOD line has the STUFF hands down.

Can Anybody tell me how long the Henderson swamp will stay drained? Also how many times and how often they expect to drain it? The word I heard was 3 times over the next 3 yrs.
That's fine by me if they close the drain early enough for duck season. Our property is directly effected by hendersons water level.
Any solid info on this would be great!!! 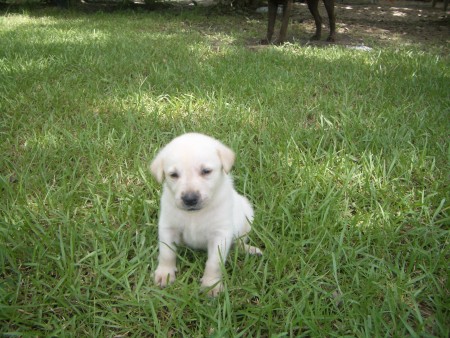 Now this is a true cajun duck fetchin MACHINE here!!!
FC AFC Rippin Blue Thunder (Rayville dog) and FC AKC Marceaus Diamond Bowzer are the blood line champions in this line....
6 wks old today and sharp as a tack! sitting and fetching (only my cap) but doing it.... chews on the kittens regularly.

You just can't beat the companionship of a good LAB!

Smashed the doves Yesterday and we're headed back today for more punishing..
*****On our way to the lease we saw lots of large groups of NEW teal headed south. They were all between 90 and 14, west of Kaplan. While hunting doves I saw atleast a dozen flocks buzzing the area. Looks good for the openning day....

Just came back from the duck Fest field trials ...WHAT a blast and a thrill to set off the feather itch we duck hunters all have!!! Just wanted let those who might enjoy a quality lab working to get out and enjoy the show.

A bit hot but well worth it for the show these dog put on....

Just wondered what the hell happened to this place!!!!!!!
I used to hunt these woods regularly. Killed some fair deer with Bow and gun.. I recently scouted the old hot spots and I'd swear that the place was nothing more than a burnt out Dog hunting club! I have hunted Shurburne since the first season it opened until '00 when I had to move out of the area with my job.
The season harvest was around 600 to 700 deer on a regular basis.
I don't think I saw enough sign for 1/2 dozen deer during 1/2 day of scouting.
ANYBODY HAVE A CLUE what happened to the population of the deer there?

Nutcracker got it !!!!! WAY TO MUCH NOISE WITH aluminum

Get a labador, Might bark a little once located but will hush on command. I have had 5 and all took to it naturally.You can get them to trail; if you train them. But nature will let them sniff up a down deer once they have smelt one!!!!!.

This has been my observation by recording the past 12 yrs. from Monroe to north side of I-10 Mid Basin area.
I found The rut in Louisiana to vary with the area you are in. The futher North you go you may find the rut is a little more dependable, between Thanksgiving to Christmas. The lower in the state you go it seems to run about a month later with more irregularity ..
The moon may play a bit of a roll in the ABSOLUTE PEAK, but the weather and temp seem to play a bigger role in the day time activity that we see during the day light hours..
Of course the buck to doe ratio is a big part too,,, so... I just focus on Slamming the tree from 1 week b-4 turkey day till new years! BEST TIME OVER ALL IS 3 weeks from now in the northern part and Christmas in the basin area.

Did you age that Buck? I'm curious , Be willing to bet hes younger than you might think! Let us know when you find out the age.
What do yall think? 2 1/2 I'll say?

YEAH ABOUT THE AGING OF THE DOE!!!!! WHO'S GOING TO BE THE PRO AGE GUESSER.

The top pic is a cat with no doubt but the second 2 appear to be yote tracks. I'm willing to bet its a MUFF Cat!!! Anybody knows what that is?

Thats JUST the kinda guy I don't want to meet up with while hunting.
WOW!!!!!! This should be shown in all hunter saftey classes!!!!!

October 23, 2006 at 1:50pm
A comment titled: Nice in response to a report titled: Ouiska Chitto Deer

It's funny that you posted this. I was nearly laughed out of the DWLF a few years back when I saw ,AT EARLY light chasing a doe thru Black Bayou NWR in Monroe, What I thought was a panther/cougar!! Until now I too was doubting what I saw! Thanks for the posting. I need to trust my EYEs more!!

I have the 209 conver on it already. It's in the bolt that the problem is..It won't release all the way to stike the cap.

October 21, 2006 at 8:29pm
A comment titled: LOGGY BAYOU in response to a report titled: deer stands

Whats wrong with yall, Must like sweatin ...LOGY BAYOU all the way.....

Sure man, I 'm talking to a few guys now so I'll let you know if I find one with potential.

GREEDY MTF that has the launch. by the name of Ronnie.
Now if you are willing to kiss his a z z he will let you use the launch.
the Dept has a new Launch in the camp ground!! get this ,,, its all dirt huh yeah our TAXES at work ...FLIPPIN dept SUCKS

YEAH MAN Good story Widow, Love the shakin and knee knocking! I'm with DUDE !!! when those does stop my nerves from freaking out I'll lay the bow down TOO! But that aint even close to happening..

The best hunts in my life have been the "ONE" That got away!!!

I thought it was from all the excitement and expectation of that BIG NANNY you always dreamed of slipping thru the woods straight to your stand......

HEy man that's a deer in the back!!! I can barely see the image of its body It looks to be about 30 yds from the yearlings. the body of the deer is on the left side of the EYES!!!

October 18, 2006 at 7:55am
A comment titled: wow in response to a report titled: Michelle Carmouche's pets

That nice to see . thanks for the pics

Stick n string has not filled this section yet.