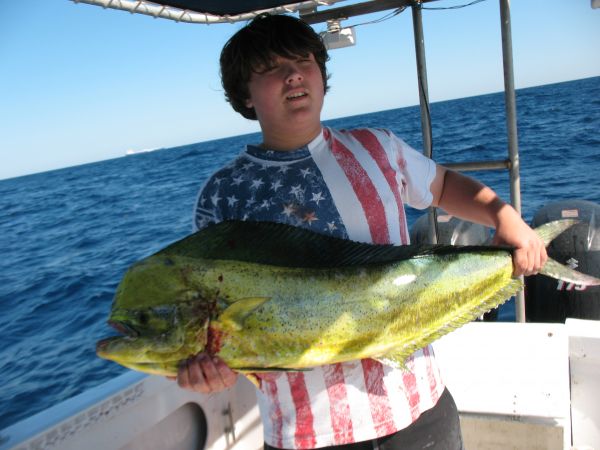 The blue water is not far out. I saw more flying fish than I have ever seen. 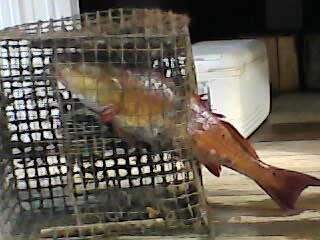 The trout are starting to show up in the surf early this year. Had some customers catch some around the rocks the past 2 weekends. The crabs are also in the surf thick already. Bull reds crashing the bait along the surf and in the bays. Carmardelle's seafood caught this hungry red in a crab trap. 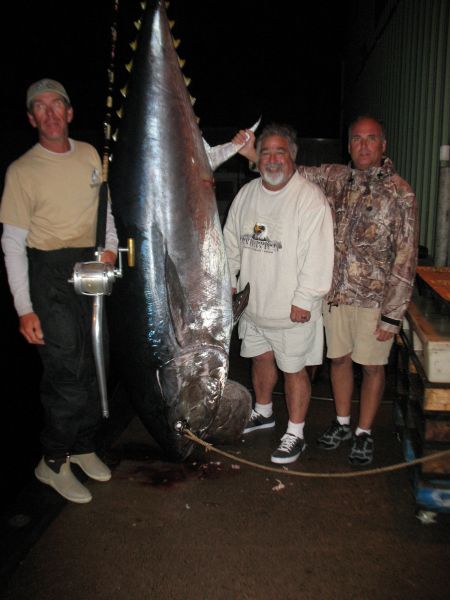 Caught this monster in the atlantic last month. It took 6hr 15 min to land. I was sore for 2 days.We went with Tuna Hunter out of Gloster. 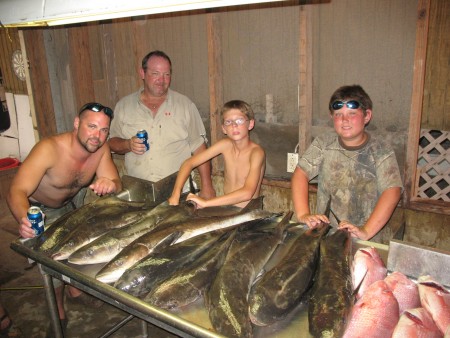 Caught lots of cobia this week. Took the kids out and they had a blast. 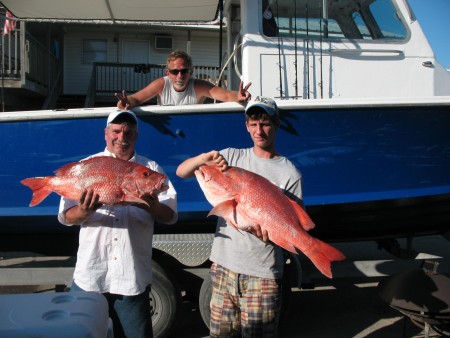 Went fishing for amberjack and figured we would get a limit of snapper too. We used live hardtails down to about 150 ft for amberjacks and caught some BIG snapper 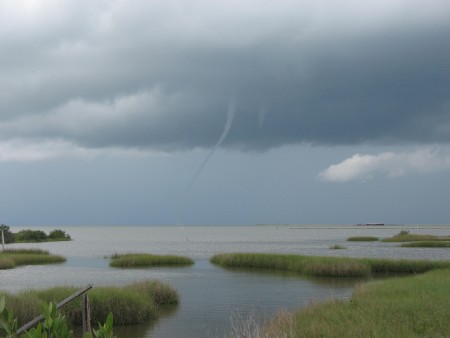 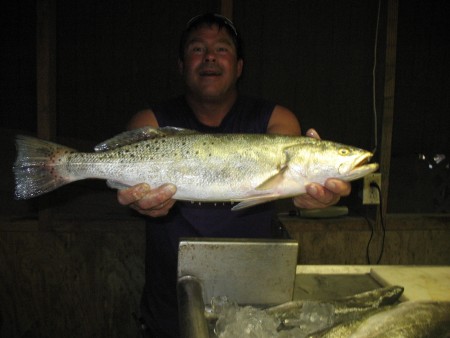 Short fishing trip yesterday morning. Caught these trout by 9am. In the surf. 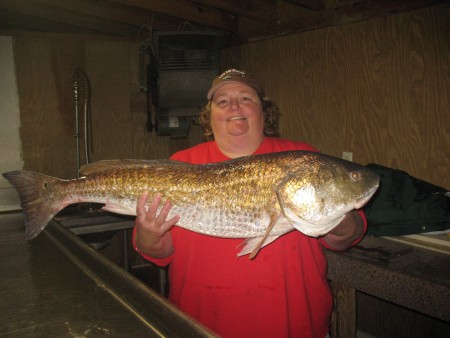 The Carlisles caught these nice bull reds in the surf this evening. They caught 2 yesterday just like them from the boat. 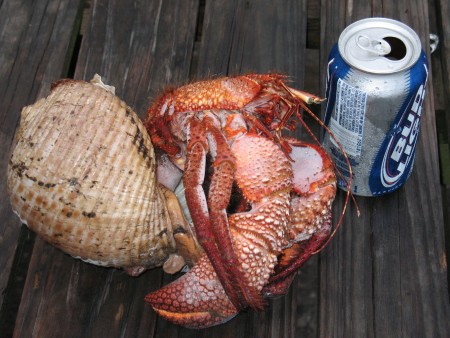 My buddy was given this crab by a shrimper offshore. I am looking to get it mounted for him. Does anyone recomend a good taxidermist? 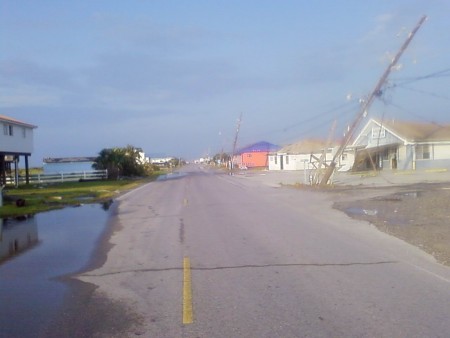 The Cajun tide beach resort made it through the storm with just some minor damage. Just got back Sunday night. The middle of the island did not get sand all over the roads like the ends did. No power for a few weeks more. Lots of poles down. The fishing is going to be great. Saw lots of bait in the surf and lots of fish feeding on them. 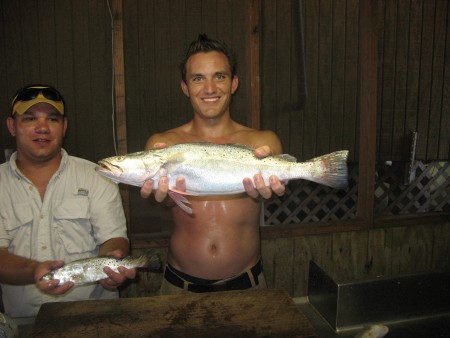 Went fishing yesterday for Robs birthday. The launch was out of live shrimp at 5:30 so we got some croakers. First stop it was just getting light and I saw some big swirls in the surf. Everybody casted out before the boat was stopped and had 4 reels pulling drag out . Bull reds. Rob landed the first one and it was the biggest one. After all that excitment Rob soon hooked the biggest trout of the day. We fished the surf from the boat all morning and had a blast. Most the trout we caught was on plastic. 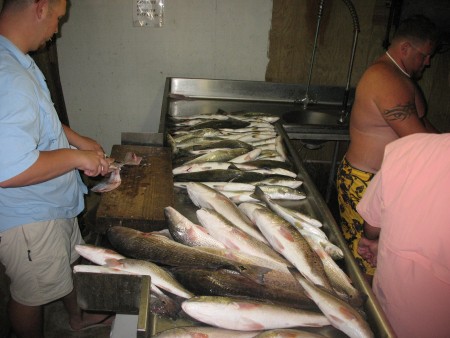 The big trout are steady and the rat reds and bull reds showing up in good numbers. 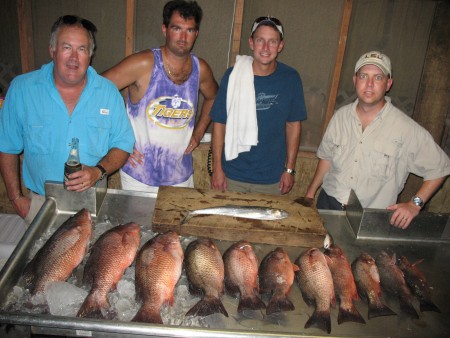 The trout bite was slow yesterday so we ran out to the first rigs to get a few mangroves. 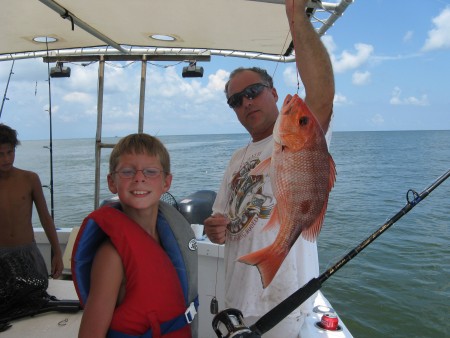 Took the kids fishing today and caught some nice snapper and a big 55lb amberjack. 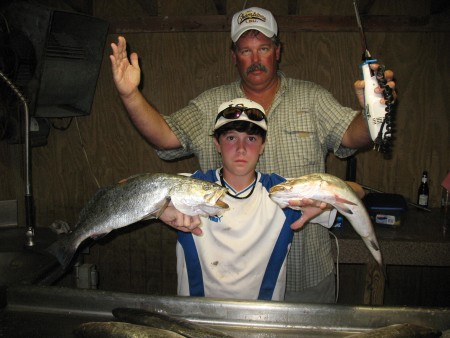 The trout are showing up more and more in the surf as the summer starts heating up. Offshore has been good too. 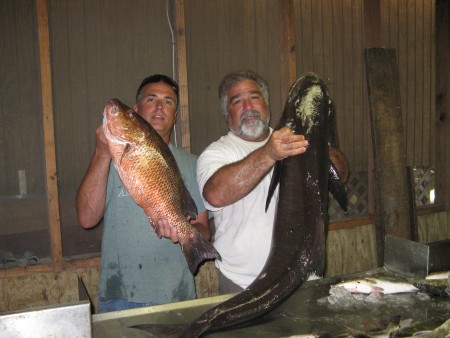 Second day of fishing. No pics of third day. 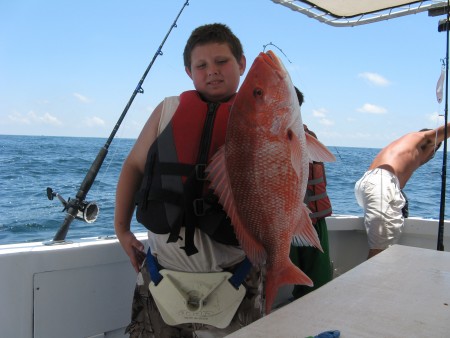 Went fishing Sunday fished the grass line and caught wahoo mai mai lemon fish and snapper at the rigs 4 kids and 4 adults. The kids had a blast. Monday fished the surf and caught some nice mule trout till the tide stopped so we went to the first rigs and caught a 8.68lb mangrove and Fred caught a nice lemon fish on my trout pole. Penn 5500ss on a ugly stick with 17lb test. Went Tuesday and caught limit of some nice snapper and trolled the grass line. 5 hook ups only landed 2 kings. I think I need a bigger frezzer. 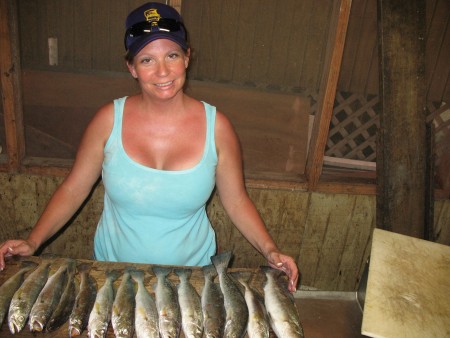 We caught some specks this weekend on live shrimp and live croakers. A few on a top dog. The small ones in Barataria bay and the big ones in the surf. 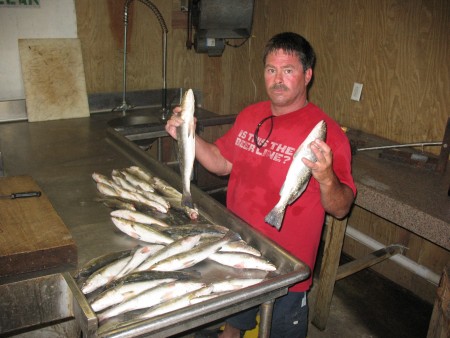 The trout are here for the summer. You can catch them in the surf and in the bay. They will hit just about anything, live or dead. 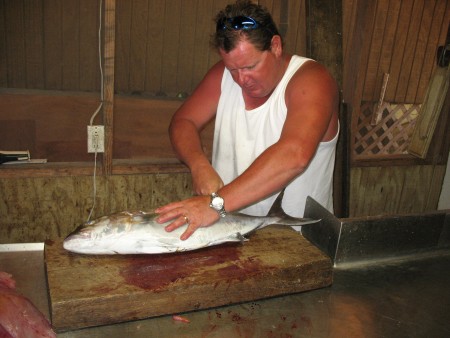 Went offshore yesterday and caught some amberjack. The blue water was about 30 miles out. The water close in was nasty from the river. Be careful out there. I saw lots of big logs and trees floating all over the gulf. Not good to run in the dark right now.

I hate that. We call them spotlight navigators. I always turn my light on my dash down low or off and the gps down low so my eyes can adjust to the dark and see if anything is in my way. If you get hit with a light you are blinded and it takes several minutes to get your sight back.

They are catching plenty of Redfish and specks in the surf off Elmers Island. We have a 55 gal drum of just fish guts we had to dump the last 3 days in a row. You can see them clean fish in our fish cleaning room at Cajun Tide Beach Resort.
To view the cameras go to http://209.62.205.73/webcamera.html user name guest pass word guest and you should see us. Use internet Explorer.

I use my castnet to catch pogies and mullets for bait. But use small perch hooks for croakers and pin fish and catch them the night before you go.

Chop up some green onions and celery. Mix it up with some mayonnaise and mustard and add some Tony chacheres. Boil some eggs and add that too if you like. Let it sit in the fridge for a hour and it tastes great. Its best to use some wood when grilling it to give the tuna a smoked flavor. This also works with amberjack and other leftover grilled fish.

I had a report from a camp owner on the bay. He caught 40 trout off his pier 11am Sat. on a falling tide. He used minnows under a cork. Some trout were over 3 lbs.

October 20, 2014 at 5:22pm
A comment titled: Fishing off the island in response to a report titled: stoneyfish

Try fishing off the side of the road past Elmers island to the west. Early in the morning with top water baits. Big specks.

April 25, 2013 at 8:22pm
A comment titled: I had same problem in response to a report titled: trailer question

November 13, 2011 at 6:42pm
A comment titled: Media Hype in response to a report titled: Thread locked, but discussion can continue

I have customers calling to cancel rooms because they think oil is on the beaches. Maybe there should be a class action suit against the media for all the false info driving customers away from the beaches and from eating Louisiana seafood.

I had a customer go to the bridge last night and saw plenty of trout under the lights. The gulf is calm this morning. Water looks clean now. No oil on the beaches. Its still staying on the east side of the river.
We have had some people cancel reservations because of the oil spill. Its too early to tell if the oil is going to come this way. If it doesnt come. It will be hard to get a reservations.

The new beach is nice on Grand Isle. The gulf is like glass this morning. Dolphins feeding along the surf.
Time to go get them.

I bet they taste pretty good with some green onions and mushrooms over rice. Ive eaten nutria before and its just as good as rabbit if not better. I live on Grand Isle and have watched the coyotes catch rabbits on the beach when the corp wiped out all the grass when they redone the levee. The coyotes are everywere. We trapped one in a hog trap in woodville ms and they are mean as hell. I tried to feed it some steak and it just stared at me. It tried to bite me every chance it got.

January 09, 2010 at 2:27pm
A comment titled: Blood trail in response to a report titled: How did you train a lab to track deer?

I have a black lab and trained him with blood and rewarded him with some scrap deer meat. Start off with feeding him scaps. Every time you defrost some meat save the blood and scraps. Put him so he cant see you and start with a puddle of blood and then drip it less and less as you make a trail. I started training my dog in a small backyard in harahan then down the street in the area then the woods. I had to put a cow bell on him so I could track him.Most labs dont bark when tracking. He is 10 yrs old and only used him twice. He found them quick both times.

My grandfather used to train labs and was a dog trial judge. We used to train at the spillway every weekend. If the dog was to chew up the bird he would rap chicken wire around it and cut the wire and turn it out all around it. It seem to work on most dogs. Females always were easy to train. Some males were untrainable.

October 13, 2009 at 11:12pm
A comment titled: Trash on the beach in response to a report titled: Trashed out Grand Isle State Park

I think the city of GI can solve this problem. Just enforce the litter law and give some $500 tickets to people for littering. It wont take long for the word to get out and some people may think twice. I live on the beach and some people have no respect. The fine should be $500 and 6 hrs community service picking up trash on the beach. As far as the boats and jetskis the coast guard should enforce the law on the water.

I found that any thick sunscreen will keep the knats from bitting. But to keep the sand flies from bitting your ankles every time you hook a fish. Ive used moth balls. You put some in a few socks and put them around your boat in the side compartments.

May 11, 2009 at 4:47pm
A comment titled: fishing the birds in response to a report titled: Nothing but cats and rays

We fished the birds in the bay and caught 12 specks on saturday on live shirmp. Stayed away from the parking lot it was too crowded.

I have a male black lab. I bought the one for stuborn dogs with the 9v battery after he got hit by a car and broke his hip, you put a wire underground in a area. It worked at first but when he saw a cat he ran through it with a yelp. But he would come back through it and yelp again and I would know he was back in the yard. Big dumb male lab. Love him to death.

As long as he doesnt eat the duck before he brings it back. Retreiving a dummy and a duck is differnt to a dog. Try training him with something with feathers on it.

December 06, 2008 at 12:50pm
A comment titled: Beans in response to a report titled: Have you ever heard a deer eating acorns?

Ive seen them eat Honey locust beans. They are around 12inch long and black. They look like they are smoking a cigar. I wish I would have got a picture.

I love to fish and hunt its hard to pick witch one i like best. I enjoy taking people fishing and just watching them catch fish and enjoy themselves.