Guys, with the wind and rain we've had the last few days, do y'all think the Cocodrie area (the bays and out to Timbalier) will be worth fishing this Saturday? Or will it just be muddy and a waste of time? (Not that fishing is ever a waste of time ð)

I will be storing my boat trailer underneath my camp. Does anyone have any suggestions on the best way to raise and secure the trailer 10 feet in the air? Manual winch or electric, etc?

I've never fished Henderson Swamp. The launches that I see when I pass through that area, are they ok for launching a bay boat?

I know this is not an easy questions to answer, but just a rough ball park figure will do. What's roughly the cost to build a 1200 sq/ft camp 12 feet high? Then, what would roughly be the cost to build a 2 stall boat lift/shed?
Any help is greatly appreciated!!!

Does anyone have any experience with the Power Pole Micro Anchor or Micro Spike? Specifically wondering if 2 of them would work on a 22 foot bay boat. Or are they just too small?

I've never saltwater fished anywhere other than the areas around Houma. Looking to branch out. I hear a lot about 'The Rigolets' I know where the Rigolets railroad bridge is, but when people refer to the Rigolets, where exactly are they referring to? Is the Rigolets, Myrtle Grove and Lafitte basically the same thing?

Probably about to buy a used Triton 22 LTS. I'll be using it for just about everything. I want to be able to freshwater fish with it, marsh fish with it and fish some close in rigs on good days. Am I asking to much of the Triton? Seems like it drafts more than most bay boats of comparable size. If you Triton owners could fill me in on your experiences with the boat and the fishability of it, I'd really appreciate it!!

Does anyone have any recommendations for a 'bush-hog' that can be pulled behind a 4 wheeler? I've seen a few but they look more like glorified lawn mowers than bush-hogs. Are some of them able to cut small trees/saplings?

Does anyone have any experience fishing Old River, near Batchelor, LA? Looking at camps there but have never fished it and don't know what the flooding situation is like. Don't want to make a bad investment.

After skiing last week in Colorado and seeing gobs of elk, I'm thinking about doing a public land hunt. Does anyone have any experience with elk hunting public land? Is it worth it or would we be better off using a guide service? Was thinking about hunting land around Pagosa Springs.

Does anyone know if a low oil level on one of a set of twin Yamaha outboards will cause both motors to power down to 1000 to 2000 rpm's max?

I was running yesterday, engines operating like normal when the boat started to loose speed. Then heard alarm. Turned both engines off. Narrowed alarm down to port side motor. Alarm eventually stopped sounding but neither motor would ever throttle to greater than 2000 rpm's. Got back to marina and discovered that the oil level in the port motor was below the 2nd fill line. Both external oil reservoirs were full. Seems odd that one motor would be affected by the oil level of the other.

Anyone know how the system works?

Trying to decide wether to buy a used boat or a new 20' Xpress CC. For anyone who has recently purchased a new Xpress, can you tell me if they negotiate on the price or if it is what it is?

Also, if anyone has the 20' Xpress HD CC, can you tell me what you like/don't like about the boat? The only nock I have against the boat is lack of rod storage but that's no big deal.

Also, what's the best way to rig a leader to keep wahoo from cutting the line/leader?

Any suggestions on a rod for a new Penn Battle 5000? Leaning towards the Ugly Stick Tiger Lite Jigging rod or just a regular Ugly Stick. Will be using it for sight fishing mangroves and casting poppers to tuna, so it needs to be versatile and probably not a broom handle. Thanks!

Wanting to replace my old Doinker stabilizer. Looking at the Sims LimbSaver Modular Stabilizer. Anyone have any experience with this one? Is there another stabilizer that anyone would recommend? Also, I was thinking about adding a string stopper to my bow. Are these worth it or just a gimmick? 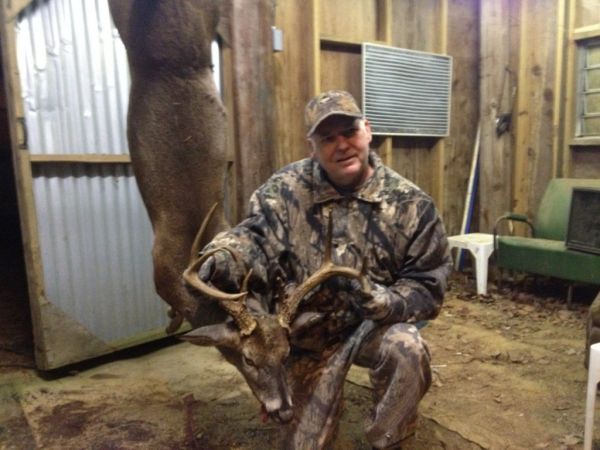 Does anyone have any experience with Ridge Road West Hunting Club in LaSalle Parish. I guess it's around Jena. Looks like they may have membership openings.

Does anyone have any recomendations on iPhone apps that show good weather data and up to date radar info? Would be using this for offshore fishing so it would be nice if I could get some accurate wave data and such.
Thanks!

Do they still rent boats? I heard they stopped that and now you have to bring your own. Looking at their landing I don't know if I'd want to launch a 21' bay boat there.

It may be hard to say, but in general, how often does the river get to 27 feet. I'm asking because I have no idea. I've fished out of Houma all my life and have never had to think about river stages, just tides. :-)

Awesome!! Thanks for the help Captain!!

Yep, I have the silencers you mentioned. Not sure if it's my imagination but it does seem louder than it did a few years ago. I need to have someone shoot it while I'm standing on the side. Maybe it just seems loud to me while I'm shooting.

I feel like the bow is louder than it should be. The stabilizer is fairly old so I was just wondering if a newer model would do a better job. I also think a heavier stabilizer may help balance the bow a little better. String and arrows are new.

MutualFuns has not filled this section yet.