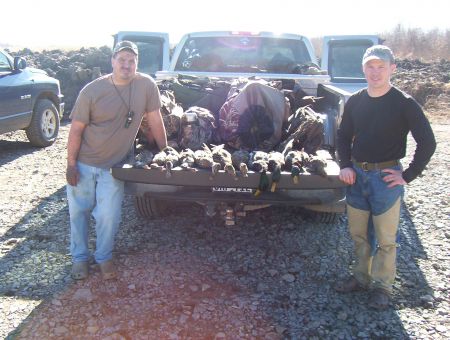 No response in response to a report titled:  Sherburne hunting opportunity 7 Jan

I have been drawn to hunt Sherburne 7 Jaunary and the two guys I hunt with are unavailible. I am looking for 1-2 guys that are familiar with the area and want to hunt that weekend.

What is the deal with them is it legal to have them? Obviously they are, but what is the ettiquette about hunting around them? They are all over Annacoca. They are both public lakes?

November 05, 2011 at 7:31am
Anyone interested in getting into a hunting lease

I know it is late in the year, But I was looking to Get a private lease, and while I was looking there is 1200 acres right next to Fort Polk availible(North East of the Box). Would probably need to get about 8-10 guys and I know it is way late to start messing around with a lease, but wanted to gauge any interest.

Gents some advice needed I have a spanish water Dog, that I was training. Done Ok on some live birds fecthes real well on command. I want to hunt him this year. I've been gona year and he's been really nothing more then a family dog and worse, I fear he's developed a case of gun shyness that he picked up from our other dog.

Is it worth sending him to a trainer for about a month, prior to my return just to get him started again? Is it worth a month with a trainer?

Can anyone recommend a good dog trainer that would take something like this on?

Thanks for the help in advance and thanks to all the hunters who have been filing reports and pictures. It's a little bit of home and it curbs my appetite to kill some birds while we are out here hunting the Taliban. Keep posting reports and keep knockin em down...

Getting back from Afghanistan in OCT and looking for places to duck hunt near Fort Polk.

Is the Dewey WMA any good? Is it crowded if you go during the week?
Any one have suggestions on other places to duck hunt?

August 11, 2011 at 9:41am
A comment titled: No response in response to a report titled: Sherburne hunting opportunity 7 Jan

Sent you an email with no reply....

January 03, 2012 at 8:30am
A comment titled: Sighting in response to a report titled: Permanent stands on Vernon and anacoca lakes

Was out on Vernon in the pm last week and saw couple good groups of teal and some pintail flying around. Haven't been out there in the morning. Planned on going today but went to dewey wma instead. Didnt see too many there either but did see an 8or9 foot gator. Saw some pintail on Annacoca the other day but nothing to brag about.

November 07, 2011 at 6:38pm
A comment titled: Thanks in response to a report titled: Permanent stands on Vernon and anacoca lakes

Thanks I have been scouting Vernon and have a few places to hunt. We went out to Annacoca Friday and found a good spot on the west side near one of the islands. Saw a good group of pintails and a couple of pairs, but no big numbers. We went to the north side of the lake past the channel and there were some great spots however there are a dozen blinds up there.

I would never hunt someone else's blind,without permission, legal or not. But if I get to an area first, and 20 mins before light some dudes come cruising into a permanent blind right next to me, I'll also be pissed. If it is truly public land.

Didn't know they were draining Annacoca, what's the date?

Thanks for the advice

November 07, 2011 at 7:21am
A comment titled: What's the right number of guys on 1200 ACRES? in response to a report titled: Anyone interested in getting into a hunting lease

I own land in Tenn and Missippi and I was thinking 100 per person is plenty, But I've not run a club before and wanted to keep the costs down.

September 19, 2011 at 7:50am
A comment titled: Leesville in response to a report titled: Dog training advice.

I'm at Fort Polk, but in Afghanistan for about another 3 weeks...Been a long year and looking forward to hunting season....

September 19, 2011 at 1:11am
A comment titled: Still working through it in response to a report titled: Anyone interested in getting into a hunting lease

Depending on the number of members between $500-700 bucks. I hadn't really thought about rules, yet or anything yet. I was looking for a private Lease 40-100 Acres and came across this piece, It is right next to the Fort Polk WMA.

September 18, 2011 at 8:35am
A comment titled: Thanks in response to a report titled: Dog training advice.

Thanks for the help to clarify: maybe gunshy is the wrong words, but he has developed a shyness to thunder and lighting and I feel certain he picked up the habit from my other dog.

My dog is a Spanish water dog, not very common in the US, but a dog that is essentially what they bred the Labradoodle to be, Good manners and hypoallergenic. He's been a real good dog and I think with a little work, he will hunt.

I may need to have a professional look at him to get an assessment on if it worth training him though...

September 18, 2011 at 3:16am
A comment titled: Where at in Mississippi? in response to a report titled: Planting Mississippi Plots Timing?

I have some land in MS and my in-laws live in the middle of the State my brother-in-law always puts his food plots in during the last two weeks of Sept, but most of the time he's just throwin rye grass and clover with winter wheat.

September 12, 2011 at 12:06pm
A comment titled: Dewey in response to a report titled: Duck Hunting in Dewey WMA

Corey,
Thanks for the advice, I live on the north side of post, so it actually is a little bit easier to get to Dewey then down towards Lake Charles. Let me know how the scouting goes...I understand the Map Recon, I have been burning up google but nothing is as good as getting out on the ground. I have a boat with an outboard and I don't mind poling my way in either, so I will definitely be out there looking for some spots in OCT. I also applied for a couple of the lottery hunts at Bayou Pierre and Sherburne, but I'm not holding my breathe.

September 12, 2011 at 12:02pm
A comment titled: Hunting from Polk in response to a report titled: Duck Hunting in Dewey WMA

Corey thanks for the advice is it Sabine up in Many or Sabine Island. I asked about Dewey Wills becuase we've driven past it a few times. I'll be off most of November and December, so I won't mind driving alittle bit. I just have no idea where to hunt. Thanks for the help

I appreciate the offer and thank you. I will take you up on it. I've really gotten the itch bad after missing all but a couple of days of Teal last year...It's been a long summer here but football is here and very soon hunting season!!! Thanks alot and hope you guys have a great teal season.