Is fishing edge available for Simrad?

I have an aluminum trailer that needs the wheels and tires replaced. I wet the trailer about 20 times a year in salt water and 20 in fresh. Do you guys think I really need to get galvanized wheels if I plan on replacing the whole assembly every 3-5 years? I have galvanized now and the saltwater has not treated them well as it is so I plan on replacing the whole thing each time. Mainly I'm asking if painted wheels will last 3 or 4 years if they get a little saltwater dips here and there?

Also do you suggest Radial or Bias tires? It is a 20' Nauticstar Fiberglass boat. Single Axle.

Both of my kiddos got picked for the Buckhorn youth lottery. I have heard there is a Bob's campground nearby but cannot find a number for it. Does anyone have that info. I hate to drive all the way from Lafayette just to see if it exists! Thanks.

Is there any other lodging near Buckhorn that anyone knows about?

Does anybody know if there is a website or page to check to see when shrimp can be caught recreationally like with a cast net.

I recently purchased a used boat at Boat Stuf in Slidell and have to say I was very pleased with their customer service. Everyone was very helpful and made the process easy. They were patient and generous. No I don't work for them. One da when I can afford a brand new one I will definitely be back to them.

I was wondering what some consider too many hours on a 2009 Yamaha 115 four stroke used in fresh water only. Fluids changed when they were supposed to be and fleet maintained. Boat seems like a good deal, but hours have me concerned. 1001 on the meter. Thanks all.

I have been taking my family to Rockefeller Refuge to crab and was wondering if there are any places closer to Lafayette. We have a 15' with a 30 hp outboard. We use drop nets. Thanks for any information.

I know the land to the north of I-49 in Henderson is School Board and Indian Bayou. What are the reg.s for hunting the school board property. Licence, permit, times, etc. I have a deer lease in North LA but would like to make some duck hunts close to my home in Lafayette. Thanks for the advice. 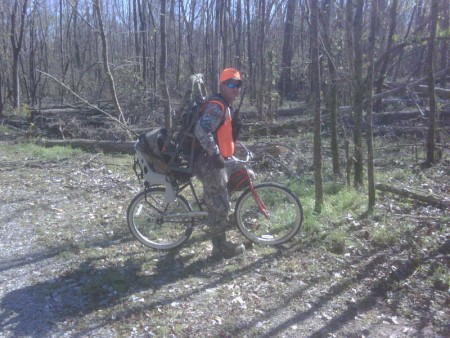 Got invited by a friend to make a hunt on public land. He said it was a good spot but there was a catch. We had to bike it in! 2 miles with a rifle on the front of your neck climbing stand on the back and a bag in the baby seat. Thats right baby seat. Thats the only bike I have is my wifes grocery getter with the seat. It was fun and I did see 5 deer so not a bad outing. If I had been better prepared it would have been an easy ride.

This will probably incite a riot, but what is you guys opinion on cowhorn spikes. Shoot em or pass em.

I am having trouble getting pass thrus with my bow. Its a Parker set to 68 lbs. shooting 270 fps. I shot several hogs last year under 30 yds and not one pass thru. This weekend I shot AT my first deer with a bow and felt like it was a good shot. It was real early and kinda brushy, but I had a pretty clear shot. I never found the arrow or any blood. A little while later, I shot a hog at 40yds. and it stuck him good but only went in about 10 inches or so. He ran off with my arrow sticking out of him. I blood trailed him, but never found him or the arrow. Are my broadheads maybe not sharp enough? I'm feeling frustrated and hate to buy a new bow just because I only use it a few weeks of the year.

Anybody ever try to build a small (2.5-3') fence around their deer feeder to keep the hogs at bay? Something the deer can jump over, but not the hogs?

Friend of mine just brought me some Tuna he caught last night and I was wondering if anybody has any good drecipes on how to prepare it?

Anybody use one of these little Handi Rifles. I'm looking for an inexpensive "spare" to bring along in case I or someone in my camp needs an extra. Any opinions. Obviously I know its not a "300 yd tack driver out the box."

Friday afternoon I was sweating in my stand and noticed a couple deer on two different ends of my food plot just standing in the tree tops. I was wondering what was going on and the the feeder went off and i realized what was on...dinner bell. They wouldn't come within bow range. I have 2 does each raising twins and a third doe raising triplets. I passed on all the yearlings and does, but heard something else coming. i look and 3 hogs are coming. 2 are very nervous to come in and one just comes barreling in and vaccuming up the corn.

NOW THE INTERESTING PART. I draw back and inserted a 100 grain Muzzy immediately behind the shoulder. Oddly, the arrow went in up to the fletching only. She ran to the other side of the feeder and turns aroun to stare at the corn on the ground, AND THEN COMMENCES to eating corn WITH AN ARROW STICKING OUT OF BOTH SIDES OF HER. Ate a few bites and realized that hurt a bit. Ran off and the arrow came out and I looked for that sucker for hours and never found it.

I had hand surgery a couple of weeks ago and finally have enough strength to hold my bow. Only problem is that it hurts like all get out when I pull back. I shoot right handed and had surgery on my left hand, so when I draw, my left hand pushes sgainst the handle real hard and it hurts pretty bad. If I had to draw back on a deer I could definitely take the air out of him, I just want to practice and it hurts kinda bad. Any suggestions on how to cushion the handle without making something get in the way? Do they make cushioned handles? Can I coona$$ engineer something? Thanks for the advice

Anybody made a trough to feed deer out of. kinda like a cattle feeder with a small roof over it. How was the success. Did the hogs destroy it? Should I build a 4' fence around it?

Anybody found a way to rig an inline switch to shut off the headllight on a foreman 500. I'm tired of duct taping it because it blinds you when you put anything on the front rack.

Anybody using a 270 WSM. I'm thinking of getting one next year and was hoping to get some pro's & cons. I now shoot a 270, but occasionally shoot, or would like to, 300+ yds. and also once a year or so go up north for elk or that sort.

Anybody know where to find the rut calendar that was printed in the last LA Sportsman.

I too am very interested in the responses here. It is just me and my two kids who are dying to go fishing. They sat on the boat in the shop today listening to the radio. We live together so 6' is not the issue. I just don't want to be 'that guy' who is saying the hell with it and cruising down the thruway to the launch. I cannot find anywhere where is is saying you can or you can't. I feel it can't hurt as the truck and the boat are both gassed up and I don't need to stop. On the fence here. But wanna fish. It may well be better for the kids to be out and much easier on my pantry. By Friday I suspect they will start eating the sheetrock in my house. Teenagers never stop eating.

March 23 at 9:19pm
A comment titled: Re: Simrad in response to a report titled: Simrad

Glenmora is a long way from Catahoula parish deer wise. I'm not sure about that area.

I hunt Area 2 and our rut is always about 2nd week of Nov. This weekend I saw a doe and fawn and the fawn looked 30lbs and was covered in spots. Couldn't have been but a couple weeks old. I saw lots of other yearlings and the button bucks are pushing 70lbs. We had a lot of flooding last year and there seems to be alot of things different around our place.

Did great. Both of my kids killed deer. One missed another also. There were 10 kids and 8 killed deer and a ninth one missed...twice. 9 out of 10 shot I'd say that's great!

Nice post...sorry about the phone

Don't underestimate that girl..she is a chick who knows her stuff. Teleflex has the best customer service I have ever seen.

Well I found out the deal did not include a trailer so it was a deal breaker at the price asked. I ended up buying a Nauticstar and am pleased. Thanks again all for the help.

Tkanks for all the comments guys.

March 10, 2015 at 11:42am
A comment titled: Woohoo congrats mandy in response to a report titled: Tripod

Awesome deer for one of the most dedicated hunters I know. This deer couldn't have fallen in front of a better hunter. So proud of you Mandy.

Don't let him fool you, it was a really nice buck. Glad we could baptize my Big Red with some Buck Blood!

SHOOT SOME DOES! Feed the does with a key mineral they need....lead. What reason does a buck have to move around when he can breed 6 does within 100 yds? I had the same problem when I started where I'm at now and after 5 years of knocking the does down, we are seeing more and more and better bucks.

December 27, 2009 at 5:40pm
A comment titled: Thanks in response to a report titled: Where to duck hunt in Henderson

Thans alot fellas. I appreciate the insight. The blinds I assume are for someone, and they would make crawfish bait with you if you hunt it....even though its public.

December 27, 2009 at 4:55pm
A comment titled: permit in response to a report titled: Where to duck hunt in Henderson

I will carry my wma permit anyway, but you DO have to have an Indian Bayou Permit also. I asked the fellar at Indian Bayou. Do you need a permit to hunt the school board property???

December 27, 2009 at 10:18am
A comment titled: where in response to a report titled: Where to duck hunt in Henderson

Isn't there a bunch of School Board Property? What are the regs on that

December 25, 2009 at 10:12am
A comment titled: bump in response to a report titled: Where to duck hunt in Henderson

December 24, 2009 at 4:08pm
A comment titled: WOW in response to a report titled: hog hunting regulations

LOL Thats hilarious. You can hunt hogs year round on private land with any legal weapon with no limit. You must observe legal shooting times. I still am amazed you killed that big thing with a .22. You oughta kick your FIL for almost getting you killed. I often shoot them with a .270 and have to shoot em several times and track them a while. I'm assuming you shot him in the ear region?

Louisiana Armory has not filled this section yet.