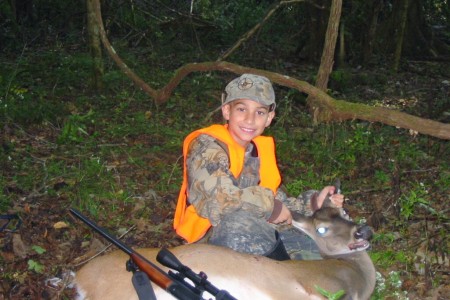 Here's a pic of my oldest son's age 9 first deer. What a blast this hunt was. I don't know who was more excited my son or me....

Andy: Copied from LDWF web page under deer hunting regulations: B) A legal buck is a deer with visible antler of hardened bony material, broken naturally through the skin. Killing bucks without at least one visible antler as described above and killing does is prohibited EXCEPT where specifically allowed and EXCEPT in West Baton Rouge Parish, Pointe Coupee Parish, that portion of Iberville Parish west of the Mississippi River including the Sherburne Wildlife Management Area and those private lands which are totally surrounded by the Sherburne Complex where a legal buck shall be defined as a deer with at least 6 points or a deer with both spikes 3 inches long or less. To be counted as a point, a projection must be at least one inch long and its length must exceed the length of its base. The beam tip is counted as a point but not measured as a point

Andy: You are correct-shot placement is the most important, but how many eight year olds can make a perfect shot on their first deer? Even with a good bit of practice at the range an eight year old will experience buck fever, that is why I want to give my son every advantage I can in that predicament. I think the larger caliber gives him a slight advantage by allowing him to make a not so perfect shot and still recover his first deer.

Darin: I have researchedthis topic as I have a son that will be eight in Feb.-I am leaning towards the 7mm-08. It has similar recoil as the .243 but has the same amount of knock down as a 30-06 at 300 yards. Very flat shooting gun with little recoil. I know that many people believe that the .243 is the caliber of choice for many young hunters but I have seen too many deer hit with a good placed shot that have run off and never found. The problem is the .243 does not have enough knock down power and leaves a small exit hole, thus making tracking difficult.The 7mm-08 is a necked down .308-I have several friends who have kids that shoot 7mm-08-not one deer lost. I think H&R makes a crack barrel that is tapped for scope mounts. I am wanting to get a crack barrel for two reasons; safety and to teach him that to make the first shot count.

My son is 9. he is lanky and tall weighs abot 60 lbs and shot his first deer this year with the H&R combo 7mm-08. I also purchased a limb saver recoil pad and removed the original recoil pad to prevent the stock from being too long. He has no problems with recoil. I think the guns kicks about like a 20 ga. Great caliber gun but shoot the nosler parttion bullets. stay away from the balistic tips i have heard a few horror stories regarding ballistic tips.

My brother was hunting in Morganza a couple of weeks ago and captured 2 black bears on video, send me an email adress and i can forward the footage.

john has not filled this section yet.