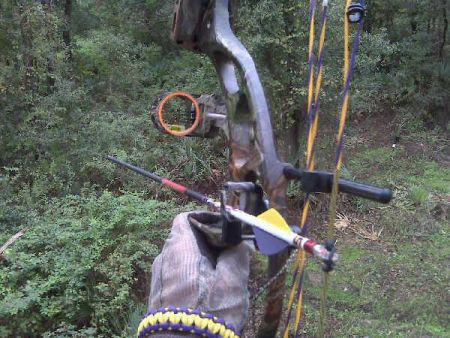 Anyone else on here put in for the lottery hunts on the state parks for the bow opener? I got picked for Big Cypress State park Oct. 2nd-4th ... will be doing a lot of scouting when I get in from offshore, fill pretty lucky as they only drew two hunters for that particular weekend

Going out on a limb here but if you or if you know of someone that forgot their boots and waders at the car wash in Port Barre email me I have them...I pulled in today and they were left there so I put them in my truck and waited a while after I washed my truck to see if anyone returned so tomorrowI will contact the owner of the car wash in case someone returns to look for them...

Hey man were you at the game holding up a "flys it dies" sign?

My sons got picked for the youth hunt at Dewey Wills on Dec. 12 and 13th, just wondering what to expect,..Do I need to bring my 4 wheeler, can we camp there? big stands? Anyone been there on a youth hunt before? Thanks for any information 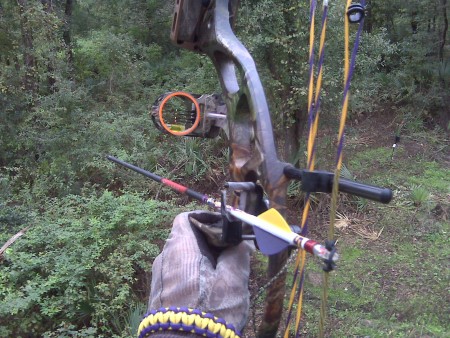 ..I took this picture of my bow from the stand yesterday..Jay at Advanced Hunting in Opelousas did the strings,Wrist strap was done by a guy on ArcheryTalk.com but now Jay does them also, the LSU arrow wraps came from onestringer.com,... Also attached the picture of the hog that I am waiting on, what yall think he weighs?

Does anyone know what type of grass seed the state plants on the side of the road? I noticed going to Baton Rouge about three weeks ago they were spraying the seed from a truck on the new pipe line and yesterday I passed and the grass is thick, even growing on the blacktop, I have been trying to plant grass at my house for four years now and have yet to get any grass to grow in my "shady spots" in the back yard I have tried all types from home depot and or lowes, even tried to transplant..nuttin any suggestions?????...ohh rye grass does well in my yard

My son is turning 11 next week and wants to go on a
"deep sea fishing trip" is there an age limit that guides restrict on their boats? If not can any one recommend a good guide for a tuna trip?

Took the wife to Lil Alabama today in Sherburne..The lilly's are taking over the back,water is a lil high and only caught 5 little bream,no bass ....oh yea and got stung in the head by a wasp getting her worm out a tree lol

Just wondering if any of you or if you know someone who installed some "torsion keys" on your truck to lift the font end? any pros and cons?
Thanks

I am trying to look at the river stage for the atchafalaya but the weather link at the top of this page is not opening for me, is it my copmuter or is somthing wrong with the link?

Just wondering how many of you ever fish the "cleco lake" and if you have any pointers for a first timer, I plan on making a trip up there when I get in from offshore, My buddy is working a turn around at the plant and said he has been seeing a few good stringers come off the lake....Thanks>>>>-----> TC 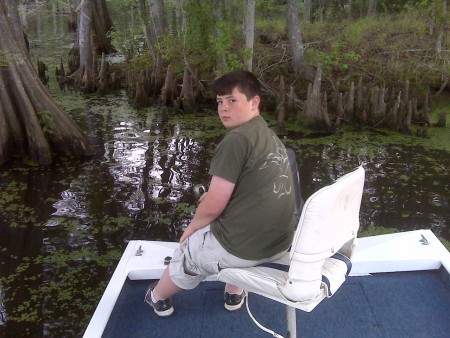 Made a trip to Chicot, a alot of grass/duckwead at south landing,launched at daylight and headed north, the duckwead cleared up pretty good but only caught two lil bream. .fished with crickets, worms and jigs, noticed a sign on window at gate that the boat landing was going to be closed for a few days so if you plan on going call and make sure landing is back open...now for the truck....we were heading home on Hwy. 190 and a spare tire falls out the sky!yeap a guy was pullin a trailer and his spare tire was mounted to the side of his trailer the weld holding the bracket broke, the tire hit the ground and flew at least 50'in the air and came down on my truck, I was on a bridge so I could't hit the shoulder to avoid it, might have been a good thing cause I think if I would have taken the median my boat would have flipped, I am just glad it didnt hit my windshield..so you guys that don't have insurance on you boat, just think about it....you never know what can happen. The guy did stop we exchanged insuracnce information and now my truck is in the shop undergoing a $4,500.00 face lift... 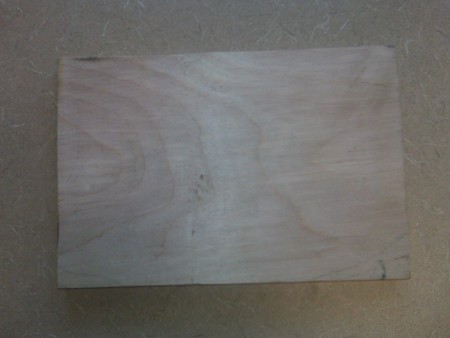 Just Killin Time While Offshore with nothing to do. what you think???.No the fish are not biting out here Jason..lol 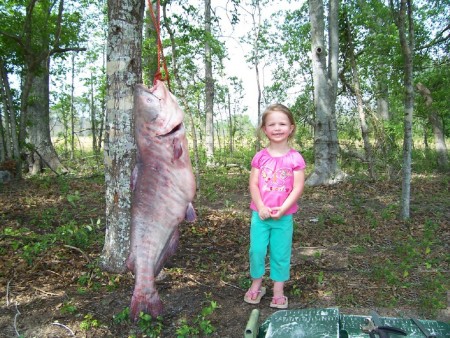 It has been about two years since we went snagging at the hydro plant in Simmsport. A buddy of mine told me there is a fence at the locks now, does anyone know if you can still get to the water? In the past there was a "do not pass this point" sign and of course the closer to the locks we could get the more action we would have. Now before anyone starts,yes the law was changed recently to allow you to keep a spoonbill (or two, not really sure) but, only if you snag one while fishing not if you are "snagging" makes no sense to me. Whats your thoughts on this????????? 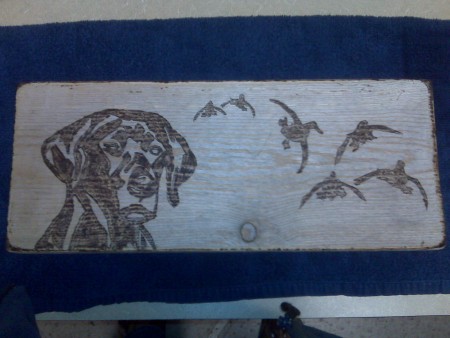 Jason, this is the new wood burning project I am working on, I sent it to you a few times by E-mail, call me at he rig.

check out the big buck on the west texas cam
http://www.watchthedeer.com/photos_live.shtml 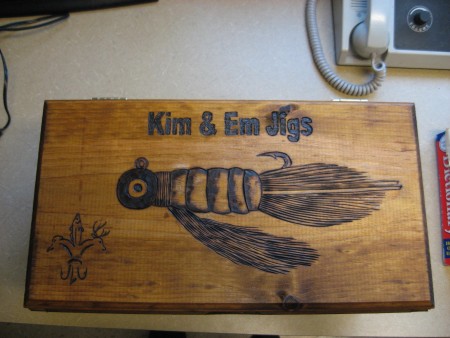 I bought a lil cheap box from wal-mart and did some wood burning on it then polyurethaned it to bring it out, how do yall think it came out?

it deosn't mttaer in waht oredr the ltteers in a wrod are, the olny iprmoatnt tihng is taht the frist and lsat ltteer be in the rghit pclae. The rset can be a taotl mses and you can sitll raed it wouthit a porbelm.

Sherburne WMA is loaded, you can hunt them with whatever weapon is legal for the season that is currently open, go ride around and you will see rooting all over the place, it seems that they are moving back to the north end this year.. go walk the nature trail with a 22 or 17 anytime after Oct. 7th and you should pop one or two, just watch out for bow hunters.. if you see a vehicle go somewhere else lol

Awesome what you guys do for/with the vets!! If I am ever on your end I will definitely give you a call.

Yea they have sacalait but they are hard to find, but when you do find em you can catch a limit

Gotcha... 2 'o'clock is a good lil place to start on that end, also you have half moon which is east of 2 o'clock

anywhere you purchase a license you can get a wma tag

YES, just bring youth with their SS# to pick up tags wherever you purchase yours at.

Bent creek is a good place, I went a few years ago and may be back soon.. try to go in January to catch the rut there, he has two places, a 'trophy' area and a buck of choice area, basically any buck you kill on the trophy side is an extra 7-800 bucks.. but honestly we all killed our big bucks on the regular side.. the
'non trophy area'... great group of folks

October 16, 2015 at 5:10am
A comment titled: Just jealous in response to a report titled: Wisconsin Bow Kill

Don't knock if till you try it.. Rifle hunting a ranch is easy.. Bow hunting not so simple, you still need to play the wind and make your shot count.. Any one of y'all would not turn down a hunt like this if it were 'given' to you would you? And if you say you would not go, you are full of it!!!

Call chad, he does awesome work

December 16, 2012 at 7:33pm
A comment titled: good catch in response to a report titled: Spillway back on fire

This thread is the reason alot of people leave this site,first the deer are either too small,young,old skinny,fat,killed in a fence or what ever they want to bitch about,and now the fish, come on people give it a rest......I just want to say congratulations on a good catch, cant wait to get in and give em a shot myself..... oh and I stock pile on popcorn and budlight when ole 'Widowmaker' post his hundreds of doe kills on here every year lol..Congratulations on your catch man

October 18, 2011 at 5:43am
A comment titled: drought in response to a report titled: Messed up racks

Think it was the drought this past year could have something to do with it? I have noticed the same thing on our lease

Dont forget about the wrist slings to. Jay started doing them as well..