gun and amo in response to a report titled:  ALLISONS FIRST DEER

the big boys are jumping in the boat 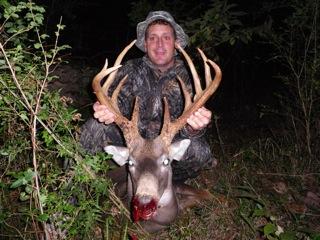 Made about 15 hunts;no deer just had to keep on trying. U can't get him at the house. I was just trying to get a doe.Meat in the pot.Saw a small deer to my left looking behind me at somthing was to small to shoot but acting funny.I looked to see hopeing a big doe..BIG BOY He walked up behind me 15 yards, no way to make the shot.Please lord don't let him wind me.He just keep on walking to my left.He stopped at 15 yd he never made a sound. If I wouldn't have seen him first I was busted but he didn't.It was ment to be. All i could think about was get the pin on him.This is the one I been dreaming about since I started bow hunting.When everyone had there guns I had my bow.They said i was crazy, but I wanted to get a buck that I could mount with my bow.And just look what I got.Haven't sleep in two days. Whos crazy now JUST THINK IF I WOULD HAVE SHOT THE LITTLE ONE I AM GLAD I DIDN'T

15 hunts no deer but not today.You got to go to get him.Check this bad boy out.One of a life time.U just never know.So get up and get out there.I did when they said i was crazzzzzy 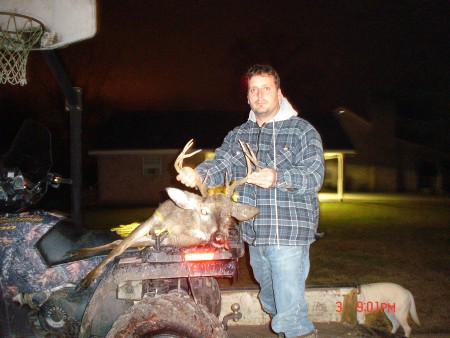 I have tried T69 to codeblue and more. Never had much luck with scents.Until yesterday 1-3-07. I put out two cotton balls of southern whitetail hyper heat and I broke out the horns.Started soft rattle at 4:00 for 1 min got a little louder at 5:00 about 5:10 this buck come out of three feet of water{we are flooded to} between both cotton balls with his noise up headed streight to one of the balls ONE SHOT AND DROP. I all came together this time About this scent had it in the outside icebox since last year 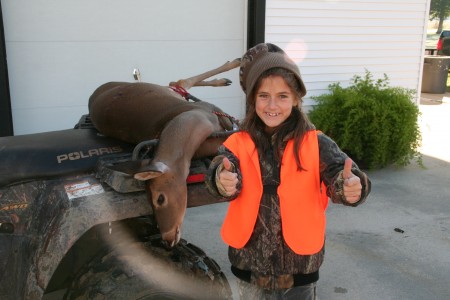 Allison made daddy proud on saterday.It was about an 80 yard shot.One shot and drop.First deer

October 30, 2006 at 8:25pm
A comment titled: gun and amo in response to a report titled: ALLISONS FIRST DEER

24604edd has not filled this section yet.