self defense in response to a report titled:  R.Y. Black Bear stalks me and son while hunting: 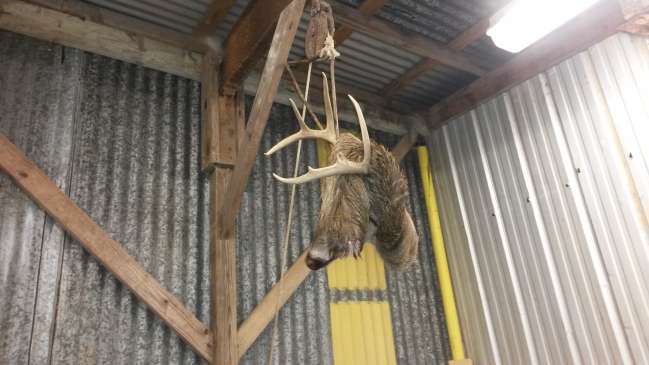 It's been a while since i posted, but i figured i'd put up my kills from the 2015/2016 season at my camp in Bama. After years of hard work, and culling out some bad genetics, i am finally killing some decent deer on the property. A good 9, a decent young 8, and a really old/tall 7point i had never seen, that bottomed out our 200lb scale.

Having some missfire issues with my motor, Found my current spark plugs have worn down to bigger than a 40gap so i bought some new ones. Problem is i don't have the manual for the motor and my google searches are coming up empty.

Was wondering if anyone knows what the proper spark plug gap is for a 1997-2002 Mercury/Mariner EFI 225 2stroke saltwater series? 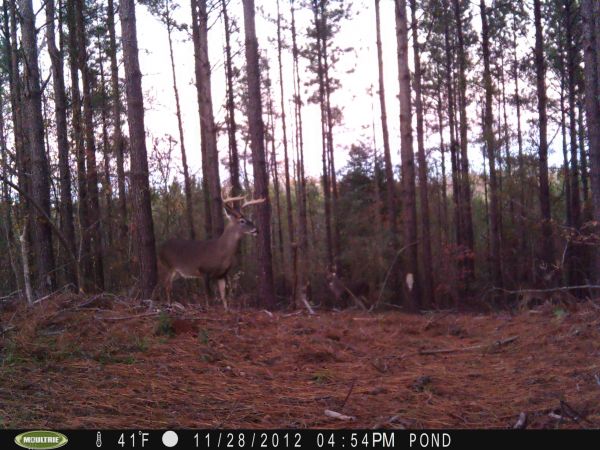 Well as we approach the final month of the season, i am still chasing these bucks, but hopefully we get an early rut in my area of bama so i can catch one of them chasing a doe. But i rather doubt it, and once again the fact that our season ends before the rut truely gets into full swing will screw me.. 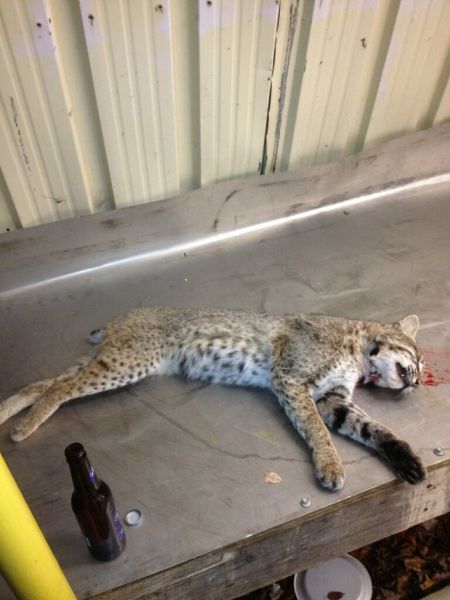 So me and a cousin went up to the camp in alabama thanksgiving night. It was a good weekend all and all, we shot several does for meat, saw lots of game, and then..... In all the years i have sat in the woods, i have never witnessed a bobcat actively following a deer......until now. Saturday evening i had a doe with a very small fawn come across the trail i was hunting, feeding on acorns under the white oaks as they went. a few minutes after walking out of sight, i hear a noise to my left. Low and behold, its the largest bobcat i have ever seen in the woods, half squatted to the ground trailing my poor little fawn. Needless to say i shot her and dropped her off at the taxidermist yesterday. 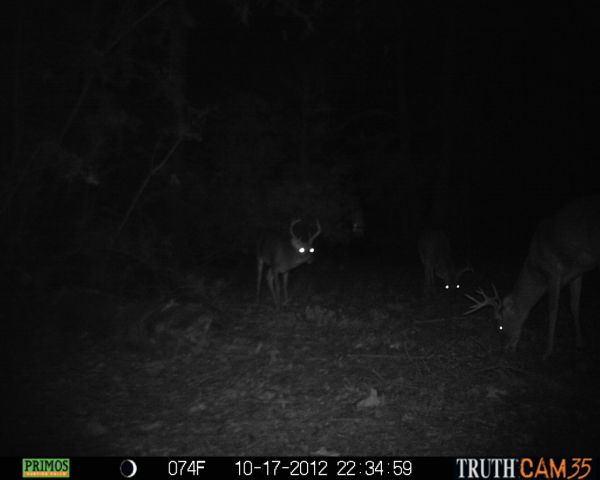 Picked up the trail camera in my yard this morning, i've been watching these little bucks eat the leaves on my blueberry bushes for months. Now i have some pics to see what they look like up close.
I think one may have been killed by an illegal gun hunter, as i heard a gunshot friday evening and one of the bucks did not show on the cam friday or sat night. 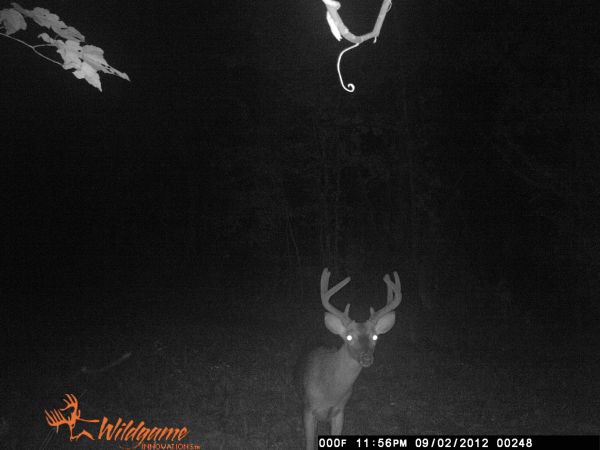 So a while back, i made a comment in one of the herd management threads, and a few of you guys were asking if what i was doing was working or not. (not sure of who but i know one was Hunt R) Well here are some early results. Having just picked up my cameras for the first time since July, I did get a few pictures of velveted bucks over my Soy Beans before the batteries killed completely. On top of what appears to still be a fair amount of *meat* bucks (screwed up racks), i did see some improving signs with this big 8pt and what i believe is a very young 10pt *can't see his right antler*. You guys judge:

I am looking for any information on maybe finding someone who would be selling any pure breed Llewellin Setters, within driving distance of Mandeville. I used to see them in the paper every now and then but it's been a while since i last saw any. I've had several of these dogs before, and they are excellent pets and even better bird dogs.

I have tried the purchasing them from up north option and having them shipped, and i DO NOT like it. Will never do that again.

July 09, 2012 at 1:18pm
A comment titled: self defense in response to a report titled: R.Y. Black Bear stalks me and son while hunting:

According to the warden in Tensas nwr....you have to be pretty well mangled for self defense to be viable....

October 19, 2014 at 2:28am
A comment titled: sharks in the lake in response to a report titled: Black tip shark

Just my $.02, but over the years i have caught several 6 an 7ft sharks in lake Pontchartrain. Both blacktips and bulls, and even some large sand sharks.

I dunno why people still see sharks in the lake and think its unusual...

Grats bro! Thats one hell of a deer, especially for St Tammany!

January 05, 2014 at 1:56am
A comment titled: well in response to a report titled: weight estimate

Its hard to say without seeing it in person. What i gave you is a roughly educated guess based on a picture. To be honest, pigs can be fairly tough to guess the weight of. We killed 2 in Alabama this past weekend that were about 110-120lbs each and they looked about the same size as those but then again i am looking at a picture.

If the pig was still standing up i could be a lot more precise.

December 15, 2013 at 7:26pm
A comment titled: nah in response to a report titled: weight estimate

Based on the length of the pig compared to your gun, and the fact that we killed 2 about the same size this past weekend. I'd say about 100-120

Rest in Peace. The world has lost another great soul. Frank was a great person and a even better friends. He will be missed.

Very interesting conversation piece once he's on the wall tho :)

I dunno where people get this story about having to cut the nuts off or it will taste bad from. I have killed several 500 pounders and they all tasted great without ever cutting or *bleeding* them.

I have hunted the first draw hunted for 14 years and honestly i would be far more worried about copperheads than the rattlers. But like most said, by december, even if its warm enough for them to be active they will be so discombobulated you will be fine.

November 14, 2013 at 9:16pm
A comment titled: common in response to a report titled: Leatherjacket fish BEWARE

I've seen these a lot. I can remember as a kid, catching little ones by the hundreds in the surf off grand isle, while throwing the cast net for pogies. I know your pain, and they can get to be really annoying.....also they make terrible bait...

Thanks guys, much appreciated.

Take it from a video game programmer.....It happens, no matter how hard you try, its inevitable. The question is more of, how well prepared are you for when it does happen.

Ya, i got the same info from my McAfee when it blocked the site. I must agree about the server budget because all the data i can find on the virus is that its OLD, and yet somehow this site and prolly 50% of its visitors got caught by it....

Hooray for having WAY more virus/hacker protection than i need. well at least more than i need for this computer.

Yea, that's the story of my life when i fish the causeway now.....part of the reason i only made a couple trips in the lake last year...

And hell, one day a few years back, i was in black bay. This guy fishing on the other side of (what's left of the black tank) gets tired watching me catch fish. So without saying a word he pulls up anchor and comes around and drops anchor less than 10ft from me, and has the nerve to get mouthy when i tell him something......

Some people should not own boats, we need a way to screen out the tards.

I forgot to mention if you needed anything else, to email me. More than willing to help out.

I'm so glad i have you guys to entertain me while my boat is out of commision.....

Its at the end of Jackson St. and no there is no bait. It's strictly a free public backdown launch, but its BY FAR the shortest run to the bridge.

If you are on hwy 190 (also known as florida st.) coming from mandeville, Jackson st. is the 6th or 7th street on the right AFTER you pass the hwy 59 intersection. Its also the point where 190 goes from 4 lanes, down to 2. Turn there and go all the way down, until you see a baseball field on your right, the boat launch is directly across the street, with a small parking lot next to it. You will also see where others park when the lot is full, so don't be bashful on your parking spot, just be SMART please :)

If you want shrimp, you will have to go down to lacombe. Bayou Adventures behind LLoyds has them now *yes for those who don't know they started getting them in yesterday*. $.45 under 100 and $.40 over 100.

If you goto lacombe, you can go down lake road and use the public launch there if you want, its just a longer boat ride to the bridge.

Best choice is Mandeville harbor, but beware its a parking nightmare, so get there EARLY.
Madisonville is still out of commission i hear, so your only other decent choice would be Lake road in Lacombe. But mandeville best choice by far.

There's the google maps link. If its showing it off a bit, scroll south toward the lake and you will see the food icon with the name next to it right before the lake.

Not to be rude but i have had this issue personally at my own home here IN louisiana and i was told by multiple sheriff officers after repeated calls, that if the animal DOES NOT have a collar and the owner does not contain them after being warned. That it up to the landowners descretion what happens to them. Luckily for them, each time it happened to us, the owners picked up their animals, but it IS NOT illegal to *remove for lack of more grotesk words* NON-COLLARD animals from your property.

It is probably not the most human solution to the problem but honestly after having several dogs stolen or killed on my own property...i don't really care about the humanity of it.

SamuGames has not filled this section yet.