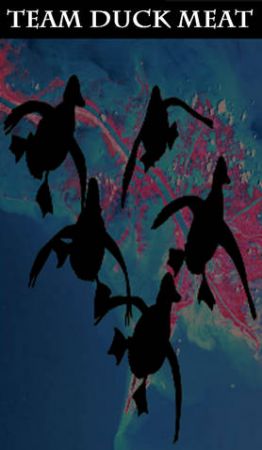 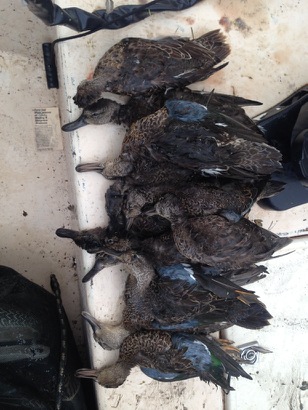 Had some great hunts this weekend and boy was it fun to be back!! Had an 8 man crew and hunted some public land In SE LA. Me and a buddy had our 12 by 7am and the rest of the crew finished up shortly after. Great to be back in the blind! Hope everyone had a safe opener! 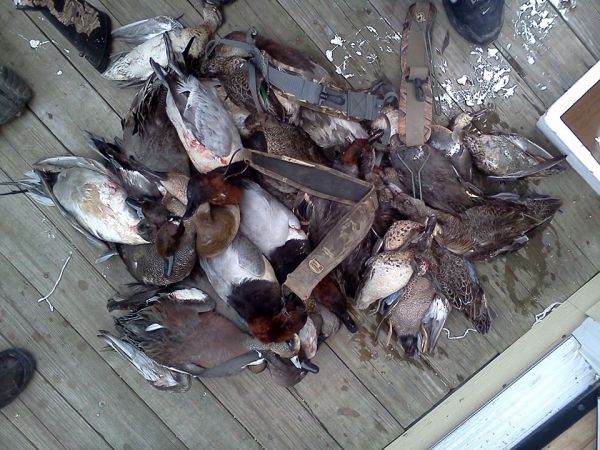 TeamDuckMeat at it again, another slay and filet boys! 6 guys and 70 ducks on the weekend. 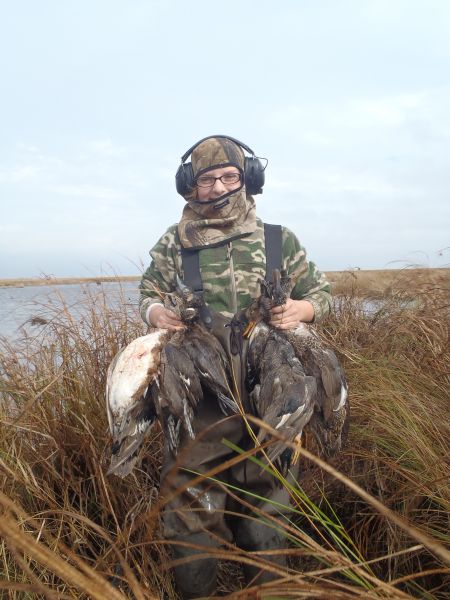 Scouted a new area on Friday and found a good concentration of Ducks. It was just me and my daughter this weekend so I wanted to make sure it was a good hunt. Fog was thick in the morning so we took our time in the boat and were set up just in time. Once the fog cleared the grey ducks dive bombed in and we finished up by 930. 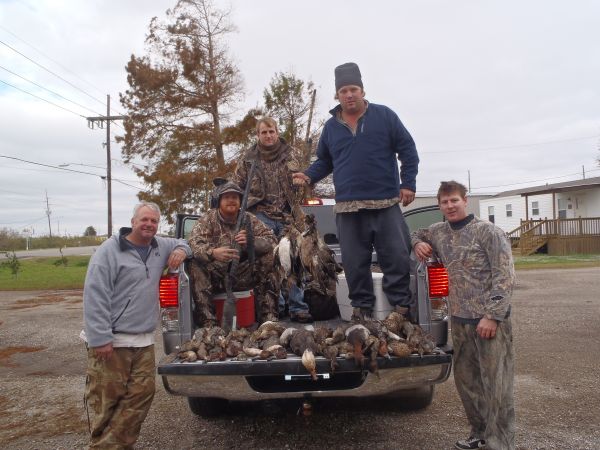 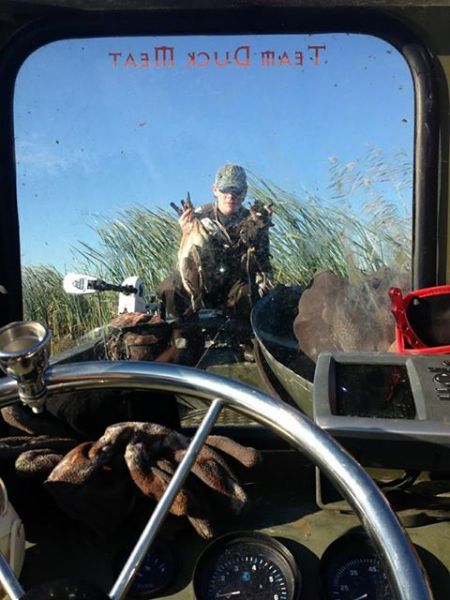 TeamDuckMeat was at it again this weekend on Public land and a little scouting put limits in the boat. The big ducks just about disappeared but the Teal came in droves and it was easy shooting as flocks of 30 to 40 lit in the decoys. We waited on Big ducks as long as we could but they were few and far between. Sometimes ya gotta slay!

Saturday was a 4 man limit(2blinds)consisting of 3 Pintail, 1 spoonie and 20 teal(just about half and half of Bluewing and Green) 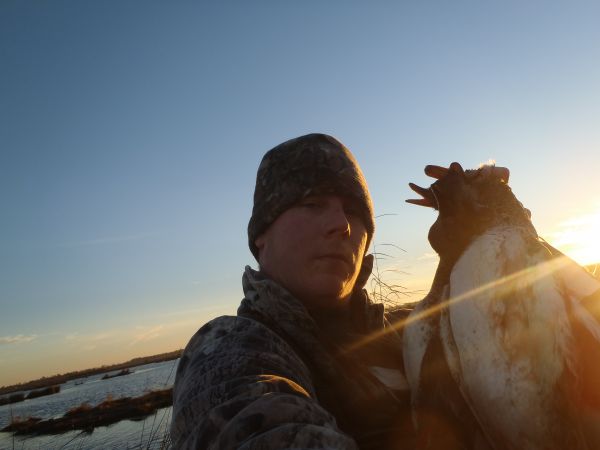 ewwwee boys it was a morning to remember today! Big spread combined with a homemade jerk cord had the Greys in my face. Solo Limit of 6 greys by 630am.

Changed up the scenery a bit but the outcome still the same. Me and my Daughter with more Public Land Limits! They are here boys, go get you some! 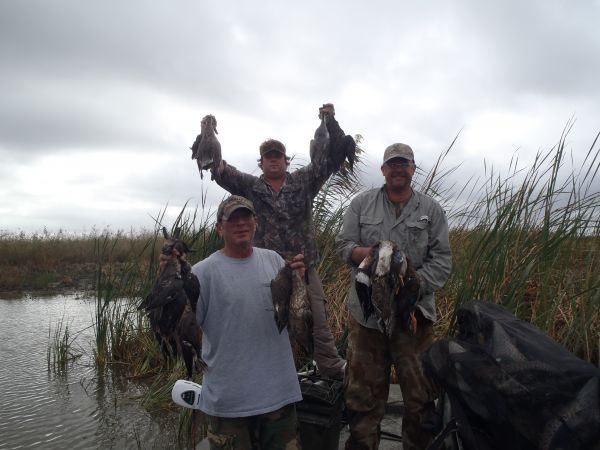 Had 7 guys on Saturday(2 blinds) and finished off a limit by 645 and the other blind finished at 8. Pintail, Greys, Wigeon, Teal and Spoonies.

Sunday had 6 guys and finished a limit quickly after setting up. Had to let the fog clear some before we left the dock but it wasnt enough to save the ducks from TeamDuckMeat.
Pintail, Greys, Teal, couple Spoonies and a Redhead

Looking forward to the East opener and bringing terror to some new Public Land Ducks! 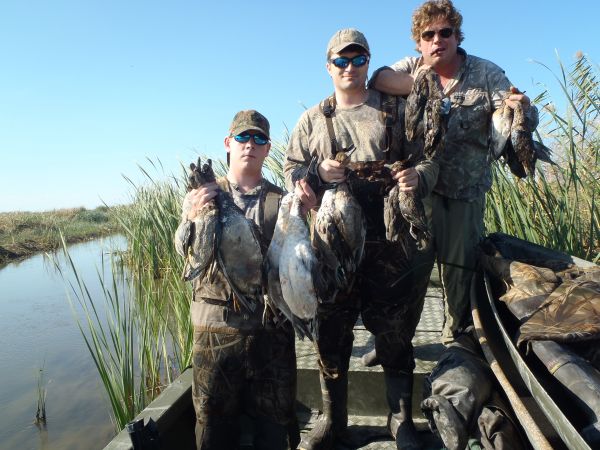 Killed a Banded Pintail on Saturday. Hunting should only get better!

Hey guys. Just finished this video in time for the opener. All footage was shot on public land in SELA. Hope everyone has a great opener and enjoy! 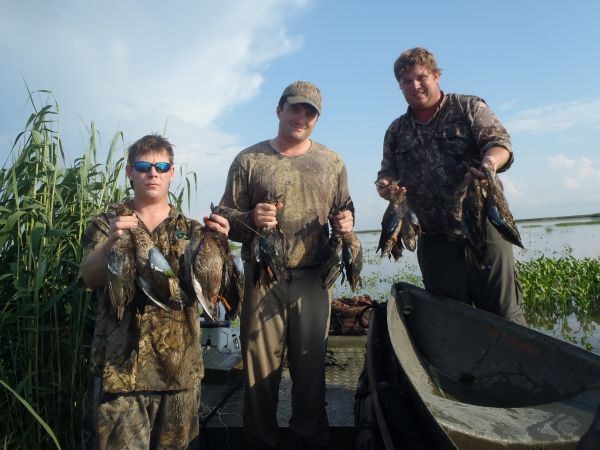 Hunted hard this weekend on public land and it paid off. TeamDuckMeat had a 8 man limit (3 blinds) by 8am on Saturday and 2 blinds limited out Sunday by 9am. Other blind quit early and took home 6 birds. Overall it was a great weekend with 78 Teal Killed, hoping it only gets better. 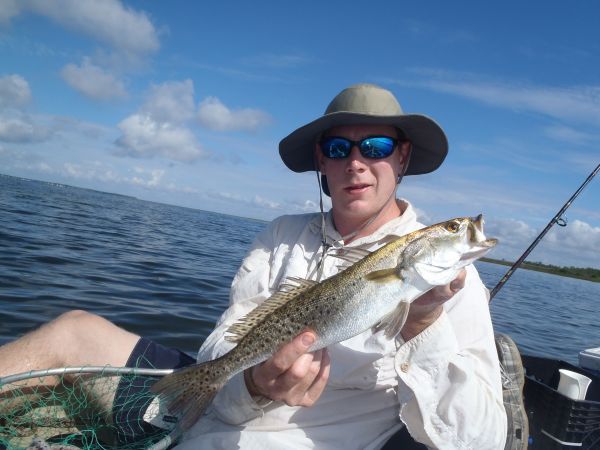 Was hoping to get into the gulf for some Snapper and Kings while I was in town but the weather didnt permit.

Decided to hit the Choctawhatchee Bay instead and fished some grass flats along the marsh in Hogtown Bayou.

First day I caught 7 specks with only 3 keepers and a couple hardheads.

I fished the incoming tide with TKO Shrimp and Gulp under a popping cork. All fish were caught in 5-6 feet of water over the grass. Tons of Mullet and baitfish around.

Heading back to Pensacola in a couple weeks to get offshore. 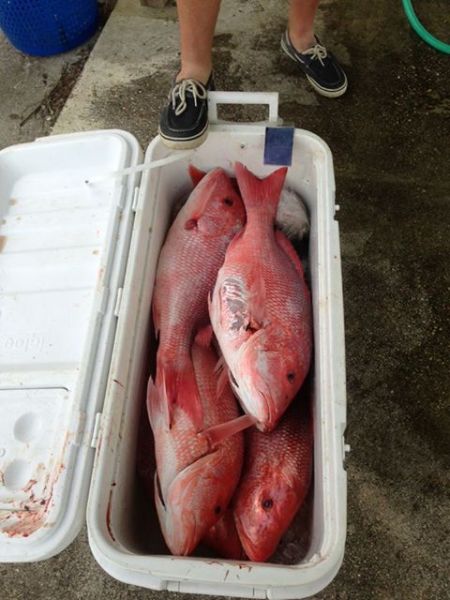 TeamDuckMeat was in Venice and Hopedale this morning putting a hurting on the fish. One boat was fishing out of Venice limiting out on Red Snapper and Cobia while the other was in the Breton Sound putting 4lb trout and Reds in the ice. Another great day in this paradise we call home.

Please like us on Facebook for more pics, videos and tips. Thanks for reading and we hope everyone has a great memorial day!

Gonna head out to Bayou Gauche this weekend with my daughter and hit the banks for some Sacalait and Bream. Anyone have any reports from the area? Whats the water looking like? Thanks 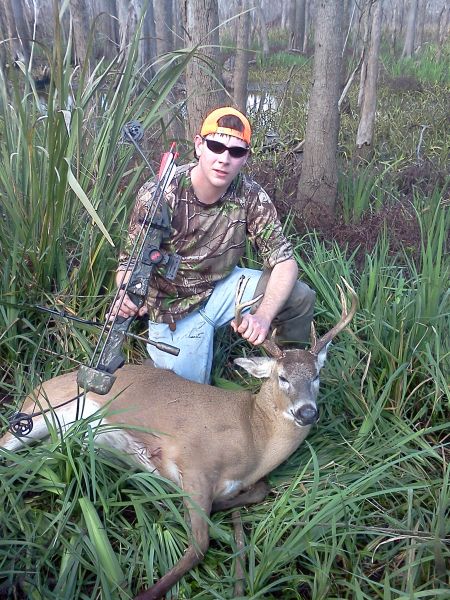 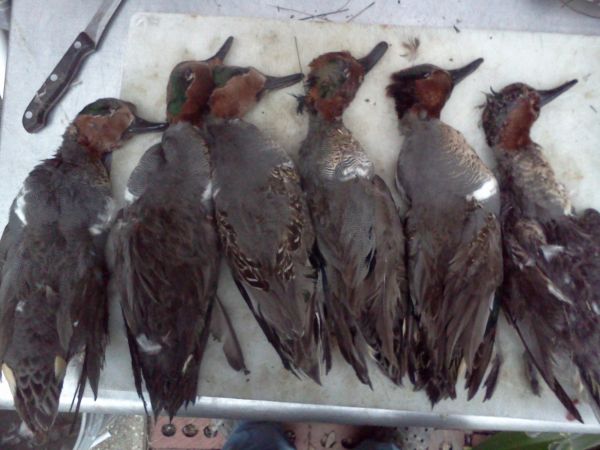 Had a slow hunt this morning but still managed a few. Like Coot said in a earlier post DO NOT trust the weatherman and the birds do not fly too well in the rain haha. Had a great time with 2 friends and ended with 6gwteal,1ringneck and 3scaup.

Once the rain let up the birds got pretty active but when it started again it never really let up so we called it a day. Big Ducks were no where to be found today. 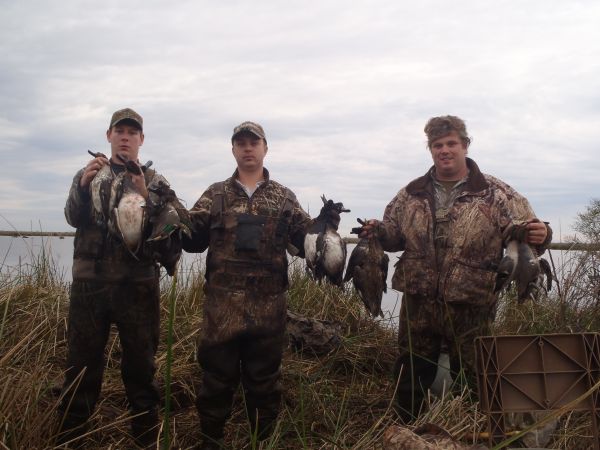 More public land limits in the SE for TDM. We hunted some low water in the broken marsh today and were done by 930. Hunted over a small spread and killed a 3 man limit consisting of Teal, Greys, Ringnecks and Scaup. Could of passed on the Scaup but shot them early not knowing what the day would bring. Either way it was a great hunt. Back at it again tomorrow. 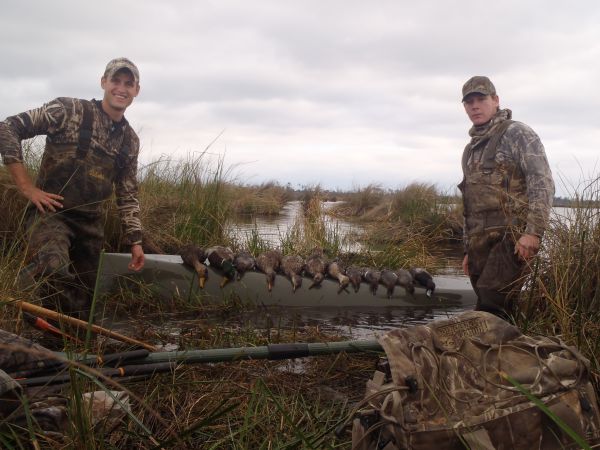 Its been a slow second split for us in the SE but finally the weather is helping us out. This last front pushed in some new birds to our area and provided good hunting this past weekend.

With more weather coming Im expecting the hunting to stay decent so get on em' while you can.

This is a clip from Sundays hunt. Hope ya'll enjoy 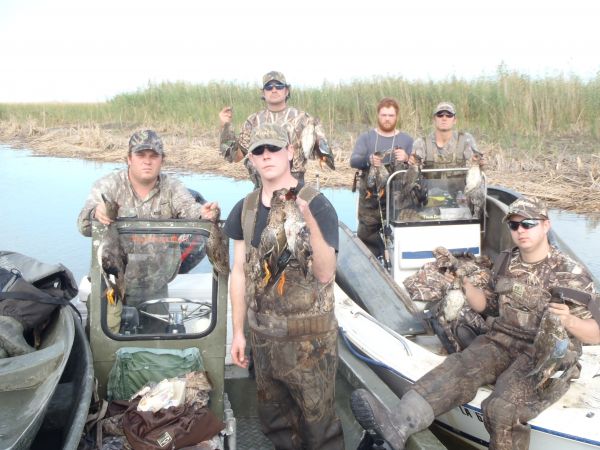 Well we headed down river with high hopes and ended the split with a couple of slower then usual hunts. Saturday wasnt too bad, killing 25 birds between 6 people (Mostly teal with a few Greys, Spoonies and Canvasback). After the hunt we scouted a little and found an area holding a decent amount birds including Greys, Pintail and a few teal.

Sunday was my birthday and my daughter Sophia joined Me, Roland and Shamon for a hunt. We hunted the spot we found the birds the day before and they never showed up like we expected. We got a few opportunities, capitalizing on them all, and ended the day with 3 Pintail drakes, 3 BwTeal and 3GwTeal. None the less this was my favorite hunt of the year sharing my bday in the blind with my daughter.

Hope everyone had a great first split and lets get back on em' hard for the second half.

Thanks Troy. Sent you a pm

September 16, 2014 at 10:14pm
A comment titled: Gauche in response to a report titled: Sacalait hanging in Gauche!

Nice job Troy. Way to keep at it. Any luck jiggin for bass?

That is awesome man. Congrats to both of y'all! Great job!

Sorry for the late response Troy. Just pm'd you.
Congrats on another good trip. Hopefully I can get a few this weekend.

January 20, 2014 at 9:28pm
A comment titled: Greys in response to a report titled: Good hunt for warm weather

Looks good to me!

December 23, 2013 at 2:42pm
A comment titled: Thanks Agent in response to a report titled: Great start to the second split

December 22, 2013 at 9:17pm
A comment titled: Eaglehead in response to a report titled: Great start to the second split

Thanks man. Its funny, I let a buddy have the rest of my shells after I shot my limit cuz he forgot to bring an extra box with him. I kept 2 shells just in case some Geese came within range and low and behold right before we started picking up 6 came over and it was a one shot kill.

December 04, 2013 at 12:13pm
A comment titled: Thanks in response to a report titled: More Public land limits

Thanks guys. We definitely put in a lot of work to kill ducks. Gotta do it while you can.

Great pics as always Coot. Nice job by you and the young ones.

November 07, 2013 at 6:12pm
A comment titled: youth in response to a report titled: Never too young to take them duck hunting

September 18, 2013 at 6:28pm
A comment titled: Call shy in response to a report titled: Teal Slaughter

haha Thanks Choupic. Yea I guess it could have been worse, they just didnt work like they usually do. Most birds were singles and doubles that couldnt resist I guess!

September 18, 2013 at 6:24pm
A comment titled: Awesome pics in response to a report titled: Got em again

Looks like a grand ole time choupic. Thanks for posting. Ive spent my bday in the duck blind for almost 10 years straight now, wouldnt have it any other way.

Never seen Teal as shy as they were this weekend for some reason. Usually the mojo will suck em in every time.

I love the outdoors. Lets preserve it guys! Throw your trash in a can!!