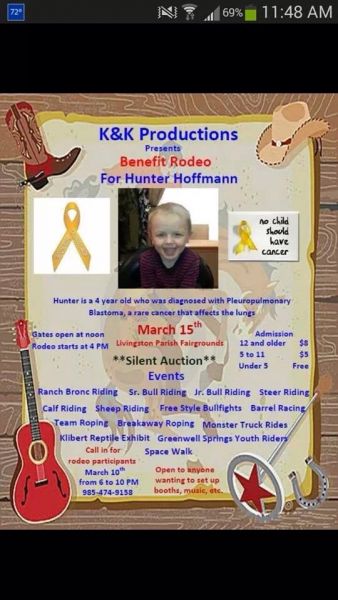 Hunter Hoffmann was diagnosed on his 4th birthday this last December with a cancer known as Pleuropulomary Blastoma (PPG). This is a very rare cancer only discovered in the 90's with less than 1/2% of the worldwide population diagnosed yearly, which equates to 10-14 children. Hunter had a softball size mass removed and has a port-a-cath (semipermanent) IV placed for chemo treatments. Thus far Hunter has received 7 treatments with numerous side effects; loss of hair and appetite, weights loss, fatigue, mouth sores, constipation, light sensitivity, and jaw pain that causes him to grind his teeth. We have 33 treatments left at children's hostipal. We are having a benefit rodeo at the livingson parish fair grounds on March 15 th starting at noon gates will open for monster truck rides,kleibert aligator and turtle farm will be there, pony rides, space walks, jambalya cook off for anyone that would like to pretisepate call 9856404788, will have micheals seafood there boiling crawfish, dons seafood, and voodoo BBQ. Will also have a auction with lots of things like hunting trips , fishing trips, and lots more. At 4pm the rodeo will start anyone intrested in riding call 9853512674 hope to see everyone there!! 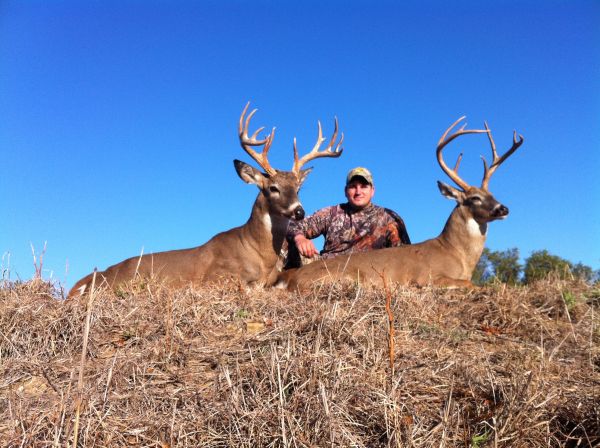 Two Big Bucks killed in One day!One 15point and a 8 point with 6inch bases

I hunting in laurel ms an wanting to know if cross bows are illegial.. 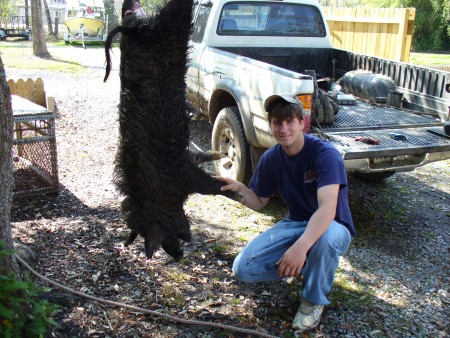 Where in st tammany parish was this pic taken?

I have a 160 pound sal that has 4inch cutters no lye. I put my dogs in da pen and she cut da hell out of them. I am gunna sell her for 75 dollars if ur interested. Email me at hoghunter434@yahoo.com

September 11, 2008 at 8:19pm
A comment titled: LOOKING FOR CATCH DOG in response to a report titled: hogs n dogs

LOOKING FOR A PITBULL THATS ALREADY CATCHING IF ANYONE HAS ONE EMAIL ME AT deerhunter8501@yahoo.com

I have hog dogs where are u located we will glad to come take a bunch out for you please email me at deerhunter8501@yahoo.com if you need someone to come thin them out!!!

September 20, 2006 at 3:05pm
A comment titled: Fake in response to a report titled: This is the only one I have from the boat

If u catching big bass like that where u fishing

Im a crabber and if u go between the twin span and lake the rigolets bridge along the shore line u will do real good the crabs are running good and fat!

Im a crabber and if u go between the twin span and lake the rigolets bridge along the shore line u will do real good the crabs are running good and fat!

Jon H has not filled this section yet.