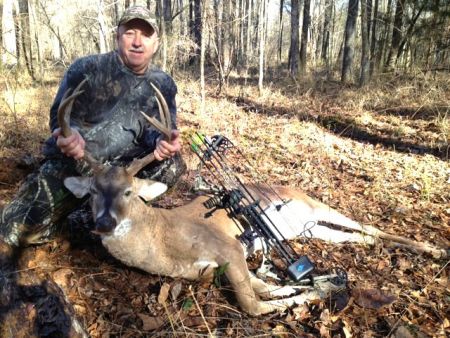 I' m looking for a deer hunting club to join for next season!

Each year my brother in law and I travel to Columbus, MS for a deer hunt on private property. The two thousand acre plot is located on the Tom Bigbee River. The owner wanted only bucks hunted in the first afternoon and either sex in the morning. My brother in law dropped a 220 pound 10 pointer in a food plot the first afternoon hunt. I didn't see a buck I could shoot. The next morning I asked if I could hunt with a bow. The only stand I could hunt out of was a box stand without a top. The stand is usually used for younger hunters because it was located near a road and the farthest shot with a rifle would be 100 yards. It was on a trail between two food plots. 40 yards to my right was a plot about 60 X 80 yards. Thirty yards behind the stand was a smaller food plot. Around the stand were some saplings and a large oak tree that the stand leaned against giving me some cover . With the water rising in early January the deer were funneling next to a deep slough about 50 yards to my left which was a little too far for a bow shot but had movement by does the first hour of the hunt. At about 7:00 I had a glimpse of a buck chasing a doe in the woods, again out of range. I kept thinking I should have brought my rifle. I would have at lease had a doe by now. At 7:50 I saw a movement near the slough but couldnt make out whether it was a buck or doe. The slough was surrounded by large briar patches that could hide just about anything. I grabbed my bow and turned in that direction to just be ready. As the deer moved through the briar I saw some antlers. The rule on bucks by the owner is if youre going to mount it you can shoot it. He preferred 8 point or better and outside the ears. Of course that was the rule for rifle hunting. I didnt ask about bow hunting. Very few people hunted the property with bows..the reason  there were no bow stands. All stands were closed in box stands unless a climber was used. I had made other bow hunts but never had a deer kill. Shooting branches and distance guessing spoiled some doe shots. I had shot rabbits and squirrels with my bow but never a deer. So now Im ready for my shot and about 60 yards away is an 8 pointer slowly moving toward the small food plot behind me. Earlier I did range a few trees in every direction so distance would not be a guessing game. It looked as though the buck was heading toward one of my marker trees at 30 yards. The buck disappears behind a briar patch next to the food plot. This enabled me to draw and position my 30 yard pin on my impending target. After 2 minutes of waiting, which felt like 10 minutes, the buck appears a little closer to me. So I guessed at 28 yards, but the buck is at a fast walk. I assumed the openness of the food plot made him move at a faster pace. I let the arrow fly and heard a thump while the buck ran off. In all my practicing I had a routine of pull, point, release saying it in miy mind. I can tell you that shooting at my first buck I never thought of the three steps one time. It was like the many practices became routine and the pull, point, and release never crossed my mind. I normally wear glasses but cant shoot with them. So, where I hit the deer was questionable, but the thump meant I did hit him. I had forgotten my binoculars in my truck so looking on the ground for my arrow was not going to happen unless I climbed down to look. I waited about 30 minutes and couldnt stand it anymore. I made my way to the shot site and found my arrow covered with blood from the nock to the broadhead. I didnt find a blood trail for about the first 20 yards of the path where the buck ran. The blood trail led me across a road and in to the woods again. Forty more yards and there he was.a 180 pound 8 pointer. I sat next to the buck and thanked the lord and my wife for the opportunity to hunt and be successful at hunting. It was my first bow kill and will be on the wall in my man cave.

I am a long time deer hunter, Started at about 12 years old running dogs in the swamps of Chacahoula, LA.