For a 2 stroke outboard. When done for the day, is it better to disconnect the fuel line and run the gas out? Also, how tight should the motor be trimmed down against the transom saver? never knew these answers.

I was wondering how long will fish such as bass and catfish keep in the freezer? I've heard varying answers to this and I know this site is where I can get a real idea.

Went to run the boat at the St. James boat club at Blind River. Lots of smelly water rolling through. Both ramps are full of dead and dying fish. Plenty of nice bass, bream, catfish , and sac au lait right on the concrete backdown area gasping for air this morning. I fear the worst but really hope that a major fish kill isn't in progress?

Have recently been thinking of trying to catch a few crabs. I have only ran lines as a youngster in the surf. I need an education on using a trap. Kind of trap? The best way/depth/place to set? bait? how long to wait to check? Any help would be appreciated.

Anyone here use a cajun anchor? I was curious as to how good they work?

Where would I find tide info/guide for the lake salvador area???? 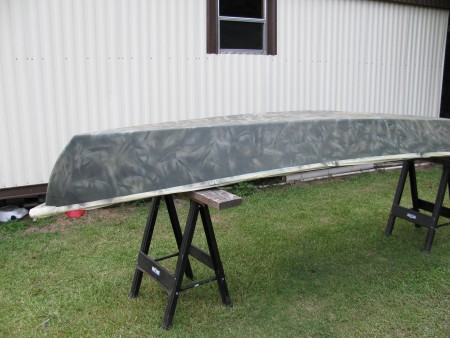 Does anyone know how much antlers, spread, etc.. shrink during the 60 day drying period?

I am kind of interested in getting a 400cc class atv. I was really interested in the rancher. A friend of mine told me that I should ask anyone and they will tell me that Hondas are nothing but trouble. He has an Artic cat with thousands invested....rims,lift,..etc.ect.. says artic cat is by far the best. I was under the impression that hondas were reliable. I am not going deep mudding or anything like that. Mainly hunting. Opinions please.

Well I tried to get my deer tags from Wal-mart in Gonzales with no luck. The lady said that they have them but you have to buy a hunting license to get them.(basic..big game...etc) I explained that I had a lifetime license and she replied " yeh, but you have to BUY a license to get the tags". So, do I need to go to the ldwf headquarters to get my tags since I have a lifetime license? Guess i will just call them. 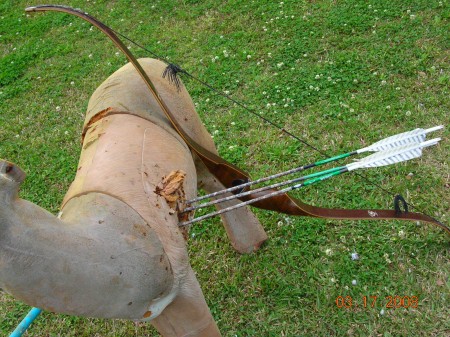 need advice from traditional archers in the know. I get good 20 yard groups like this but I move to 25 and the group falls way apart. I had my heart set on being able to take a deer at 25 yards with my recurve if I get the opportunity. My shooting is so poor at 25 that I couldn't hardly take a shot with a clear conscience. how can 5 yards make so much difference? I've been shooting like a madman for a month and a half. I'm starting to think that I'll just be a 20 yard hunter with it. How long should it take to get "good enough" at 25 yards? 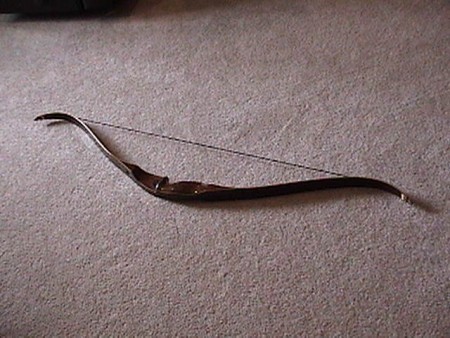 Its an old Red wing hunter (Bob Lee) recurve. I have kicked around the idea of hunting with it for 2 years.
I just imagine that it's gonna be a hell of an experience. Sick and tired of trying to keep up with technology, I'll just go the opposite direction! probably have the biggest buck of my life mill around at 35 yards. Oh well, it will be fun and nerve-racking. Anyone on here hunt traditional? I am at the entry level and would appreciate tips. What broadheads for starters? Its a 55# bow. I am confident to 22 yards ( not much range huh?)

Saw the post about the 25-06 and it got me thinking. I am back into rifle hunting as of this year and have acquired a .270 . A couple of people have told me that they don't like the caliber and deer usually run off after getting shot with it. I was under the impression that it was an excellent caliber for deer!!!!????? People, please help me to feel better about my rifle. I thought it was very popular and the ballistics look more than adequate. I want first hand accounts from any .270 hunters. What kind of bullets...performance...etc.. Please.

a clip of anti hunters in action!!! I can only imagine if they tried this in south louisiana! They are trying to keep duck hunters from leaving the launch by holding their boat by hand! Don't know how to post a link but the address is
www.liveleak.com/view?i=ba7_1178335650
WARNING!!! Graphic language throughout!

That's awesome! finally someone holding a big fish without long arming it towards the camera. This truly shows how big the fish is. And it is!!!

So what if one is deer hunting only with a shotgun? Slugs to be specific. Does the plug have to stay in? limited to 3 shots deer hunting because of using shotgun?

Im a recurve shooter. The year before last I had the same issue. Hurt really good. Mine turned out to be a middle deltoid strain. Fortunately, I too work at a hospital. Just so happens one of my coworkers was a PT certified in dry needling. I suffered for weeks with hard headedness till I asked for help. She did a really good eval to make sure that it was what she thought it was before needling. Got better very quickly. Of course though, when dealing with a shoulder, it could be so many things. So you want an accurate diagnosis.

Outstanding! Congrats to you sir! He's a true brute!

What a buck! Congrats! It's very easy to just leave the rain and find a warm and dry place to hang out. But if you stick it out you just never know. As i get older I am finding warm and dry spots more often than not. Great job! love the dark rack!!

I'm far from an expert but a deer of that caliber must have a slot somewhere in the Miss. record books? Congrats! Can't imagine what that looked like coming through the woods!!

Gotcha. I got WMA permit on the brain

September 24, 2014 at 10:33pm
A comment titled: Wrong in response to a report titled: Why is LDWF Leaving Money On the Table

Wrong bayou wild outdoors. Only hunters have to purchase the WMA permit. All other users just need a wild la stamp, fishing license or a hunting license. I thought that was crazy when it was first implemented.

Thank goodness it wasn't worse! That just proves that it doesn't have to be cracking evey ten seconds for someone to get struck!!

Wow! That is beautiful! Congrats!!

Awesome! They do make beautiful mounts!

If I had the knowledge I would help you 100% as I am going through this with my 7 year old in freshwater. I hope ya'll find a way to tear them up!!!!

June 07, 2014 at 7:29am
A comment titled: great video in response to a report titled: Henderson Fishing Vid

Love the video! Keep em coming. Who is the band? Love their version. ' My black girl, where did you go last night?' Something like that.

May 10, 2014 at 8:12am
A comment titled: Bonne Carre in response to a report titled: Frist time fishing the spillway

I went in the brutal wind today guys. 40 acre lake. Caught 4 bass. All around 12'. Had to fish the south/leeward bank. Tried spinnerbaits,cranks, chatterbaits. Only a 5' junebug colored senko could elicit bites it seemed. Missed a couple the same size also.

April 28, 2014 at 8:47pm
A comment titled: The walls at home in response to a report titled: deer hunting shows on TV

Couldn't begin to imagine what their walls at home look like. Be kind of weird that some of them would have names.

September 22, 2013 at 8:57am
A comment titled: The Pros in response to a report titled: deer hunting shows on TV

Agree. They really bust their hump scouting and getting to a stand for the hunt. Then watch them gut shoot a monster buck at 60 yards with a bow, turn around and say 'I smoked him'!! Fist bumps,product endorsements, and how hard he's hunted for the deer till he got the shot. ' I didn't think that it was gonna happen for us'. Then he follows with, 'This is my 4th day of hard hunting'. Impressive.

Has an amazing golden color to it. Awesome.

birdnest has not filled this section yet.