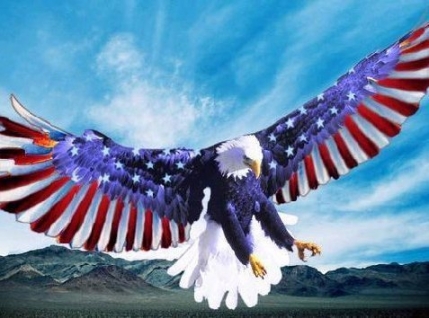 Ducks in response to a report titled:  Pics for my southern brothers

WE THE PEOPLE IN ORDER TO FORM A MORE PERFECT UNION; I will reach the middle age of 55 years this month on the 23rd and I worry about our &#039;Union&#039;! Never in my lifetime would my small brain ever conceive the notion of a fully tyrannical federal government.

The last time this happened was 1775:

On April 19, 1775, some 800 British troops were dispatched to Concord, Mass., to arrest Sam Adams and John Hancock and to seize a cache of weapons known to be stored at Concord. When Dr. Joseph Warren sent Paul Revere to warn Pastor Jonas Clark (in whose home Adams and Hancock were staying) the Crowns troops were on their way to arrest the two men and seize the guns at Concord, he alerted his male congregants. About 60-70 men from the Church of Lexington stood armed on Lexington Green awaiting the Red Coats.

My 6th grade history class taught me what happened next, it&#039;s called a Revolution. No, I&#039;m not the crazy guy out there calling to my buddies to pick up arms against the feds and start a revolution, BUT.

I am an opportunist, and I work that word to the utmost. Case in point, recently my hunting camp was visited for the second year by very high ranking officers in an adjacent states, State Police Department. Names and states will remain anonymous for obvious reasons. My question was this, now that the federal government (and candidates for those offices) have made an official statement that &#039;they&#039; will circumvent our &#039;House&#039; and &#039;Senate&#039; and work towards gun confiscation. As high ranking (number two, SBI) officers of your state, will you protect the constitutional rights of your citizens? Or, will you side with our newly &#039;tyrannical&#039; federal government and participate in this unlawful confiscation of guns from the American People. Wow, isn&#039;t that a loaded question was the response I got (laughingly, haha, &#039;loaded&#039;). Then the room became silent, none of my buddies could believe I had asked that question to someone of that &#039;high stature&#039; in a States Government. The answer truly

astounded me, and shocked the room. Sir, not only would I defend your rights, but I will defend the Constitution to my death. So much so that I too have weapons cached so that my Federal Government cannot stop me from defending my rights as a citizen. Then the real conversation started!! What about home? Will the Louisiana State Police take up arms against me as a Louisiana Citizen when the British (read the first paragraph) come to seize our caches. Or, as our brothers from next door stated, &#039;we will defend your States rights as a citizen&#039;. How about our local police departments, Cities, Sheriff&#039;s?

Men and Women, this is happening in your life time too. Will you watch as did the people of Australia, and see your AR or AK be put to the chop saw. Or will you speak out, form a group and ask the difficult questions of our time? I did and I know where I will travel when a Blue Hat knocks at my door and says, &#039;hand me your guns&#039;. 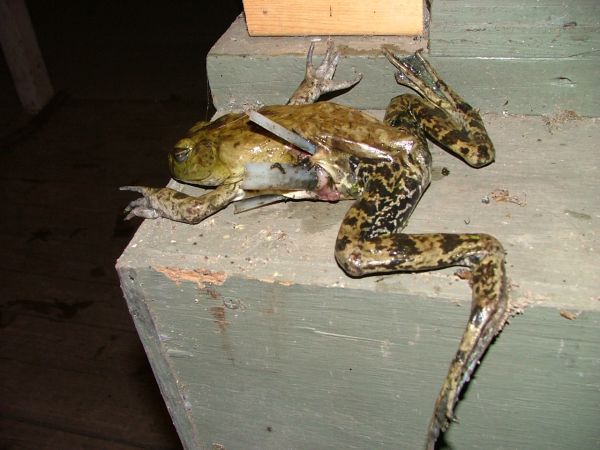 I caught this frog recently on land that we duck hunt around Forked Island. After grabbing the frog I noticed he was on a diet. 'The diet' ended up being one of our shotgun shell wads. He ate it and over time tried to spit it up. You can see what happened, it came all the way out through his stomach and skin. The frog was still alive when caught, but wasn't doing to well.

Whats going on? Notice the name on the side of this boat as posted in the 'gallery' section of our own Louisiana Wildlife and Fisheries Website! Why would our State with an ongoing battle over Federal waters Snapper fishing be enforcing those very laws?!!!!!!! I hear tell they are are enforcing the 'grey area' between our claimed Louisiana waters and the Feds. Maybe Sen. Vitter and LDWF can write an op-ed piece on this situation, who's side is the state on. Snapper fisherman, we need to get organized, NOBODY has our backs!

While working an excavator around Forked Island, I almost ran over an alligator nest. When I came back down the levee the female on the nest let me know she wasn't happy. New alligators soon!! 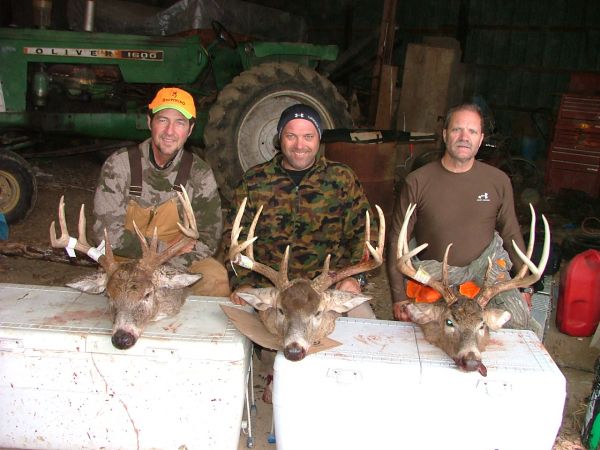 Buddies and I took these three monsters off of my lease in Iowa. It was on a group hunt over a 5 day period. Mother Nature was kind to us that week, it was a lot of fun.

June 14, 2012 at 2:22pm
A comment titled: Ducks in response to a report titled: Pics for my southern brothers

We were wondering where the ducks were this year!
Glad you guys had em, congrats. I deer hunt Iowa every year, looks like Ohio can compete!

Born and raised in Lafayette, hunted and fished all my life. Member of the Forked Island Sports Club, our local Duck and Deer get away.