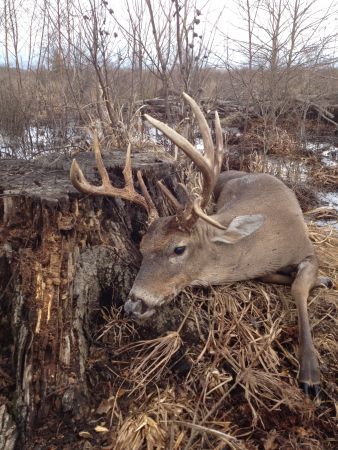 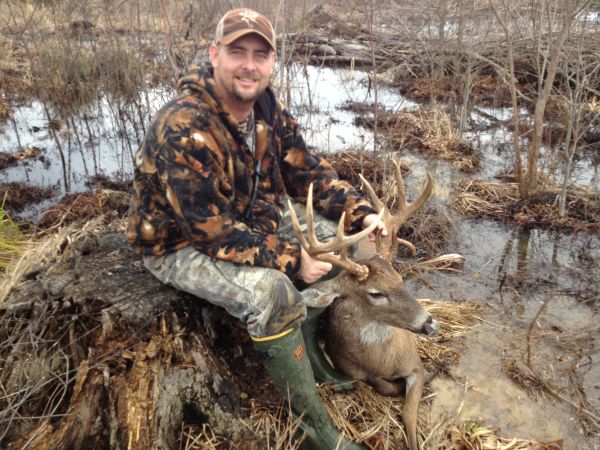 Got in the box stand around 6:00 Sunday morning. The fog was so heavy I couldn't see past 50 yards until about 9:30. Well for some strange reason at 10:00 I decided to try another location, I went to a ladder stand 600 yards from where I was. At 11:00 I spotted my first deer of the day, it was a 5 point. He had 4 points on one side and 1 on the other (I decided to pass on him). 15 minutes later out comes a doe by herself, my friend(Whos property i was hunting) doesn't allow doe killing on his place, so she was safe. 5 minutes later another doe comes out, she was nervous, behind her I saw another deer, it's a buck. I grab my rifle and throw up the scope, he's right in the center of my scope(how lucky is that?) it's a giant. He's facing me, so I waited for him to turn to get a good shot, he turns and i pull the trigger. The buck takes off about 30 yards and stops(must've missed) so I shot again. The buck then takes off and runs the other direction and i can't see him anymore. So I nervously call my wife and tell her that i just shot a big one and i can't wait to go find him. The area he was in is an old cut over that has a swampy bottom to it. There was a hole in the grown up cut over measuring about a half an acre or so. I walked about 100 yards in there and there he was. All i could say was thank you dad and jesus for helping me find this beautiful deer. At first i thought he was an 11 point but he's got a point behind his right antler right above his head. I've hunted all my life to get a deer like this and i'm so happy to finally get one.

I have been hunting deer since I was 10 yrs old. Had 3 encounters with big bucks prior to my 12pt. Every time something seemed to go wrong and I would go home without them. This last one almost got away from me as well but I kept my cool and made it happen.