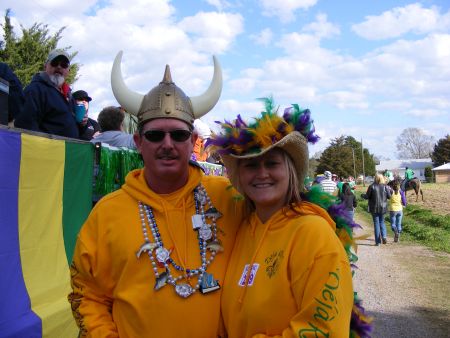 amen in response to a report titled:  Bowfishing bill pulled

I'm looking at buying a new Thompson Pro Hunter 270, could I get some feed back from some of you fellow gun owners.Also looking at the muzzle loader barrel..

anyone catching crab in rock or vermillion bay? Been working and thinking of just getting out this week end and would appreciate some reports...

Anyone know where I can get a used ice machine? 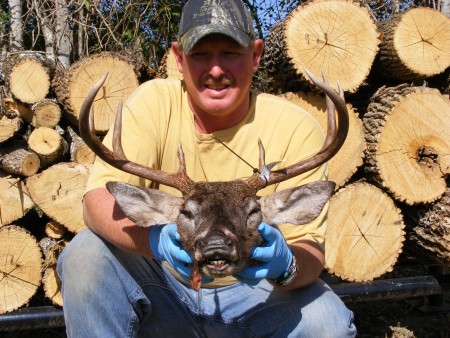 FYI....From one coonass to another when hunting Texas shoot'em high in the shoulder everything over there will bit and stick you....stacked this one earlier this year...with no thrones

I never hear of anyone hunting Indian Bayou us corp next to Sherburne. Do any of you'll hunt there? I'm planning on do some hunts of there this year and was just wondering...

looking for some suggestions on what type 17 and scope to get for shooting some varmits? I would like to not pay a arm and leg, but want something good...Your advice is appreciated,Thanks

What you guys think of the fire proof Sentry safe from academy for 500 it's 1200degrees for 30min? Pro or cons
Thanks

Anyone know where to get some river shrimp traps?

I wondering if I could get some suggestions from you guys. What would be a fair price for AKC Registered Chocolate lab pups with good hunting bloodlines on both sides? I paid $400 for the mother.

Anyone been crabbing at rockerfella refuge? 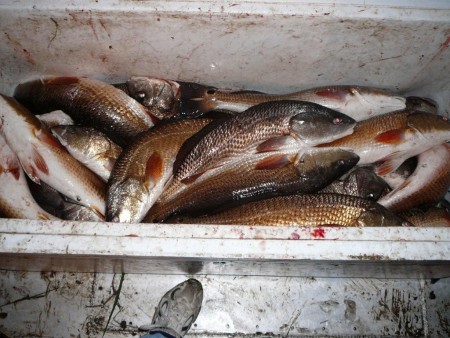 Another great trip out with our old freinds (M&M) down in Leeville.

Does anyone have a picture of pipes used for catfishing. I'm
intersted in trying to make my own, but unsure exactly how. I'm also would like to build some box for grabbing or noddling, but havn't found anyone who know. Please e-mail if any one can help in any way. 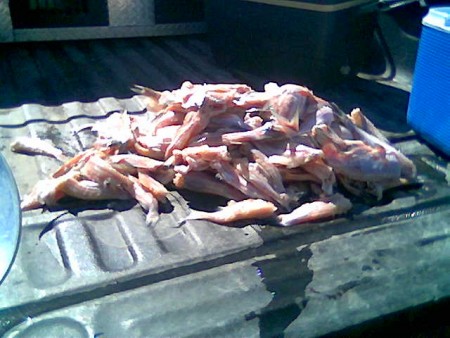 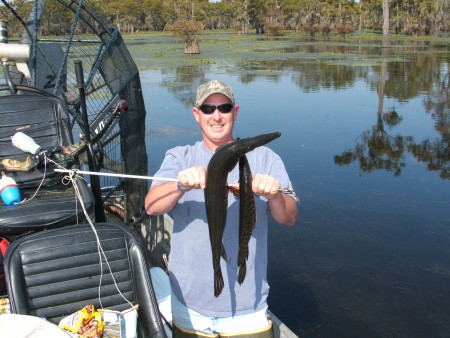 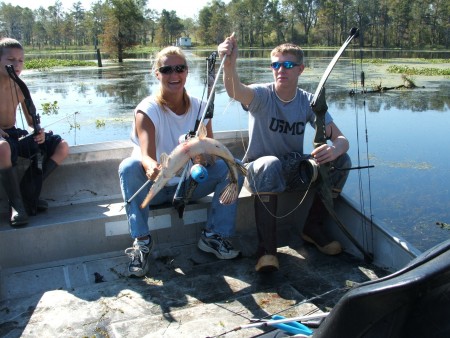 Here are some fish we shot out of the basin. We also go south for red's, black's/ etc. If we just have to get it out our system and can't make the trip, we just go to the swamp... 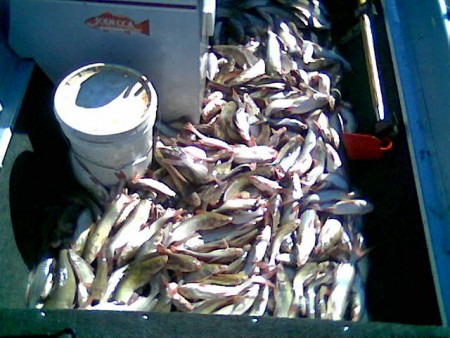 We caught these fish on New Years day. Needless to say we have enough fish to make it through Lent.

Please advise to settle a dispute among co-workers. You are allowed 25 under size catfish within a 100 fish limit. Can you get away with having 50 fish in possesion with 25 under size? 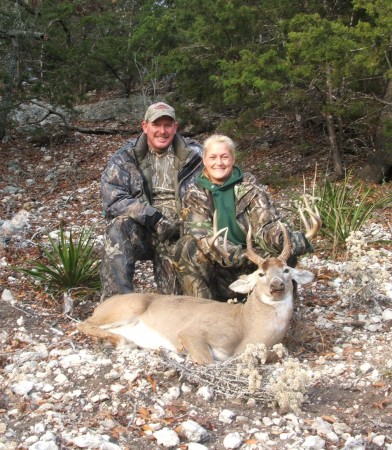 I am 33 yrs. old and My husband and I hunt, fish,bowfish,commercial shrimp, you name it we do it. We have 5 kids who also enjoy the outdoors with us. I shot a Trophy (in my book anyway) buck 3 weeks ago in Kerville Tx. He was shot at 110 yrds. Weighed 155#'s, 10 pt. with split bow tine and 18 1/2 inside spread with 5 1/2 inch bases. But you know what the best part of it is. My husband was with me in the stand. I think he was more excited for me than I was. Not only did I have buck fever then but I still have it. Now I know what its like when you'll say " BUCK FEVER" It was a experience I will never forget, Now I can put that buck on my wall next to my husbands. I hope one day to experience the same thing my kids.
We are new subscribers to La. sportsmen and I wanted to share my excitement with the rest of you'll
Thank you Lord again for a dream hunt come true.
God Bless

December 28, 2006 at 7:14pm
A comment titled: amen in response to a report titled: Bowfishing bill pulled

I'm glad to see this bill go away..I just hope they don't hide this in a later bill and it get passed through!!! I wish we would get this kinda policial interaction with all the 'real' issues our countries facing know days...Let's stick together protecting our rights to be sportsman, and quit fighting amoungst each other.

Try E 6000 from walmart or the JB weld as already stated. I have the same problem and have reconected it 3 or 4 times with these products. I perfer the E 60000, it last longer

I'm a commerical fisherman, sportsman and bowfisherman who supports no change from our current laws. I will be there to support my side, but if you had to draw aline in the sand and be objective,would it make sense for both sides to win. We are allowed to take 100 redfish a year per person, that must be legaly tagged,as we do deer now in La.. You can take with any method you perfer as the current laws allow. Then it would be fair to everyone.Again, I would perfer no Change, as we know what that is doing for us right now. Can we collectively decide on something where we all can win...and all you charter fishermen be careful what you ask far as you will probally be in the cross hairs next.

When were them things caught?

February 01, 2009 at 2:33pm
A comment titled: Hands down in response to a report titled: Knife Sharpeners

Chef's choice 3 stage diamond....Hands down some of the best money I ever spent. One of my freinds turn my on to this and he does taxidermy work,just my 2 cents..

January 24, 2009 at 12:41pm
A comment titled: Check the rules for more info. in response to a report titled: Indian Bayou Advice

I think it's gun season right now for bucks only,check the reg's. I not sure but I'd wait till it's over...just my opinion...

Where do you find information on this place?

December 28, 2008 at 4:28pm
A comment titled: Getting started in response to a report titled: coonhunters

What area are you hunting? I have a freind just getting started also around Henderson (Basin)if your not to far maybe we can try to get in contact with other and make a hunt...Later

December 23, 2008 at 7:34pm
A comment titled: Thanks in response to a report titled: Suggestions

October 28, 2008 at 8:17pm
A comment titled: thanks in response to a report titled: looking for advice

Thank you guys...I was thinking along the same lines,I'll just get her a $30 tasco,her buck on the wall is bigger than mine so I need a advatange to catch up.

I used the minnow traps from Acacademy, they caught a few,but not what I was looking for.....

That was what I thought also,thanks

April 08, 2008 at 8:57pm
A comment titled: been there in response to a report titled: Rockafeller reports

I took my family saturday and limited in about three hours. They were mixed but all were FULL...

I currently have a 140 susuki 5yrs old with 6000hrs, and have never had a problem. I use it on a 24 ft shrimp boat and like you had to make a decision on a motor 5 yrs ago. I maybe lucky, but I would do it all over again.

March 11, 2008 at 8:09pm
A comment titled: Just wondering in response to a report titled: bowfishing

Deadeye where you'll slinging arrows? I go to Henderson, you anywhere close?

Make gar balls and trade the carp for crawfish. The fisherman have to pay outrages prices for cut bait. I do it year round......Keep the arrows flying!!!

Gone Vermillion bay tommorrow, talked to the biologist and said that the shrimp were smaller than last year and not as many either. He said that cold snap for easter hurt us..Any good net builders on your end? Good luck and let us know how you did.....

Great ideas, but we are 10%'ers and they out number us by 90%. They use our tax dollars to get elected to their office , and drive the voters to the election booths on election day. All we can do is stick to our guns and go down fightin....Keep fightin fella's