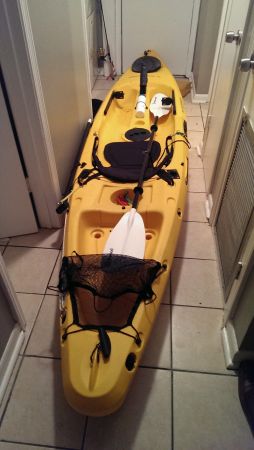 Triggers in response to a report titled:  9 Miles Out- Grand Isle 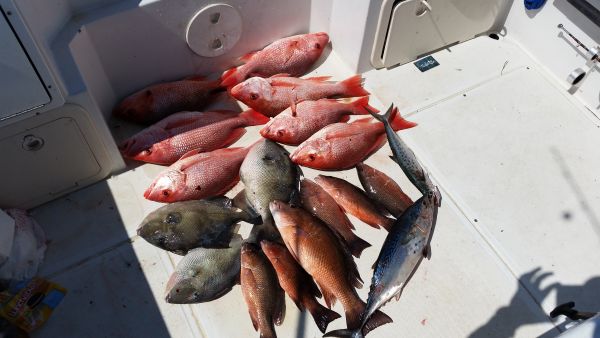 I was wondering if anyone has ever put in and fished this area. Or is the surf too bad? I see a few good spots off hwy 82 that you could put in but I never hear anyone talking about it. Would love to give it a try if anyone has any info.

I have 28 .22 rounds that I am willing to trade. I do not have my .22 rifle anymore and want to trade them for .270 bullets. Please respond if interested and live in the Baton Rouge Area.

Hey guys, I just getting into hunting. I use to hunt wiht my dad a long time ago with my dad in south arkansas. I was curious to know where are the best places with public acess to hunt hogs. I live in Denham Springs (baton rouge area). Any help would be great.

Hello fellow yakers. I am fairly new to kayak fishing (only about 6 months) but I am seriously hooked. I wanted to see if anyone was interested in going out or if there were any groups that went out together. Yak fishing is fun but I have learned that it is a lot more fun with more than one person, as safer. If anyone is interested or know of any groups going out morning evening or night fishing, weekend or what ever please let me know. I am pretty much open to going anywhere. Contact me at barrymcghee@gmail.com or just reply to the post. Thanks all!! 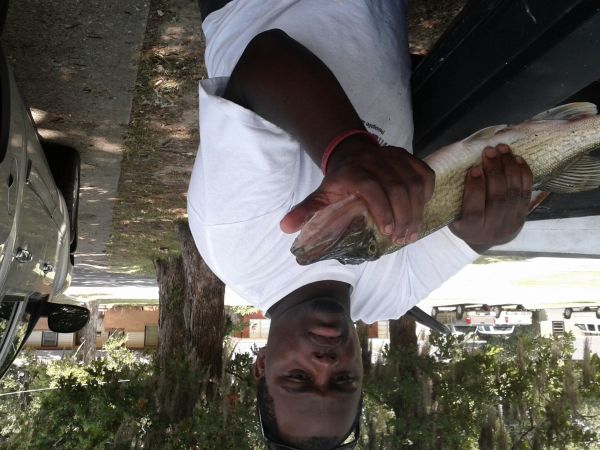 i was doing some fishing near Monroe, La on Bayou Bartholomew and hooked something this I was not expecting. I hooked a muskie. I have fished all over this state (salt and fresh) and have never heard of anyone even mentioning this fish. I have been invited on muskie fishing trips around Minneapolis but this fish is definitely not a Louisiana fish. Everyone puzzled that day. Has anyone else encountered this fish?????

I wanted to see if anyone was going out kayak fishing in the Slidell-Mandeville area. Going down with the family and going to treat my self to some good old saltwater yaking. Let me know if anyone would like a tag along!! He hear they are killing them at the Hwy 11 bridge. Tight lines!

If anyone is looking for a plus 1 this weekend, let me know. My buddies decided not to go but as for me I would like to be on the water. For a planned charter or what ever you have. let me know

Alright guys. I am visiting my parents up in north LA and I am going to an old child hood past time. Lake Claiborne. I havent fished there in a long time, and I think I am way to deep into saltwater fishing that I would know where to start on the lake. Anyone fished the lake in a while? How are they biting and where? Thanks in advance. 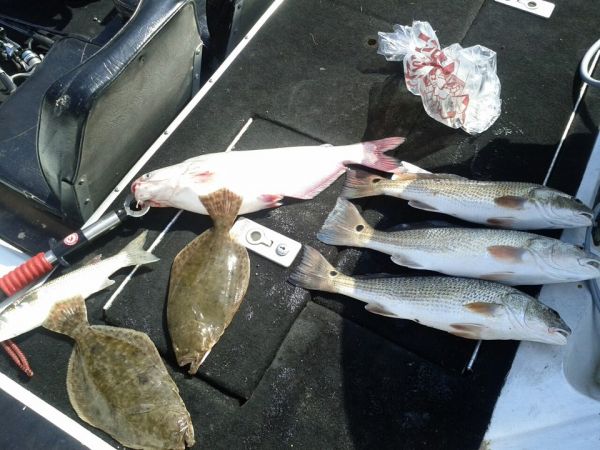 I really had fun riding solo across the lake to the trestles. Had my gps this time so I was able to cover more area. Wind was on 9-10mph's but the boat held up pretty well. Made it to the trestles but had no luck, strong current tossed me around like I was nothing. Hoping for some big trout but finished the day with 3 nice reds, 2 flounder and a big cat I snagged under Chef bridge on my first cast. Hope everyone else did well. Heading back to my hope town next weekend for some fresh water action on Lake Claiborne.

Ran into Sam Barbera last night at Bass Pro. I think I may have scared him a bit when I said his name. If you see this Sam sorry about that buddy. 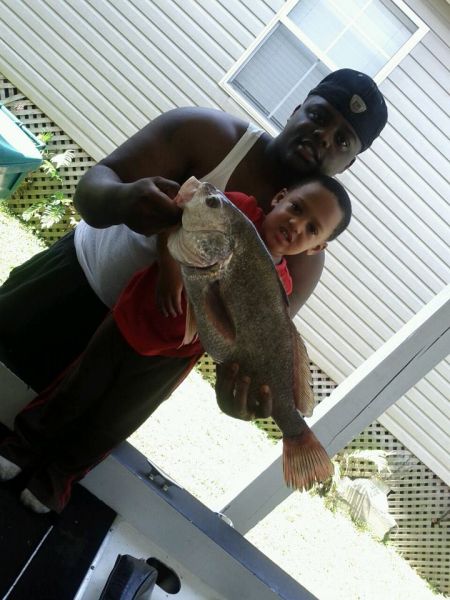 Windy day in Delacriox. The fish were just not biting on Saturday. Water was low and the waves were big enough to surf. This is still one of my favorite areas but it was just not a good day to be out. If anyone knows any spots in this area, please share them!

You should go to the hopedale/Shell Beach area. That is where I go. I have never gone and not caught fish (the last few weekends have been pretty good with reds. It is very kayak friendly with launch points along hwy 624. I will be there this weekend most likely since the weather is suppose to be good. Let me know if you make it. barrymcghee@gmail.com

Where can I get more info on this?

I know there is a place called the Rockerfeller Wildlife Refuge. Looks like there are a few places to launch there. May have to give it a try.

Yes. Worms or some kind of stink bait that would be easy for them to find in the water. Visibility is probably just a few inches right now.

Its is really good. I have trolled in my kayak and have always caught carfish around Port Vincent. They hide in the middle and under piers. Its pretty nasty right now with all the rain (moving very fast and a lot of debris!)

May see me out there.

February 26, 2014 at 4:59pm
A comment titled: Bayou Lacomb/Liberty in response to a report titled: Need tips on best kayak spots

Do you every have luck in that area? I fish Lacombe when I get a chance but it has been a while. What are you catching and I would love to join. Need to break in my Ride 115 LOL

Thanks for the comment. Yea..Its just 28 rounds. I sold my 22 rifle and bought a big boy gun (Stevens .270) And I know that .22 bullets are in high demand and I have no use for them. Thats why I was willing to trade them. I wish there was a store around here that traded ammo. :)

I was wondering the exact same thing. I usually hunt on private land in North LA but looking for something a little closer to BR. I will be scouting that area soon. Really done know where to start.

January 06, 2014 at 8:34am
A comment titled: Fishing Spots in response to a report titled: Kayak Fishing Louisiana Bayou Style

I would be interested in where you launched as well. Planning a trip in the morning for the north shore.

What a trip my friend!!!

Nice Catch. Where did you catch them? took my kayak out to the Northshore area (big branch) and never had any luck with specks.

October 08, 2013 at 7:57pm
A comment titled: Going to GI in response to a report titled: Kayak Fishing Partner

Yea I am taking the family down to do some camping at the state park strating today. I will be heading down here in a bit. So I will be there until Sunday.Going to try and maximize my time on the water. Let me know when you make it. 225-747-4323 or just email me barrymcghee@gmail.com. I need to know what spots to go to off the island.

I am also pretty new to kayak fishing only about 8 months in but really loving it. There seems to be no shortage of assessible fishing here in south LA. I have been told to go to Grand Isle when I had the chance, also the port sulphur/empire area you cant go wrong. I plan on heading to one of those areas this weekend.

GI would be awesome! Never been there in my Kayak. I may be fishing in a tournament this weekend some time but let me know what days you are thinking about going. I would love to tag along!! barrymcghee@gmail.com

That's what I hear. I will have to get down there soon to test out the new yak in the marsh. Thanks

September 20, 2013 at 9:18pm
A comment titled: Lafourche Parish in response to a report titled: New to sport

Lafourche Parish, now is that Galliano Golden Meadow area?? Been dying to get down that way in my kayak. Heard the red are always biting.

I live in Baton Rouge so I am always heading to slidell/Nola to do my fishing. Would love to tag along if you go out again.

I will be buying my first sit on top fishing kayak today. There are some excellent places here in BR to go and look at them.I think it will depend on the type of fishing you will be doing and where.

September 19, 2013 at 7:31am
A comment titled: In the same boat in response to a report titled: Kayak Fishing Baton Rouge

I just moved back to the baton rouge area. I use to take my bass boat out to the Amite River in Port Vincent. In really not up for taking my Kayak to the river (especially with all of the great marsh areas nearby) I think the closest place is in Mandeville around Fontainebleau State Park. I have also went further east to big branch marsh in Lacombe and had some luck. I have been dying to get back to the rigolets area in slidell. When I had my boat this was a really good area, always caught fish. I do think that if you wanted make a longer drive there are a lot of people that launch in the areas south of New Orleans (Hopedale, Lafitte, Barataria, Delacroix). I would take a look at google maps and look at the area. If you can find a good place around Maurapas (just south of Hammond) that would also be a good area. Hope to see you on the water!

Proud owner of a Field & Stream Eagle Talon 12 Kayak that I use strictly to fish..Im hooked!!!!