Ragin it in response to a report titled:  Rage 2 blade 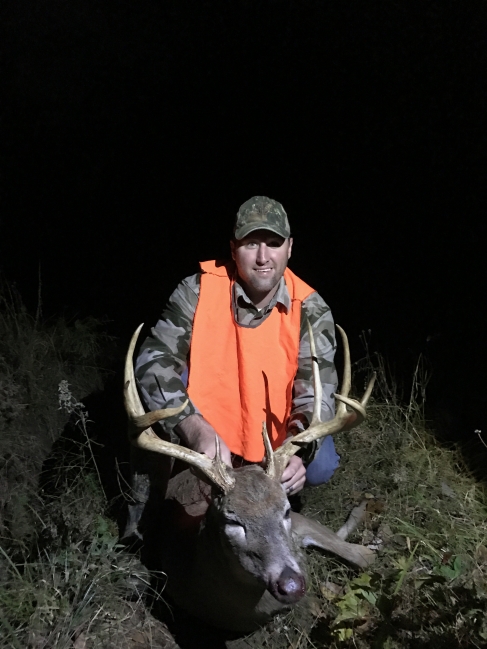 I shot this ten point the Wednesday evening before Thanksgiving on a highline stand we have on some family property just north of Lake Claiborne. He came out about 15 minutes after some does during the Rut at 160yards. I saw him with his head down and a big fork on his left side. I threw up my gun and just happen to have the cross hairs right where I wanted them. I made the mistake of looking at the rack one more time as he turn his head to look my way where the does were. I saw he was outside the ears and squeezed the trigger. I waited as long as I could stand it which wasn't long. I ran down there and found some blood, lung blood and trailed him into the woods about 50 yards and there he was.

I need a little help. My 13 yr old nephew want to go duck hunting. Now he doesnt have the hunter safety course yet but plans on getting it soon.

Can he come hunting with me and shoot ducks? Would the limit still be MY six ducks? Are the youth require by a curtain age to have the hunters safety course?

Any Help is appreciated. i want him to be about to experience it correctly.

Going fishing with the inlaws this saturday in dulage and I've never been there, also haven't gotten on the trout yet this year, could any of you guys help me out on where to find them and what they bitting on, live or plastic? Thanks a head of time!!! Reds too!?! 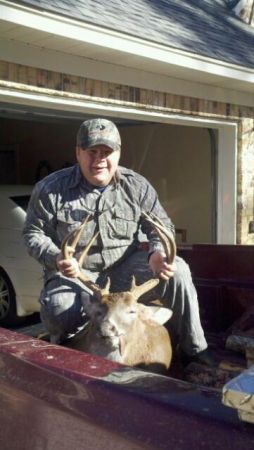 My little Cuz has Done it again for the Second Year in a row. Last year a beautiful 9pt. And now This awesome 8pt. Was shot on some family property south of Ruston yesturday morning with the Temperature in the Teens. He wasn't going to hunt but decided it was a good day and man was he right!! 40yr shot in the spine and one in the neck to seal the deal. This guy puts alot of time and effort throughout the year getting the areas we hunt ready for the season. This was well deserved for you CARL, Congrats again!!!!!

What is the Deal with All these Whisling Duck around St. James to St. Bernard Parishes? Could they even be shot? During regular season? What's the limit? They are taking over the swamp. Roosting in wood duck hole and pretty much any big tree's. they didn't used to be around, but the last 5 or so years they have Multipled by the tons!!

I tell you what dude. I wouldn't give up on them yet. I fine they fly just like a field tip and for not being as shape as i would like them to be, they sure put out a mean cut. I loss two or three does with my rage three blades, so i switched to slick trick's (which i HIGHLY recommend, HIGHLY, fly like field tip, just try them). But with those rages, i think i just may have made a bad shot. One doe was quarter and away and same issue as you lost her, second doe i don't where i hit her. After going to slick tricks, i still kept three rages in the quiver and chose to use one on a hog. He squaled like crazy when i hit him and ran about 15 yards, The blood trail was unreal,Like a garden hose. that was cool. Moral of this story, Wait for a good shot position and try one again, you should be dissappointed.

February 03, 2011 at 1:25am
A comment titled: Awesome in response to a report titled: Blind Retriever

This goes to show you a mans true best friend. I'm glad you didn't just give up on him. Although he can't see anymore, he still get to do what he loves to do, not retreiving ducks, which i'm sure he loves it, but make you happy and be by your side in the blind. This is what its about, you adapting to his disability and making it work. Thats a cool video. LA sportsman should do an article on you two. Best of luck for the rest of the season to you and Gator, Keep up the good work Gator,Happy New Year!

I thought it was illegal to use a rifle in St. Charles parish?

I tell you what. That was a great story. I know you made alot of people laugh and smile with that one. good job lil man!!! Congrats!!

Ray Charles could tell that that is TEAL!!!
Ya'll need to go back to school.

mud man_500 has not filled this section yet.