Where does everyone launch at Lake Verret? We went yesterday and launched at Attakapas...which was flooded. I've heard of launches on the north shore, but not sure where they are. Also, where is best fishing in there? We fished the east shore just north of the landing and did ok, caught catfish and bream. Looking forward to going back, seems like lots of good fishing all over. May try the west bank across from Attakapas next time. 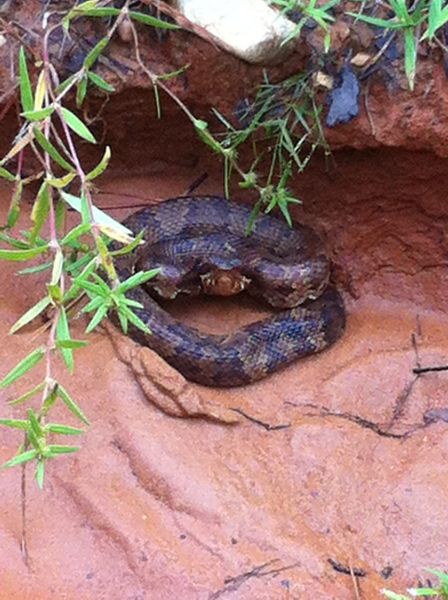 Anybody know what kind this is? Originally I thought it was a cottonmouth, but the bands on it are making me think other wise. It's not a rat or chicken snake. Definitely looks to be poisonous by the shape of its head and you cannot really see it, but it did have the 'cat eyes.' 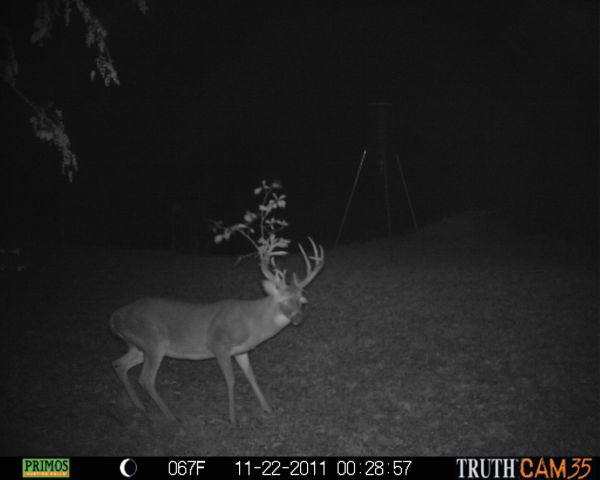 joined a club in Arkansas, then set up extra feeder and camera behind my house. Got home, checked the camera and saw this.

Who sets the amount of the fine of a citation issued by the LDWF?

Anybody know what happened to the guy selling the tow ropes? 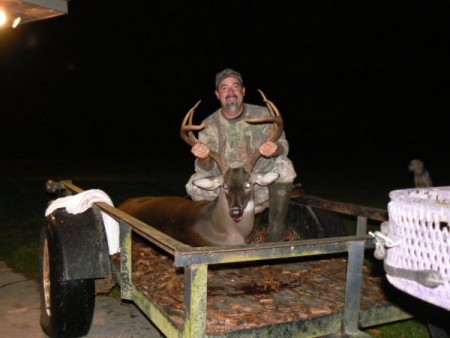 I got an e-mail yesterday of a big deer being killed inside the city limits of Denham Springs. Wow!! Here is the story, "I shot this huge 8pt Friday afternoon in my neighbors," John Ed the man," back yard after 3 years of trying to catch up to him. My opening day hunt on Thursday afternoon was rudely interrupted by two of our other neighbors dogs coming into my feed pile at prime time and deciding to do the wild thing. After several attempts to distract them I decided the best thing to do was to get and down kick the s### out of the dogs and try again on Friday. I thought kicking was a better alternative than shooting. This is what you get when you hunt urban deer. Oh well. Friday afternoon I get on the stand a 6:00 and start listing to the Denham Springs high school football game, as the high school is maybe 1000 yards from my house. Sounded like a good game. Around 7:00 pm a doe comes into the field immediately followed by the two monster bucks that I have sent most of you pics of for years thanks in ALL to John Ed. To my amazement they came directly into the feed pile and at that moment I knew this was more than likely the only chance I would at this buck all year. John Ed and I both felt that if I did not get him in the first few weeks he would go totally nocturnal like he has done in years past. I let them feed for a few minutes then pulled up my crossbow, put the cross hair on his shoulder and let it fly. I heard the thump and he dropped in his tracks! Of all the deer I have harvested over the years no words can describe that feeling at that moment. I got off the stand and his head was still up so I decided to put one more in him to finish him off quickly. I have not scored him yet but here are some rough measurements. 26" main beams, 5 ? bases, 19 inside, 11 and 12" G2, 5 ? tines, 6" G3's."

Rode over to Pierre Part yesterday (Sunday, 5/17/20) to check out those two launches on the north end of the lake. Good Lord is that water high!!! Gaudet\'s is still open with $5 launches. The other one (Bayside Launch and Tackle) looks nice as well, but has the long ride thru the no wake zone. The parking area at Gaudets was covered with about 3\' of water. Started to drive down and take a look at Attakapas, but I could only imagine how much water was down there. Probably going this Sunday, pending weather, and launch at Gaudets. Had some people down there loading up and said you can launch at Bayou Corne also. That launch is about 5 miles before Pierre Part on the left hand side, Sportsman\'s xxx (can\'t remember the name of it). It looked to be a nice landing too. Just need to find a bait shop somewhere btw Walker and there.

Great buck and even better story!!! Persistence pays off.

December 06, 2013 at 1:21pm
A comment titled: freak in response to a report titled: Louisiana Freak!

I too, would think about letting him walk just to see what he would look like next year.....but, the guy in the next stand or club would take him out at first sight. If you see him, drop him!!!!

November 06, 2013 at 8:48pm
A comment titled: Babies in response to a report titled: Water kind Snakes

What school were they found at? I've heard them called 'Stump-tail moccasins' bc of the yellow tail. But it seems the yellow tail is just them being juveniles.

I poked it with a stick and he slithered on into the woods.

That's what I thought. Thanx guys.

August 02, 2013 at 8:57am
A comment titled: other landing in response to a report titled: Bayou pigeon launch

This one....'Hwy 75 west from plaquemine, get to jack millers and go south for about 11 miles. Then go right over the bridge' to the stop sign, turn left and there is a landing about 1/2 mile down over the levee.

What landing is to the left after you cross the floating bridge? That's the one I use.

'Great catch! What is in the cans at the crawfish boil. looks like they have holes poked in them.'

Mary voted FOR the dems budget that reduces the deficit by 1.?? trillion over the next decade; when only the week before Rand Paul submitted a budget that balanced the deficit in the next 10 years. Time for Mary to go!!!!!

March 31, 2013 at 12:55pm
A comment titled: Been there, done that in response to a report titled: Christmas kindness on the water

So what was the magical bait. Years ago, my dad and I were fishing back in the Harrison Property and there was another boat maybe 100 yards away. We were pulling in speck after speck and noticed they weren't catching anything. Not sure if we are they trolled over, but we met up and they asked what we were using...Saltwater Assassin Electric Chicken, gave them a pack with about 4 or so left and then they started catching too. Remember guys, there are plenty enought fish to go around so be kind and help out fellow outdoorsmen.

That will make for a rememberable trip!!! Hope you bought the insurance!!

December 20, 2012 at 11:36am
A comment titled: Don in response to a report titled: Game processing near Walker

I know Mr. Don. I went to school with Dean.

November 15, 2011 at 2:09pm
A comment titled: Pic in response to a report titled: unidentified picture

Clearly that is a sasquatch. Better call the Discovery Channel.

Call Sonny's on Devall Rd in Central. I think the name is Wildlife Artistry or something like that.

November 30, 2010 at 1:22pm
A comment titled: Well here's where this is coming from in response to a report titled: LDWF citations

Hunted Russell Sage on Friday. Shot a doe and drug her out. GW is coming down the road and stops. This was my first kill ever. He gets out and looks at it and says, 'why isn't this deer tagged?' I told him that i forgot to do it and that this was my first ever deer kill and I was excited. I had the tags in my back pocket in my wallet. Insteady of just giving me a warning he says, 'I have to issue you a citation.' I told him couldn't he just give me a warning. He said no that they were pretty serious about the tagging. Call this morning to the Ouachita DA office to get the fine. Get this crap...$291.50 for not having a piece of paper on a deer. This is total BS. I'm stuck. No way to fight it, b/c it was not tagged and I'll admit that, but come on $300. To me that is f'ing outrageous. Here's a pic of the little money bag.

November 29, 2010 at 9:42pm
A comment titled: Harrison Property in response to a report titled: Great Weekend

The Harrison Prop still open? Haven't been down there in years, since before Katrina. How is the fishing in there now?

From the e-mail I got, it sounds like it came west of DSHS towards the river. That's what I would think.

Have you sent it to the LDWF? They are asking for pics of bears and the area where they were seen.

04GREENZ71 has not filled this section yet.