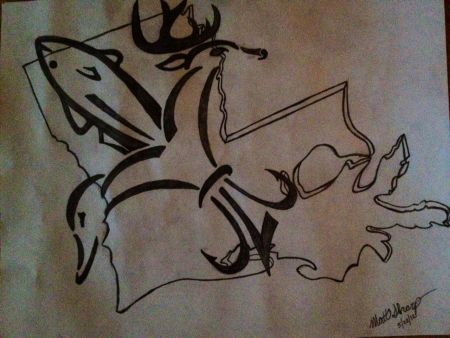 Buck in rut in St. Francisville

photo shopped in response to a report titled:  2 headed deer

Buck in rut in St. Francisville 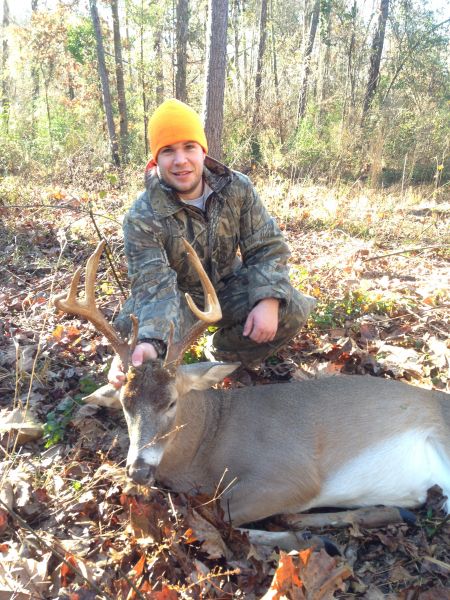 On Jan 12th, I sat in one of my lock-ons I usually hunt during bow season, its down on the creek and had the right wind. At 7 am I saw a doe walking right at me, surprisingly walking with the wind at her back through some brush. When she got about 30 yards away she took a 90 degree turn to my right and disappeared off into the bushes. Fifteen minutes later a spike followed the same path, but he missed her turn and lost her scent. He came straight out in front of me less than 10 yards away just looking around walking in circles confused about where the hot doe went.. He gave up after 5 minutes of walking around the open sand flat and walked off crossing the creek off to my left. Ten minutes later my uncle, who was sitting a half a mile away from me on the back of our property text me saying he hasnt seen much but a bobcat. I told him what had happen in my location and said well hopefully a bigger buck will make that same mistake. Sure enough not 5 minutes later I spot a nice buck crossing the creek about 50 yards away and getting on the does path. Well naturally my gun is raised and I flick the safety off just in case. I spot him only for a second hoping to catch him before he follows that does path to the right. Well I lose him in the scope because of the thicket hes in and start to panic that hes gone... I peeked over my scope and see him standing at the edge of the sandy flat, only 25 yards away, trying to remain concealed. I instantly move my gun to him; being so pumped I wasn't careful and hit a small branch... he looks right at me. Luckily my stand is in a double tree and my lock-on is on the back tree using the front one for cover. He doesnt spook but I wasn't wasting any time. I put his chest in the cross hairs and boom! He locked up like a statue and tipped over to his left to where I couldn't see him lying on the ground behind a tree and some brush. I knew he was there though and beyond excited I text my dad 'BBD!!!' and probably everyone else in my phone. Lol I couldn't stop shaking with excitement so I called my uncle and told him I didn't know how big he was but it was a good buck and everything I had just text him actually happened! Finally I got down to see what I had dropped in its tracks. I was very pleased to see what was lying in a pile of blood! My buddy who is a taxidermist scored him at 123 2/8 and he weighed in at 182 with a 20 1/2 inch neck. What a great hunt! He's beats my bigger deer, my 8 pt. bow kill by 2 inches. 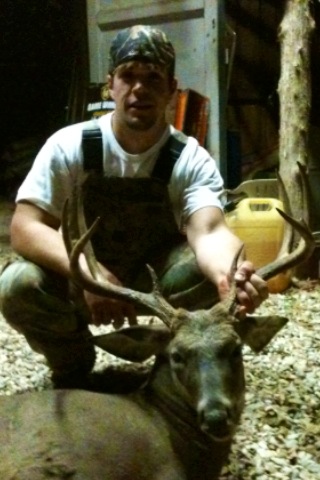 I saw that same exact picture on facebook but the deer had 3 heads.. it had the same exact doe head on each side of the little bucks head. People will do anything to get a rise out of others. Sorry buddy but that picture is a joke.