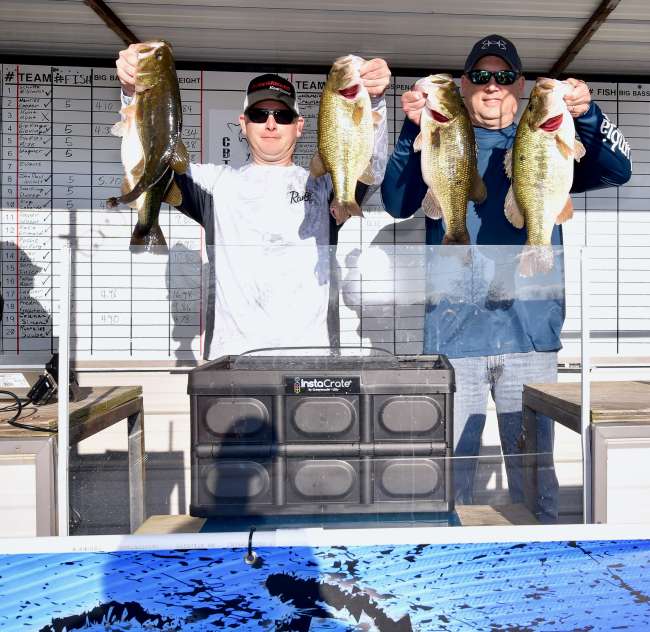 The very first ever CBT event is in the books! On February 1st, thirty-two teams showed up to the Delacroix Corporation launch ready to fish the many miles of Louisiana Delta in hopes of besting some of the strongest competition in the area. Strong Northwest winds and low tide couldnÃ¢â¬â ¢t stop these dedicated anglers from sacking up some serious tournament weights. 13 of the tournaments 32 teams had weights of over 14 lbs., with the tournamentÃ¢â¬â ¢s biggest bass running the scale up to 7.46 lbs! In this event it took a tremendous 24.58 Lbs. of a five fish stringer to take home first place. It also took a 7.46 lb. behemoth of a Bass for the biggest fish honors. The team of Ross Watkins and Reese Watkins were fortunate to take home both of these top honors netting them a total winnings of $2,140!!! Our next event is March 14th out of the Delacroix Corporation launch in Caernarvon La. and is an open event to all who would like to join us. Please come out for what appears to be the hottest up and coming Bass Tournament Circuit in the area! Look us up at Caernarvon Bass Trail on Facebook for all the details and contact info! Big thanks goes out to all of the anglers who participated, as well as all of our sponsors, tournament officials, and others on the sidelines who helped us put this together! 2020 Sponsor List: Skeeter/Yamaha Dockside Marine Delta Lures Danny AC-Heating & Electrical Beaus Fabrication and Welding Mirror Image in Slidell Matrix Shad Mike Campion Photography Sunbelt Supply Co. Bill Lewis Lures Puglias Sporting Goods Tournament Director: Terry Jones 985-255-2136 Thank you to Louisiana Sportsman for lending us this platform to post!

Pearl River Team trail is having their 2nd team tournament of 2014 this Saturday 3/8! Blast off is at safe light out of the East Pearl boat launch hwy 90 at Pearlington! Weigh in is at 3! 5 fish alive 12' minimum! 80$ per boat with optional 5$ big bass and a one time 10$ membership fee which pays for trophys/plaques for every tournament. 1000$ GAURANTEED with 25 boat entries. We had 15 boats at the first tournament! Call Charlie for any additional information needed 985-960-6936!

Pearl River Team Trail is having its first tournament of 2014 this saturday 2/8 at the East Pearl boat launch on hwy 90! 80$ per boat with optional 5$ big bass. 10$ membership per person which pays for trophys at end of season for top six anglers. Gauranteed 1st place 1000$ with 20 boats! Tournament starts at safe light and weighs in at 3pm. PRTT will have a tournament on the 2nd sat. of each month thru september! Come out and have some fun and possibly win some money! Call Charlie for any questions 985-nine six 0 six 9 three six!

tjones123 has not filled this section yet.