Looking for an AR-9 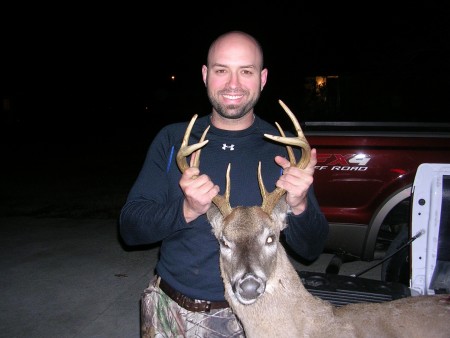 I'm posting this story to inform hunters about the satisfaction that I had when I finally found my biggest buck. I made an evening hunt Tuesday, January 5th. Rut is in full efffect right now, so that definately helps. Anyway, I had a broadside shot @ 20 yards right before dark. I pulled back on my Hoyt, lined up my pins, and said my prayers as I let my arrow fly. I got down out of my stand about 20 minutes after I shot and was hoping that I had made a good hit. After looking for a few minutes I found blood. I started tracking using my bloodlight and was picking up a good blood trail. After tracking for a couple of hours and talking to my friends I decided to let him lay up for the night so he could die. It was supposed to be in the 20s that night so I wasn't worried about the meat spoiling. I was confident that I would find him the next morning. A friend of mine came with me the that next day to help me look for him. We picked back up on the blood trail and looked to be making process right away. Well after 5 more hours of tracking and getting my hopes up and then getting dissapointed over and over again my friend had to leave. I left and got a beagle that had found a few deer for us before. Well wfater a good 3 hours of running this trail, "Rocket" was wore out and I decided to take him back. I was all out of answers until another friend of mine called and said he had a bloodhound that was just over a year old and he wanted to try and help me find this buck. So we started tracking again after dark. The dog "Buck" was doing good at first and then he lost the trail. Didn"t take him long though and he was back on the trail. The last 50 yards that he was tracking I didn't see any blood. I was thinking that I had no chance of finding this deer. We he finally got close he threw his nose up in the air and let us know we were close. 5 yards away there was my deer. It was a great feeling knowing that I didn't give up and found the biggest buck I'd ever shot. Not to mention the help that I got from some good friends that were just as excited as I was that we found it. So after 16 hours of tracking and wanting to give up so many times I finally got this nice 10 point!

frog22 has not filled this section yet.