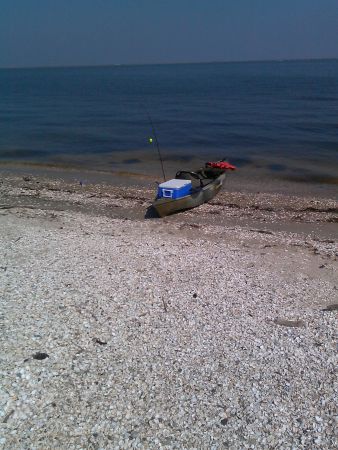 Im an experienced fishermen. I sold my kayak earlier in the year and havent been fishing all year. Whoever needs a fishing partner give me a call or reply to post 5044357653

I went fishing today in port sulphur fished for about 5 hours and didnt catch anything. I paddled into 3 or 4 pounds about 5 ft -1ft of water with hundreds of reds busting bait and wasnt able to catch i tryed dead shrimp midnight mullet matrix shad nothing any reason why werent they feeding on what i was throwing

Making a trip to buras sat morning. Looking to catch some specs, flounder, reds. Not wanting to go far im fishing from a kayak but if its a must i will. I`ll be starting from Quarantine bay. I never fished this area will the trout be somewhere near Quarantine or where abouts. If not where to find the flounder and what bait to use to land a few also never caught a flounder so it will be an experience. Any advice would be appreciated.

Weather been rough last few week. I usually fish Lake hermitage and the marshes in adams bay in empire. Wondering if anybody want to make a trip next weekend up for any suggestions

I went a little late yesterday morning In the yak to try out my new istabilizer tripod it extends from 14inches to 3ft. It worked well to say i didnt have a mount for it but a flush mount would work miracles. I used my smartphone but theres only so much you can record at once. Is there a one button click to record or voice command to record on gopro it should right its only $299 lol.any help with the gopros and how to operate one

Im takin a trip to lake laurier saturday in the yak... Northeast winds from 7am to 1pm the change to eastnortheast... What wind would be best to fish, early NE or ENE, i know south winds are the best just never fished a north wind...

Im looking to buy a freshwater trolling motor. Can it be used in saltwater without it breaking on me the first few times.....

Im looking to buy a freshwater trolling motor. Can it be used in saltwater without it breaking on me the first few times.....

I want to go on the edge of the gulf to fish for some jacks, bull reds, and monster trout...The marsh will never get old i can fish it everyday, but im ready to catch some real fighters that will put my 40lb braid to the test...where to catch jack crevalle, bull reds and those trophy trout besides grand isle and venice... What baits for the jacks and how far any help. 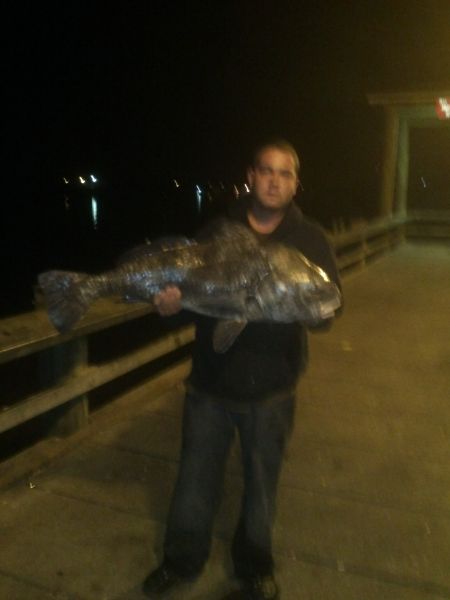 These were some monsters 37 and 40 inch black drum caught on 20lb mono honestly these fish were not 20lbs but the lord helped me to bring em on to the rocks, if you ever been on the laffite pier you know what im talking about.

I been itching to fish the trestles in search of some trout and flounder. Im looking at goggle maps to see if i can launch closer than having to drive across the twinspan. I need alot of info first time fishing lake p tresles. I dont need to worry about my kayak its stable more than enough. Where can i pick up some live or market shrimp close to where i will be launching any info would be nice. Planing on going tomorrow or saturday. 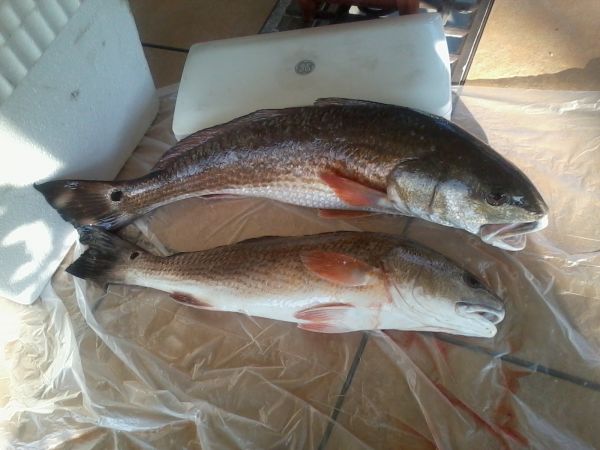 Caught these nice keepers with a few more throwbacks down hwy 23 bayou hermitage.The winds were pushing me all around yesterday. Is there anyway to make a homemade anchor without spending a ton of money? I usually paddle right on top the marsh for the wind not to move me around but yesterday I was in half open water and half marsh where current was picking up strong. Any tips would be helpful. 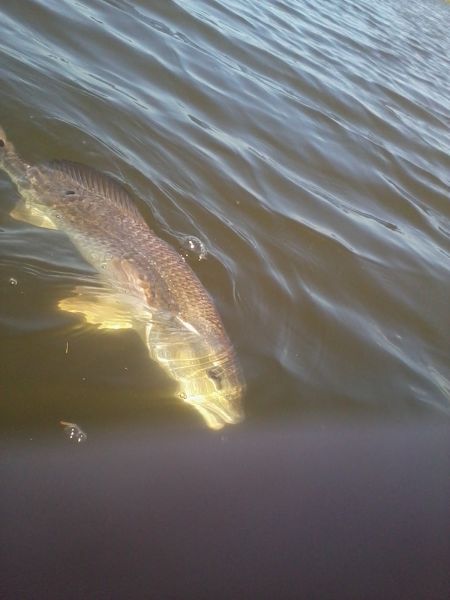 Wasnt to hyped about fishing the marsh without live bait friday, never had any luck with market bait besides gaftop and crabs I can catch those every cast. I went for it anyway, got a pound of dead shrimp and headed to the bayous. Landed a limit with 5 reds 1 rat 1 big gaftop. Market shrimp is now on my bait list plus alot cheaper since live shrimp are going for 30¢ a shrimp at myrtle grove marina.

September 16, 2012 at 11:37am
A comment titled: fishing partner in response to a report titled: East pt al ahache

February 28, 2014 at 9:17pm
A comment titled: Myrtle grove in response to a report titled: Specks coming in!

September 26, 2013 at 8:14pm
A comment titled: How about quarantine bay in response to a report titled: Fishing Partner

Im thinking empire this sat. I want to make it out to kelly gap close to black bay. Never been but i know it would be worth it. That area been on fire reds and trout but im up for other areas. What you got in mind bro.

Where do you usually fish at. I fish in port sulphur most of the time. Lets make a yak trip.

Thats what i was thinking. Im launching at river side across from buras boat harbor at and fishing quarantine bay and all throughout. Im going to paddle to kellys gap also. If i cant found trout theres always a way to limit out on Reds and drum.

Is there any other way to catch trout without having to go 5-8 miles to the rocks. Which side should i go on ostrica or joshua. Is yaking out the question for finding trout. I know ill be able to find the reds but those darn trout at this time of year are far out.

Samarai Sent you a pm

July 28, 2013 at 4:16pm
A comment titled: Hopedale in response to a report titled: Rookie after Reds

If you fishing the hopedale area launch either at pips boat launch or campos marin. They both should have live there. If you fishing for speckled trout you wont find em close you will have to make a run to black bay or Bay Eloi and im sure your boat can handle it 100% just take it easy and go on a south wind. Now for reds they should be stacked up all around from the lagoon to bayou grande. My Go to baits are saltwater assassins bright colors and normal life like colors to mimic the bait fish. You cant go wrong tipping the hook with a piece of shrimp when you fish with plastics. Bring back a report on how your trip went.

July 28, 2013 at 9:23am
A comment titled: lake hermitage in response to a report titled: Questions on NorthE & EastNE winds

Lake Hermitage was sucsess. Actually i didnt fish the lake, i fished the deep canals around it... So shallow i got out the yak and fished the bank.

April 23, 2013 at 12:41pm
A comment titled: north winds in response to a report titled: Questions on NorthE & EastNE winds

North winds helped out after all... A limit of trout before i got hungry! The water was low but bait was everywhere... Seen reds tailin so i counted my fish to see how many i had, shurnuf a limit of some shakey heads. I didnt bring any reds home but a cooler full of trout is good enough for me...

Grand isle would be my best bet no doubt but i was thinking hwy 23... grand isle to far a last min trip any other suggestions

April 05, 2013 at 10:28pm
A comment titled: Sting rays in response to a report titled: where to launch to fish the tresle

No luck today. Fished with dead shrimp and caught sail cats and sting rays all day trash fish. Could of took this nice catfish home and fried it right up but instead I threw it back in hopes of some drum sheepshead trout or something worth keeping.

October 06, 2012 at 10:12pm
A comment titled: Southshore in response to a report titled: where to launch to fish the tresle

Yeah I have paddlecraft not a propel so I want to launch close to the tresle to catch some decent fish im on the southshore ill be coming from gretna.

October 04, 2012 at 10:09pm
A comment titled: Dumbell in response to a report titled: Bayou Hermitage

Im going for the dumbell real simple and i didnt have to go anywhere and spend a penny 5LB dumbell should work I already had a thin dock rope so im good to go.

October 04, 2012 at 5:29pm
A comment titled: Pvc pipe in response to a report titled: Bayou Hermitage

You talking about pushing the pvc pipe into the mud then roping it right, cuz I tryed using a 8ft bamboo stick and roping all it did was go to a slant and push off. Ive seen people use thosr pvc for push poles in the yak.

October 02, 2012 at 1:20pm
A comment titled: Window ballest in response to a report titled: Bayou Hermitage

Haha and I was just working on a house that had one on each side. Would you beable to find those old things around anymore? That does sound like a easy anchor and not much to toat around.

October 02, 2012 at 1:07pm
A comment titled: Safety first in response to a report titled: Catchin reds in my yak down in Port Sulphur

I never leave with out my life jacket, im not worried about drowning im more concernd of gettin fined im in 3 feet of water plus I got a native ultimate 12 very stable